Consciousness hidden in the brain fissure

Consciousness, informally stated as the subjective feeling of being, comprises of two basic components—arousal (wakefulness) and awareness (awareness of environment and self). Although the posteromedial cortex (PMC), an area hidden in the posterior interhemispheric fissure, has been a strong candidate for awareness processing, selective lesion of the PMC has not been reported previously, and it remains unknown whether the lesion of the PMC indeed impairs awareness.

We reported the first case of a lesion under the left PMC impairing awareness. The patient in this report was a 60-year-old right-handed woman who experienced impairment of awareness due to a head injury. Computed tomography (CT) on admission showed left subcortical hemorrhage; a brain surgery was performed. Postoperative magnetic resonance imaging (MRI) indicated a focal lesion under the left PMC (Fig. 1A), in addition to a lesion over the left sensory and motor cortices that were associated with paralysis of the right limbs. 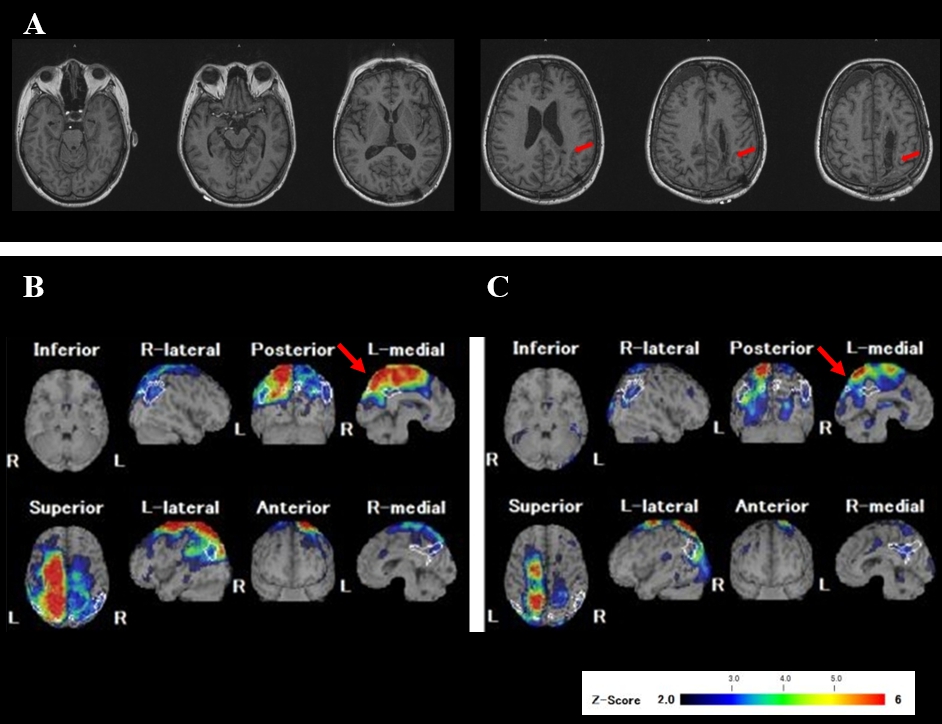 Fortunately, the patient’s impaired awareness (technically called the minimally conscious state) recovered to that before injury, which enabled the comparison of cerebral blood flow (CBF) with and without awareness disorder in the same patient using single photon emission CT (SPECT). The results clearly demonstrated the distinct involvement of the PMC in the recovery of awareness (Fig. 1B and C), which was also associated with diffusely increased CBF over the bilateral fronto-parietal cortices and cerebellum.

The cognitive symptoms during the course of recovery was intriguing. Communication during the initial stage of recovery was associated with the lack of a first-person perspective (or self-perspective), whereas responses were repetition of spoken words (echolalia), or imitation of gestures. Furthermore, despite the absence of demonstrable lesion over the frontal lobes, deficits in the executive function, a cognitive function controlling behavior (ordinary behaviors, such as brushing teeth), were noted. Because the executive function is processed in the frontal lobe, this observation suggests the potential involvement of the PMC in addition to the frontal lobe. Indeed, the PMC has extensive connections with higher-order association cortices; the precuneus and prefrontal cortex are strongly interconnected by the long-distance tract. These symptoms were ameliorated substantially, and the patient was eventually discharged home.