The goal of this research work is to transfer “network knowledge” from a data-rich model plant, Arabidopsis, to rice, to enhance the identification of nitrogen gene networks in a data-poor crop. Our working example for this study is rice (Oryza sativa) because it is one of the most important human food crops, in addition to be an excellent monocot model for genetic, molecular and genomic studies. We have focused on nitrogen (N)-regulatory networks, because nitrogen is the rate-limiting essential element for plant growth. This approach has the potential to enhance translational discoveries from Arabidopsis to rice with the goal of improving plant N-use efficiency, which will contribute to sustainable agricultural practices by diminishing the use of N fertilizers. 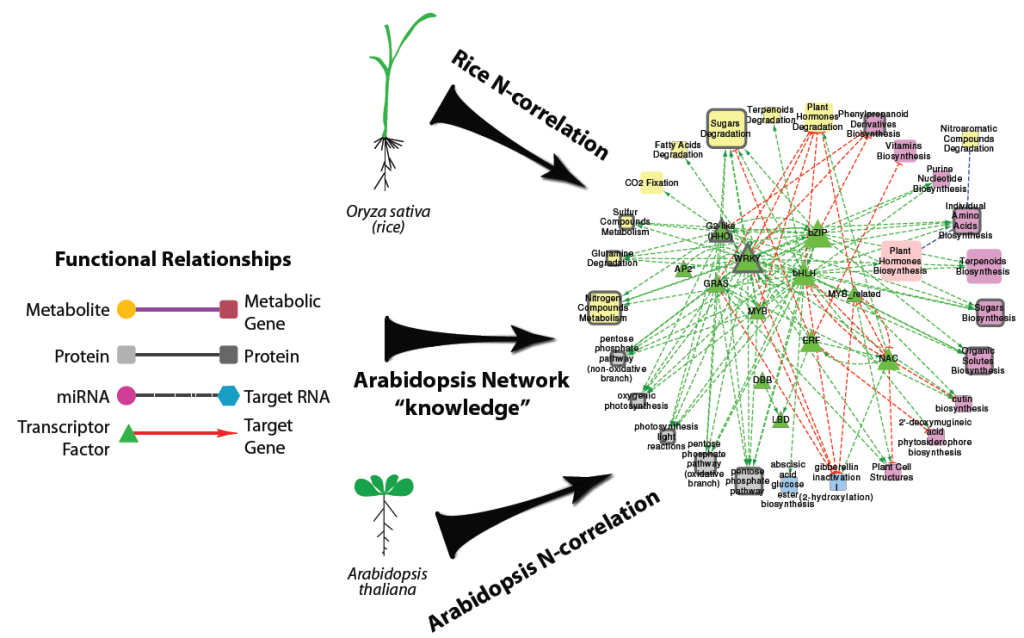 The N-regulated gene network generated in this study includes N-response transcriptome data we have generated and metabolic and protein-protein interactions from publicly available Arabidopsis and rice data. Despite the fact that much of genomic and systemic rice data has been generated over the past years, a lot of information is still missing. For example, Arabidopsis has much more gene interaction data with regard to cis-binding sites and protein-protein interaction. To fill these gaps in rice “network knowledge”, we integrated orthology-based Arabidopsis interaction data and searched for functional Arabidopsis cis-binding sites in rice, to identify N-regulatory network modules and biological processes conserved between dicots and monocots.

The outcome is a cross-species network that has uncovered N-regulated network modules conserved across rice and Arabidopsis. To do this, we first generated a N-regulatory network based only on rice N-regulated transcriptome data that we generated and available gene interaction data (RONN, Rice Only N-response Network). Next, we enhanced the “network knowledge” in the rice N-regulatory network using gene interaction data from Arabidopsis (RPNN, Rice Predicted N-response Network). Finally, we imported N-response transcriptome data from Arabidopsis and rice plants exposed to the same N-treatment conditions (RANN, Rice-Arabidopsis N-regulatory Network). Specifically, this RANN network comprised a conserved network of 182 N-regulated genes that include 23 N-regulated transcription factors (TFs) which are predicted to target the same genes and network modules in both Arabidopsis and rice.

Supernode analysis of the TFs and their targets in this N-regulatory network and conserved modules between rice and Arabidopsis uncovered genes directly related to nitrogen use (e.g. N-assimilation) and to other shared biological processes indirectly related to nitrogen. This cross-species network approach was validated with members of two TF families in the supernode network, bZIP-TGA and HRS1/HHO family, each of which have recently been experimentally validated to mediate the N-response in Arabidopsis. Thus, by translating gene “network knowledge” from the data-rich model Arabidopsis to rice, we identified evolutionarily conserved N-regulatory modules that may be used to improve N-use efficiency in transgenic plants.