Control of cell identity by the nuclear architecture

In a complex organism, all cells use their identical genetic potential to differentiate into a variety of cell types characterized by different morphology, nuclear shape and function. This is possible because only a small subset of genes is transcribed in a given cell at a given time. The differential usage of the information stored in the genome and its plasticity is controlled by epigenetic mechanisms; these, by modeling the chromatin, fix transcriptional programs in time and space and contribute to cell-identity determination and maintenance. The evolutionarily conserved Polycomb group (PcG) of proteins are key transcriptional repressors which, by forming aggregates in the nucleus and mediating chromosome looping, play central roles in cell differentiation and the maintenance of cell identity. 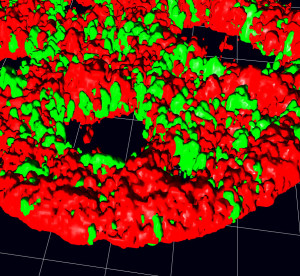 Although several findings finely dissected and described the PcG functioning at the chromatin level, no studies have yet been addressed to understanding the interplay between PcG proteins and the components of the nuclear architecture, also involved in transcriptional repression. In our work we have investigated the functional crosstalk between PcG proteins and one of the major components of the inner nuclear membrane: the Lamin A/C protein. We used distinct model systems (murine and human muscle differentiation in vitro, murine satellite muscle stem cells and drosophila) to show that the integrity of Lamin A/C is evolutionarily required for mediating PcG protein functions at various levels. Being part of nuclear membrane Lamin A/C is mainly found at the nuclear periphery. Interestingly, a small fraction of Lamin A/C is also present within the nucleoplasm, although its function in this nuclear compartment remains unclear. We demonstrated, for the first time, that a subset of Lamin A/C molecules interacts with PcG proteins in the nucleoplasm. Super-resolution microscopy further revealed a non-random distribution of the two proteins, with PcG foci embedded in the nucleoplasmic Lamin A/C (Fig. 1). Functionally, reduction of the total amount of Lamin A/C leads to a diffusion of PcG proteins altering the correct PcG nuclear compartmentalization. In parallel with PcG foci erosion, we observed a reduction of PcG protein chromatin binding and an impairment of PcG-dependent DNA looping, finally leading to a transcriptional activation of PcG target genes. In the muscle differentiation model, all these aberrant events lead to an acceleration of the myogenesis accompanied by the appearance of a subpopulation of cells, which fail to enter the myogenic program.

As a whole all these evidence suggests that the nucleoplasmic network of Lamin A/C molecules constrains PcG proteins by confining them in discrete foci. Such a nuclear architecture is necessary for the correct PcG chromatin engagement and the formation of DNA looped structures, ultimately enforcing PcG protein–mediated transcriptional repression.

In recent years the study of the epigenome and its role in human disease progression has attracted considerable interest given its potential for developing epigenetic-targeted therapies. Such therapies could profoundly change modern medicine acting beyond the DNA sequence by epigenetically modulating gene products. Being an epigenetic regulator itself, Lamin A/C could represent a paradigm for translational epigenetic studies. In fact mutations in Lamin A cause a wide set of genetic diseases, named laminopathies, affecting one or multiple tissues. Interestingly, the same Lamin A mutation can result in different phenotypes and disease severity, even in the same family, suggesting that the individual epigenetic background is involved in the disease. Our research provides new insights into Lamin biology, describing for the first time a functional interaction between Lamin A and PcG proteins at the onset of muscle differentiation. This could inspire and motivate researchers to gain finally understand PcG proteins’ role in the aetiology of lamin-related disease pathogenesis and progression.