Control of doping in racing pigeons

Pigeon racing is considered a popular sport in several countries such as Belgium, England, Netherlands, Portugal, Japan, Taiwan and South Africa. In all these countries, pigeon racing is a federated sport and racings take place on a weekly basis with thousands of birds travelling hundreds of kilometers to return to their loft, as fast as they can. Pigeon racing involves a vast number of pigeons and humans, but also large amounts of money. Several thousands of dollars might be obtained after winning a race, as well as through selling pigeons presenting impressive records, that are then used for breeding purposes. The regulations of the different federations foresee severe penalties for pigeon fanciers that administer performance enhancing drugs for their animals since it endangers the health of animals and results in false outcomes with illegitimate prize assignments, ultimately ruining basic principles of animal welfare and fair play. 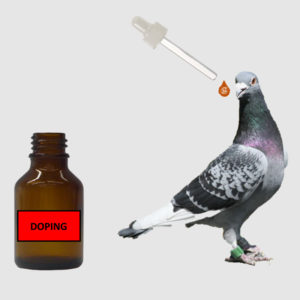 Unfortunately, it is widely recognized that pigeons are doped on a regular basis and general social media has reported several cases of doping in pigeon racing. Liquid-chromatography tandem mass spectrometry (LC-MS/MS) is considered the gold standard for doping control in species involved in sports such as humans, horses, greyhounds and camels. However, regarding pigeon racings, the few analytical methods priory published used immunoassays for the detection of doping agents in faecal matter. Currently, immunoassays are not considered sufficiently reliable to stand as a confirmatory method for the punishment of offenders in any sport – the risk of false-positive and false-negative results confines these assays for screening purposes. Therefore, this original research aimed at developing and validating a LC-MS/MS method for doping control in pigeons.

After interviewing several fanciers from the North of Portugal under anonymity it was concluded that beta-adrenergic agonists and corticosteroids are probably the most usually abused drugs for doping purposes. Both these classes of drugs enable oral administration, can efficiently improve the performance, ensure faster recoveries between races and can be easily purchased. Owing to the danger of routinely collect blood in this species, this conventional and widely used matrix cannot be considered in pigeons. As to urine, since it is combined with feaces in the cloaca, it is very hard to obtain without harming the animal. Therefore, faecal matter, a very complex biological matrix, remained as the only option to detect doping agents. The analytical method described below targeted three corticosteroids (budesonide, betamethasone and prednisolone) and one beta-adrenergic agonist (clenbuterol). Due to the already mentioned complexity of faecal matter the extraction procedure resulted from the combination of a two step liquid-liquid extraction using ethyl acetate at pH 9.5 with a solid phase extraction using OASIS HLB 3 cm3 columns to isolate the targeted analytes. Then, a LC-MS/MS analysis was performed with a single 15 minutes chromatographic run-time being enough to detect all the compounds of interest.

In order to conclude about the suitability of the method, a validation protocol was performed on blank samples spiked with the analytes. The combination of sample pre-treatment, extraction procedure and analysis were positively validated concerning linearity, recovery, precision, accuracy and sensitivity. Lastly, a proof of concept was also performed. Betamethasone was orally administered to two racing pigeons and the drug was successfully detected in their real faecal samples. This method might represent a solution for anti-doping laboratories around the world that struggle to control the use of performance enhancing drugs in pigeons.