Supramolecular self-assembly on two-dimensional (2-D) surface is a powerful approach to construct functionalized surfaces. In a self-assembly process, molecules assemble via noncovalent interactions such as van der Waals or hydrogen bonding interactions, and form periodic nano structures. Especially in terms of 2-D self-assembly, we can visualize and access to surface structures of molecular orderings at the single-molecule level by using scanning tunneling microscopy (STM). Moreover, an ordering pattern and surface property are fine-tunable by designing molecular shape and intermolecular interactions. For these reasons, self-assembly on 2-D surface is expected as a bottom-up strategy to create nano-devices. 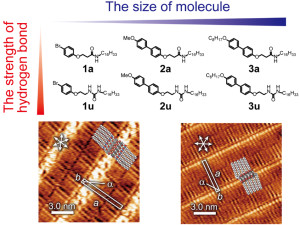 Fig. 1. Molecular structure of investigated molecule, and STM image of 1a (left) and 1u (right).

To design such 2-D self-assembly, it is important to understand and control self-assembly process. We focused on cooperative self-assembly, in which self-assembly pathways can be separated into slower nucleation process and faster elongation process. It can be a key concept to realize an unprecedented surface-confined self-assembly that is highly responsive to external stimuli. The functionalized surface designed with consideration of the growth mechanisms can be developed into sophisticated dynamic molecular devices.

In this work, we demonstrated that growth mechanisms at a liquid/solid interface can be quantitatively investigated based on the analysis of the concentration dependence of surface coverage using STM at ambient conditions. We developed a nucleation–elongation model for surface-confined self-assembly to investigate the Gibbs free energy for nucleation and elongation processes in the 2-D self-assembly. Based on a nucleation–elongation model considering molecule–substrate interactions at the liquid/solid interface, experimental adsorption curve can be well reproduced using two adsorption parameters, nucleation (Kn) and elongation (Ke) equilibrium constants. 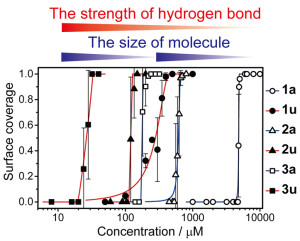 To discuss the effect of the strength of hydrogen bond on the self-assembly on highly oriented pyrolytic graphite (HOPG) surface, rod-coil-like aromatic compounds bearing amide (Fig. 2, 1a–3a) and urea group (Fig. 2, 1u–3u) were synthesized. Their self-assemblies at octanoic acid/HOPG interface were investigated by STM at the single-molecule level. Concentration dependence of surface coverage was quantitatively analyzed by the nucleation–elongation model for 2-D self-assembly. As a result, the plot of the natural logarithm of ΔGe against number of non-hydrogen atoms composing a molecular adsorbate follows a linear relationship. The slopes of the linear regressions for each amide and urea derivatives were almost the same. In addition, the difference in the strength of hydrogen bond between amide and urea groups can be clearly seen in the intercept of the plot. This result suggests that the strength of hydrogen bond (i.e., amide or urea) and the the size of adsorbate (i.e., size of core and length of alkyl side chain) play a primary role in determining stabilization energy during nucleation and elongation processes of 2-D self-assembly. This study gives a new viewpoint to design sophisticated molecular self-assemblies on 2-D surfaces.