Musa acuminata, is the scientific name of the wild species of banana that has reinvigorated interest in finding cures for diseases such as cancer, HIV and many more. The wild banana habituates the tropical and subtropical regions and has been widely used as traditional food in both fresh and cooked forms, as well as in traditional medicine by tribal communities of Southeast Asia, America, Oceania and Africa. All parts of this plant including fruits, peel, pseudostem, corm, flowers, leaves, sap and roots have found their use in the treatment of many communicable and non-communicable diseases by several ethnic groups around the world. Various ailments such as anaemia, blood pressure, diabetes, fever, cough, bronchitis, dysentery, allergic infections, and sexually transmitted infections have been reported to be cured by this plant in many forms. What does this mean for us? How can this underutilized wild crop, the humble progenitor of the edible bananas that we now savor in various styles work to help ward off diseases? 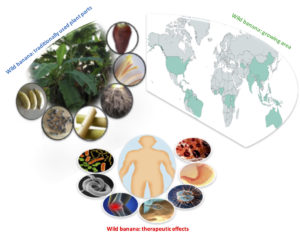 Our search across peer reviewed journals, ethnobotanical textbooks, and scientific databases about the wild banana and its use in traditional medicine reveals that wild banana fruits are rich in its nutrient composition, which can contribute to the Recommended Daily Allowance of vitamin C and minerals such as Potassium and Magnesium. Toxicity of the fruit is not a concern since various tribes and ethnic groups across the geographical boundaries of the world have been using it for years with no reports of illness and food allergies caused by ingestion of the plant. However, the fruits, which provides energy, vitamins and minerals in good amounts are rarely consumed by masses, which opens the door for development of novel food products with potential health benefits from wild banana.

The plant is reported to possess a rich diversity of phytochemicals that may be responsible for its pluri-pharmacological activities such as antioxidant, immunomodulatory, hypolipidemic, anticancer, and antimicrobial properties. The compounds isolated from wild banana have been traditionally claimed as anti-hypertensive, anti-diabetic, anthehelmintic, anti-HIV, anti-tuberculosis and effective against other respiratory diseases. Recently, wild banana has been used in the antimicrobial gel formulations, and the curative effect of wild banana in combination with Western medicine have been tested in clinical trials, however, the potential of some of the parts of this plant in disease prevention is yet to be explored. There are many promising phytochemicals present in the wild banana, such as Naproxen (anti-inflammatory), BanLec (anti HIV-1), and others that show promising wound healing, anti-tuberculosis and Leishmanicidal activity. Therefore, the potentials of wild banana needs to be explored for the development of new drugs or therapeutic agents that can help mitigate many diseases.