Shells of crabs and shrimps are a great resource for producing a variety of valuable chemicals. The exoskeleton of these animals is made up of a polymer chitin, which is the most abundant marine biomass on our planet. Chemically, chitin is a polymer made from nitrogen containing sugar called N-acetylglucosamine (Fig. 1). The structure of N-acetylglucosamine is similar to glucose, except for the presence of a nitrogen atom, which makes it useful for a wide range of value-added chemicals such as pharmaceuticals, cosmetics and functional polymers. Currently, the production of N-acetylglucosamine requires concentrated hydrochloric acid and a long-time reaction with enzymes. These methods are inefficient, which limits the use of chitin to small-scale purposes like health food. Consequently, most of the chitin is discarded as waste. Therefore, we need to develop an efficient and environmentally friendly process for utilization of chitin to a wide-range of applications.

Herein, we conceived a method to synergistically use physical and chemical force on the chitin molecule to produce N-acetylglucosamine (Fig. 2). Our hypothesis is as follows: applying tensile force on the chitin chain weakens the glycoside bond, which is then easily broken in the presence of an acid catalyst. In contrast, the tension has little effect on amide bonds, as they are present on side of the chitin chain. 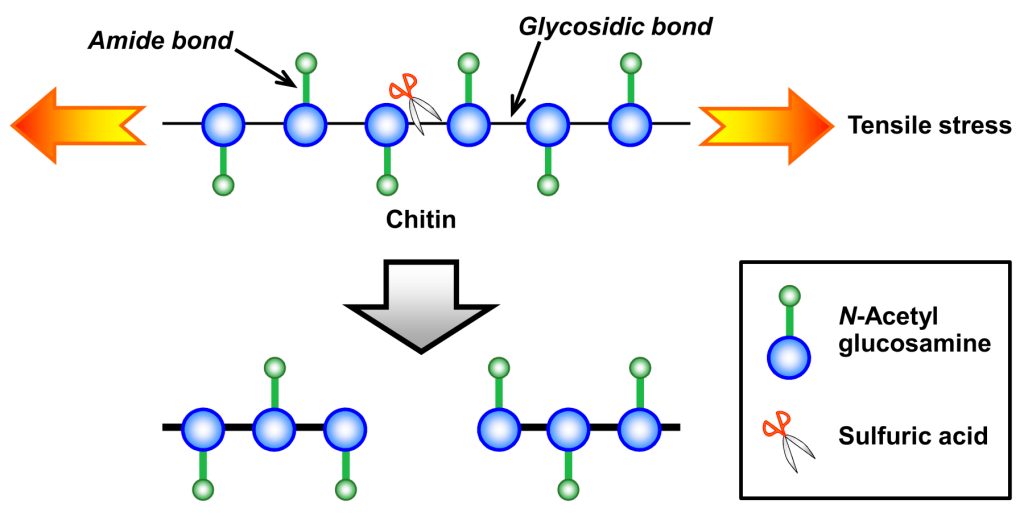 Our process successfully converts chitin to N-acetylglucosamine and derivative within a short time (Fig. 1). First, a very small amount of sulfuric acid is added to chitin, which retains the powder form of the material. Chitin is then added to a ceramic pot along with ceramic balls. The pot is then rotated at a high speed, which causes impact between the balls and wall of the pot. Chitin is sandwiched between the two colliding bodies and experiences tensile force. Then sulfuric acid selectively cuts the glycosidic bonds weakened by the tensile stress. This treatment produces oligosaccharides consisting of several N-acetylglucosamine units. The oligosaccharides are highly reactive and are easily converted to N-acetylglucosamine in hot water or its derivative (1-O-methyl-N-acetylglucosamine) in hot methanol with high yields. This process dramatically decreased the use of acid, compared with conventional processes. Moreover, the whole process was finished within one day.

N-Acetylglucosamine and 1-O-methyl-N-acetylglucosamine can be precursors to produce anticancer and antivirus agents. They can also be used to prepare new functional polymers in the future. Our system provides facile synthesis of the sugar compounds from chitin, which is the first step in enhancing the utilization of discarded crab shells.