Artificial enzymes were first described several decades ago and have become an ambition for bionanomaterial sciences. Artificial enzymes are small fabricated molecules that possess an active centre, which binds to a substrate and catalyses a chemical reaction. This is similar to a native enzyme but on a far smaller scale. Native enzymes are genetically coded proteins generally with large molecular weights and relatively small active site region. The challenge is to build an artificial molecule that can mimic the efficiency and activity of biological enzymes. Several scaffolds have been used to design enzyme-like molecules including inorganic nanoparticles, micelles, nanotubes, and nanofibres. Short self-assembling peptides provide an ideal template for the organization of a catalytic binding site. In this regard, α-helical coiled-coil self-assemblies and histidine-containing peptides were demonstrated to possess catalytic activity in the absence of metal ions. The incorporation of metal ion-binding sites into self-assembling β-sheet peptides has been shown to provide further catalytic efficiency. Native biological enzymes bind substrates via specific amino acid residues within the active site providing an ideal environment for the catalytic reaction to occur. The challenge for the design of enzyme mimics using short self-assembling peptides is to build a stereochemically favourable substrate binding site with ideally placed catalytic amino acid residues and metal ions. Short peptides have been shown to organize into very stable, cross-β structured amyloid fibrils that can be designed to fulfill these criteria to mimic natural enzymes. 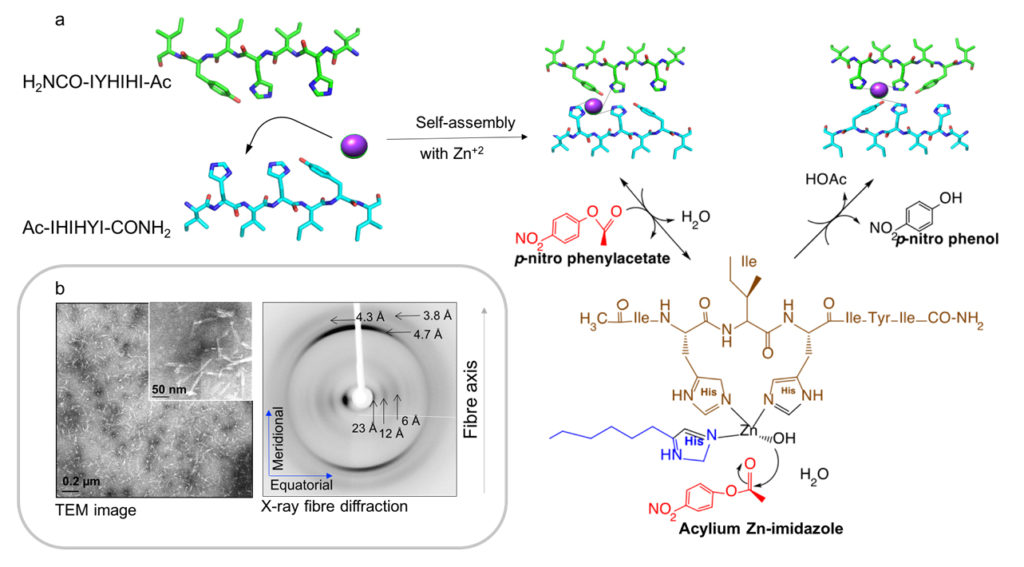 Fig. 1. The hydrolysis reaction of the substrate p-nitrophenyl acetate (p-NPA) by amyloid fibrils formed by a short peptide (seven amino acids). a) Image showing the structure of the peptide binding to zinc (purple sphere) and self-assembly to form an amyloid fibril architecture to create a catalytic site to hydrolyze p-NPA to p-NP and acetate. b) Electron microscopy image with zoom showing amyloid fibrils formed by the peptide in the presence of ZnCl2. X-ray fibre diffraction pattern was used to investigate the architecture of the peptides (shown in a) and to confirm that the peptide forms a cross-β amyloid arrangement.

Amyloid fibrils are most well known for their association with Amyloidoses and neurodegenerative diseases, such as Diabetes type 2, transmissible spongiform encephalopathies, Alzheimer’s, and Parkinson’s disease. Each disease is characterized by a different protein that misfolds and self-assembles to form amyloid fibrils that possess a cross-β structure. More recently, amyloid fibrils have been utilized as ideal scaffolds for creating artificial, functional bionanomaterials. The key advantage of using amyloids is related to the exceptional stability and rigidity of amyloid architecture through extensive inter and intramolecular associations. Hydrogen bonding between strands along the fibre axis with covalent and non-covalent interactions perpendicular to the fibre axis, support the folding into a highly stable three-dimensional structure.

We characterized the self-assembly and catalytic ability of several peptides designed to mimic  the enzyme, carbonic anhydrase. The active site was provided by the association of histidine residues binding to a zinc ion when the peptides self-assembled to form amyloid fibrils. We designed peptides with one or two potential metal binding sites which contained an alternating sequence of a polar, acidic (histidine) and a nonpolar (isoleucine) residues with a tyrosine at position six. The shorter peptide (one-binding site) showed significant catalytic ability and was more active than the peptide with two active centres (eleven amino acids). We showed that the catalysis of an esterase reaction resulted from the interaction between the Zn+2 with three histidine residues and a water molecule. Two imidazole moieties from histidine were contributed from one peptide in a β-strand and another imidazole from a neighbouring strand collaborated to coordinate Zn+2 (Fig. 1). The resulting catalytic activity was zinc-dependent. This along with the architecture of the cross-β amyloid structure, played a key role in ensuring that all amino acid side chains were optimally organized for substrate binding and catalysis. The designed amyloid enzyme showed excellent catalytic efficiency.