Cushing’s Disease – why is the diagnosis so difficult?

Cushing’s disease, named after the neurosurgeon Harvey Cushing, and caused by an adrenocorticotroph hormone (ACTH)-secreting benign tumor of the pituitary, is a rare illness. The pituitary is a gland at the base of the brain that secretes hormones which promote growth in children and control the function of all endocrine glands of the body, among them ACTH, which stimulates the synthesis of cortisol in the adrenal glands. Cortisol is necessary for the stress response of the body. It increases blood sugar, the metabolism of proteins, carbohydrates and fat, suppresses the immune system, increases diuresis and has effects on memory and mood. While the hormone is vital for life, prolonged overexposure has deleterious effects on the human body. 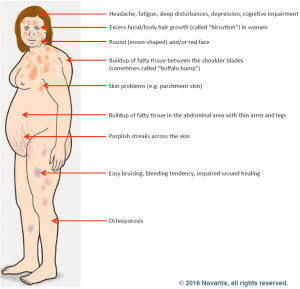 The individuals affected by Cushing’s disease develop a characteristic appearance, which includes central weight gain with thin arms and legs, fatty deposits at the neck, reddish stretch marks, easy bruising and abnormal hair growth. Hypertension, diabetes mellitus, osteoporosis, mood swings, depression and memory problems can also occur. Because the changes associated with Cushing’s usually develop gradually and overlap with many symptoms of the general population, the definite diagnosis is usually made years after disease onset. This is a bad situation since life expectancy in untreated Cushing’s disease is reduced. Once discovered, the pituitary adenoma responsible for ACTH overproduction can oftentimes be cured by surgery alone or in combination with other therapies.

In order to find out why it takes so long until Cushing’s disease is diagnosed, we systematically questioned 176 patients with the illness about their experiences with the diagnostic process. We found that 3.8+/- 4.8 years elapsed before diagnosis during which time patients consulted 4.6 +/- 3.8 (range 1-30) physicians. Symptoms presented by patients were various and oftentimes vaguely phrased such as “poor general condition” voiced to family physicians or very common in the field of the visited specialist (i.e. “skin changes” in dermatology). Hereby, our study showed that it seems to be one difficulty in the diagnosis of Cushing’s disease that patients describe isolated symptoms to the family physician or the specialists that fit into their fields of specialization.

So, how can a doctor differentiate between an otherwise healthy patient with diabetes or hypertension versus a patient who is developing Cushing’s? The rarer a disease, the less likely it is that one test or one symptom will be able to correctly identify it, even if it is highly specific. More than 50 years ago, the American physician Charles A. Nugent suggested the application of a mathematical rule, called Bayes Theorem, to the diagnostic process of Cushing’s Syndrome. Bayes Theorem relates current to previous probabilities taking into account new pieces of evidence. Nugent demonstrated that the likelihood of an overweight patient being correctly diagnosed with Cushing’s increases considerably when the specific symptoms of muscle weakness and bruising or certain laboratory results such as low potassium are included in clinical reasoning. This means that uncovering characteristic combinations of symptoms (and test results) is extremely important. In order to do that, the doctor must be aware of which symptoms go hand in hand in Cushing’s disease and learn the art of spotting these symptoms in addition to asking the right questions to bring forward information that the patient might not consider worthwhile forwarding voluntarily.

In this respect, patients’ help and feedback as given by the participants of our study is extremely valuable. The information on the diagnostic process, on how patients voice symptoms and their expectations on the health system can be used to train medical professionals to implement a more holistic, rather than symptom-oriented approach in order to recognize this rare disease earlier.