DARC – A light at the end of the tunnel

Glaucoma is the leading cause of irreversible blindness, affecting more than 70 million people worldwide. Visual loss is attributed to death of nerve cells, called retinal ganglion cells (RGCs), in the back of the eye. There is currently no cure for glaucoma, which is largely due to the lack of early diagnostic tools and reliable biomarkers that enable the prediction of disease progression and assessment of treatment efficacy, in a meaningful and cost-effective manner. We have developed a new technique that holds promise in providing a solution to this unmet clinical need. 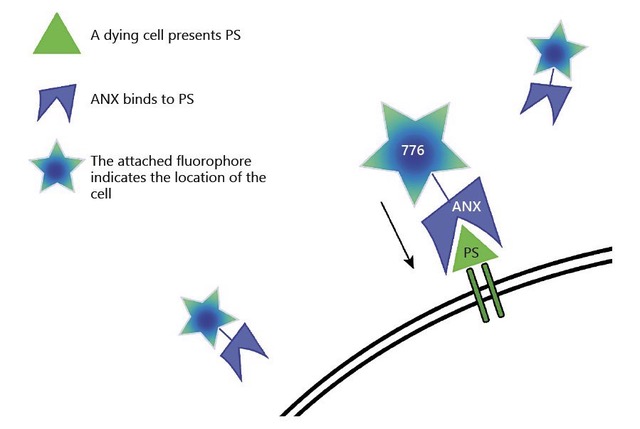 Fig. 1. A schematic diagram showing DARC technology. Annexin-5 (ANX) binds to phosphatidylserine (PS) on the outer leaflet of cells in the early stage of apoptosis. The attached fluorophore is then detected using a scanning laser ophthalmoscopy.

Nerve cell death in glaucoma is via the apoptosis pathway, a regulated process of cell suicide, so-called programmed cell death. Apoptosis is the earliest sign of glaucoma. Phosphatidylserine (PS), an early marker of cell apoptosis, is normally found on the internal leaflet of the cell membrane. However, when a cell is undergoing the early stages of apoptosis, PS becomes exposed on the surface of the cell and acts as an ‘eat me’ signal for phagocytes. Annexin 5, a human protein, is found to be able to bind to the exposed PS, selectively with a high affinity in the presence of calcium, thereby identifying early stages of apoptosis (Fig. 1).

We have developed a non-invasive real-time imaging technology, named DARC (Detection of Apoptosing Retinal Cell). DARC uses fluorescently labelled annexin 5 with direct visualization of the retina to detect the dynamic process of individual cells undergoing apoptosis. This is possible because of the transparent media in the eye, compared to other organs in the body, which allows direct observation of labelled disease processes as they occur in the eye. The technique uses an imaging device such as a confocal scanning laser ophthalmoscope (cSLO) with a laser beam necessary to excite the administered annexin 5-bound fluorophore (ANX-776) (Fig. 1).

Since the DARC technique was established in 2004, we have used it in various experimental disease models to characterize the natural history of disease and assess neuroprotective agents. Retinal cell apoptosis occurs not only in eye disease, such as glaucoma, but also in neurological disorders, including Alzheimer’s disease and Parkinson’s disease. For the first time, we have been able to observe real-time changes occurring at a cellular level over time when nerve cells are undergoing apoptosis. DARC imaging has been demonstrated to be a useful tool not only for early detection of apoptosis but also for evaluation of drug efficacy in those disease models (Fig. 2). 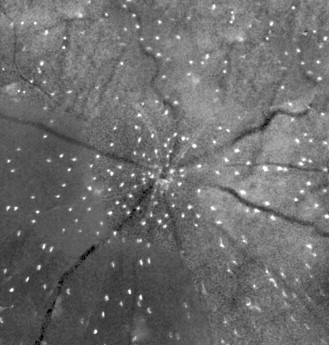 The challenge following pre-clinical studies was to reproduce the DARC technology in human subjects, to examine its potential as an early diagnostic tool and a reliable biomarker for disease progression. DARC has now been trialled in 129 humans with encouraging results. The DARC contrast agent – ANX776, has been shown to be safe and well tolerated. Moreover, artificial intelligence has been utilised to produce an objective measure of DARC activity. A key finding is that DARC can be used as a biomarker. In glaucoma, wet AMD, and Geographic Atrophy, the published clinical results show that DARC was able to predict future disease activity up to 36 months in advance. Further analysis of optic neuritis and Down’s syndrome cohorts will be analysed next.

Based on these encouraging results, DARC is now being utilised as an exploratory endpoint in a number of clinical studies around the world.  More work is needed to look at its application as a diagnostic and screening tool, but these early results suggest the DARC technique has potential as a reliable indicator of glaucoma and age-related macular degeneration.