Ayurveda is an indigenous medical system of natural healing, with roots in folk medicine, in practice on the Indian subcontinent since at least 5000 years. It adopts a holistic approach towards health, emphasizing the connection between the body, mind and spirit.  Ayurvedic and Sidha medicines are natural remedies derived from medicinal plants and minerals. Metallic–herbal preparations, called bhasmas, were and still are, widely used for the treatment of many diseases. 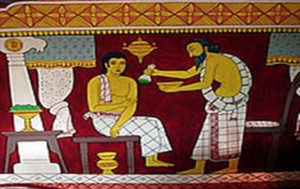 The metal/mineral preparations are treated mostly in Sidha medicine with herbal juices or decoction of plants and incinerated as described in the ancient texts. One of the most important bhasmas, Swarna bhasma, also called gold ash or thanga paspam, has been used for its therapeutic benefits in many chronic ailments such as, for example, rheumatoid arthritis, diabetes mellitus, etc. The gold ash is prepared by subjecting metals or minerals to the three procedures caled Shodhana, Bhavana and Marana. Gold ribbons are subjected to Shodana (purification). They are heated red hot and quenched for specific times in a specific liquid medium. Pellets are prepared and taken into earthen crucibles faced together, and the junction is sealed by mud smeared clothes. This apparatus is subjected for repeated heating cycles in traditional Puta or electric muffle furnace. Burning is continued for a specific time and then cooled down and the incinerated powder is collected.

The composition and physical characteristics of Swarna Bhasma have been studied before but its mechanism of action that is, the impact on human cells has not been investigated and remains yet poorly understood. Because our special interest in the suitability of gold nanoparticles for cancer diagnosis and treatment, we explored the way Swarna Bhasma, the ancient Ayurvedic medicine, interacts with cells, in comparison with chemically synthesized Au nanoparticles. In this work, we used several visualisation techniques to see how the incinerated gold particles interact with HeLa (human cells derived from cervical cancer). Would they be able to enter the cell and, if yes, would they harm it in any way? The study of the localization of particles and their interaction with human cells is useful to gain insight into the Indian gold’s therapeutic properties. We compared the behavior of gold ash with that of gold nanoparticles chemically synthesized in the lab. Figure 2 shows a large (2-3 µ) particle and several smaller ones inside the cell. 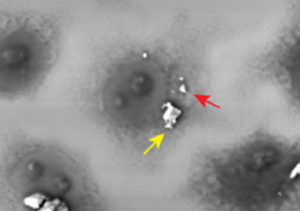 We were surprized to find that, in spite of the relatively large size of the incinerated gold particles, they are able to enter the cells and accumulate in vesicles and cytosol. Under some conditions, they were even able to reach the nucleus where DNA is stored. We found that their nuclear accumulation likely occurred after nuclear envelope breakdown during cell division. This is an extremely important finding, as the ability to penetrate the nucleus show their potential to be used as drug delivery vehicles, that is, to carry therapeutic molecules directly where it matters, improving the chemotherapy of certain drugs and even potentiate the cytotoxicity of anti-cancer drugs. More importantly, our study showed that the Swarna Bhasma gold particles don’t show any noticeable effect on the cell activity, confirming that they could be used for a wide range of therapeutic applications.