Aggressive lymphomas constitute a heterogeneous group of malignancies characterized by a fast growth and dissemination that exhibit a high sensitivity to chemotherapy , radiotherapy and immunotherapy , and show high cure rates with modern therapies . A dismal event in the natural history of these lymphomas is represented by the involvement of the central nervous system (CNS) (i.e., the brain, meninges, cranial nerves, and/or eyes). A rapid and devastating infiltration of important and delicate structures of the CNS results in a progressive neurological deterioration and impairment of general conditions, which is an important limitation for an early diagnosis and effective treatment. Overall, CNS dissemination (called also “secondary CNS lymphoma – SCNSL) is an uncommon, early, fatal, and preventable event. It affects the 5% of patients with diffuse large B-cell lymphoma, the most common form of aggressive lymphoma in Western countries. More than 90% of these events occurs during the first year since lymphoma diagnosis and affected patients have a poor prognosis; only one quarter of affected patients is alive at one year, with a median overall survival of 3 months. 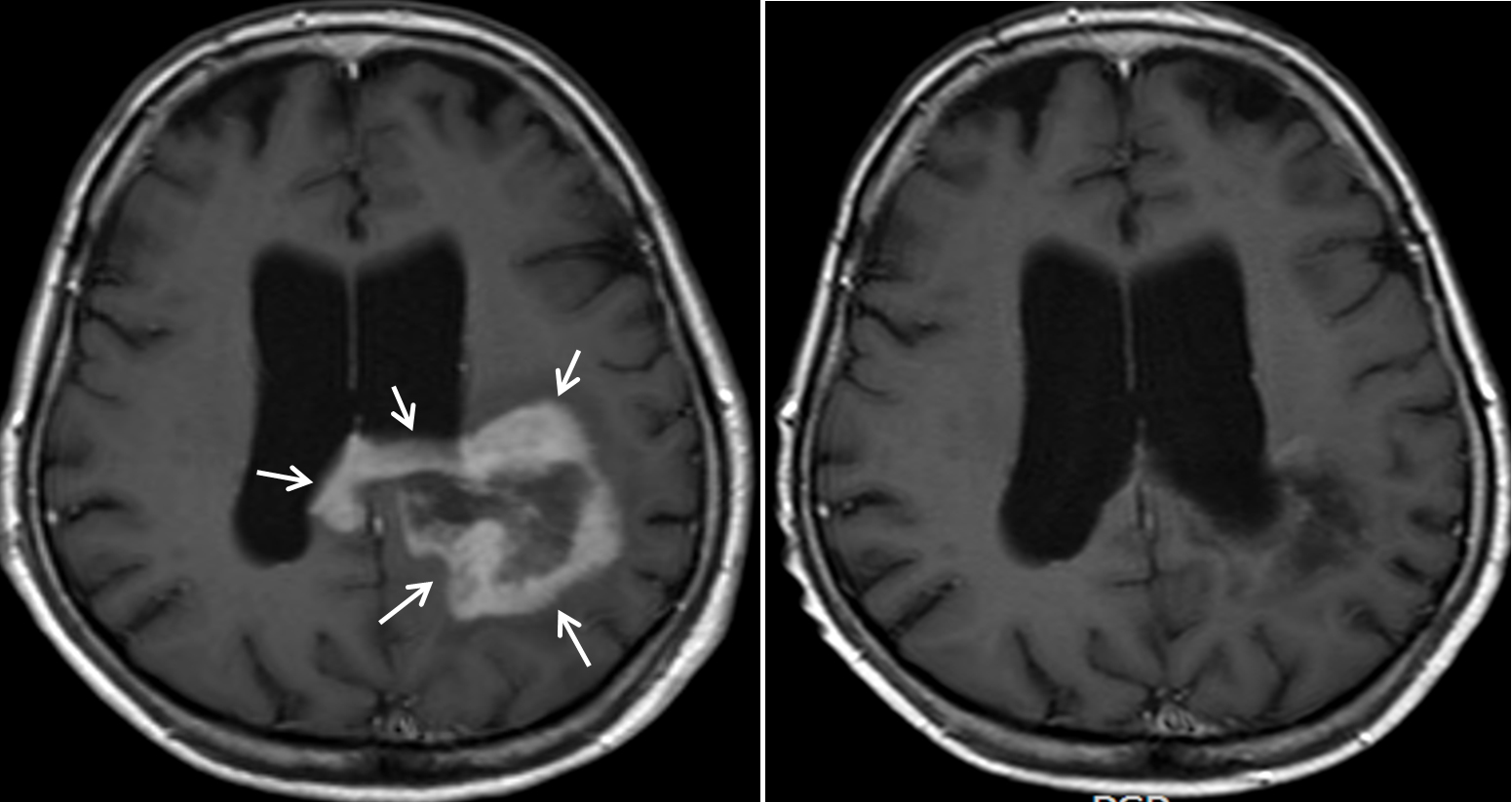 An example of a patient with brain parenchyma involvement of aggressive lymphoma (arrows in left photo) who achieved a complete remission after induction chemoimmunotherapy (right photo).

For several years, these survival figures remained unchanged because of the paucity of prospective trials addressing new therapeutic approaches; only three prospective, single-arm, phase II trials focused on this orphan tumor have been reported. The execution of prospective trials in the field of SCNSL is limited by the rarity of this disorder and by the patients’ poor general conditions, which remarkably reduces patient registration in available trials. Reported trials exploited three important principles: 1) the dose intensity, that is the administration of high doses of anticancer drugs in a short period to overcome tumor resistance; 2) the use of drugs able to cross the blood-brain barrier, a physiological barrier that safeguards neurological tissues from circulating toxic substances, and coincidentally protects tumor cells from anti-cancer drugs; and 3) the use of combinations of drugs aimed to avoid the risk of concomitant or consecutive dissemination to organs outside the CNS. In one of the reported trials, the so-called “SCNSL1 trial”, we have investigated a new therapeutic strategy for SCNSL based on two encouraging experiences. The first one regards the improved outcome obtained with the use of high doses of two antimetabolites called methotrexate and cytarabine in patients with “primary CNS lymphoma”, a disorder with similar characteristics than SCNSL. The second one regards the efficacious use of high-dose sequential (HDS) chemoimmunotherapy, including other drugs active against lymphomas called cyclophosphamide, cytarabine, etoposide, con consolidated with autologous stem cell transplantation (ASCT) in patients with relapsed aggressive lymphoma. Thirty-eight HIV-negative patients with aggressive B-cell lymphoma and secondary CNS involvement at diagnosis or relapse, age 18-70 years, and ECOG performance status ≤3 were enrolled, and treated with high doses of methotrexate and cytarabine, followed by HDS consolidated by a BCNU/Thiotepa-conditioned ASCT. Treatment included eight doses of rituximab, an anti-CD20 monoclonal antibody currently sued to treat B-cell lymphomas, and four doses of intrathecal liposomal cytarabine delivered by lumbar puncture.

Twenty-four patients achieved a complete tumor regression at the end of the therapeutic program, with a complete remission rate of 63%. Autologous stem cell were successfully collected from peripheral blood in 24 (89%) of 27 assessable patients, and 20 patients underwent ASCT. Toxicity was manageable, with rare cases of infections, and exceptional cases of severe non-hematological toxicity; four patients died because of toxicity. Half of the treated patients and two thirds of patients who received ASCT in complete tumor remission are alive at 5 years, which is a relevant therapeutic progress compared with previous studies. Moreover, the results of this trial advance the field beyond previous studies, demonstrating that subgroups of patients older than 65 years, with poor performance status or with concomitant extra-CNS recurrence have the same survival probability as younger and fit patients and patients with isolated CNS relapse. Accordingly, we propose high-dose-antimetabolite-based chemoimmunotherapy followed by HDS/ASCT as a new standard therapeutic option for patients with aggressive lymphomas and CNS dissemination.