Dementia with Lewy bodies (DLB) and Parkinson’s disease-dementia (PDD) are two closely related major neurocognitive disorders with Lewy bodies of unknown etiology. Both disorders show notable overlap in their clinical presentation, pathological features, biochemistry, and genetic risk factors. Despite considerable clinical similarities, according to international consensus, their diagnosis is based on an arbitrary distinction between the time of onset of motor and cognitive symptoms: dementia preceding parkinsonism in DLB, while it develops after onset of parkinsonism in PDD (the one-year rule). However, despite validitated criteria for DLB and PDD, in almost 50% of the cases, the clinical diagnosis is incorrect, whereas the specificity was below 60%. Clinically, both syndromes show cognitive impairment with severe deficits in executive function, visuo-spatial processing, visual hallucinations, fluctuating attention, REM sleep behaviour diorder (RBD) and parkinsonism, memory disorders being more severe in PDD.

The rate of cognitive decline is faster in DLB than in PDD and AD. Duration of disease is shorter in DLB and AD (mean survival 5-8 years) than in PDD (mean 13 years) (Tab. 1). Both disorders are characterized morphologically by widespread cortical and subcortical α-synuclein/Lewy bodies  (Fig. 1a) plus Alzheimer-related β-amyloid and tau pathology (senile plaques and neurofibrillary tangles, Fig. 1b). Intravitam PET and post-mortem studies revealed more pronounced cortical atrophy, elevated cortical and limbic Lewy pathologies (with APOE ε4), apart from higher prevalence of Alzheimer pathology in DLB than PDD. These changes may account for earlier onset and greater severity of cognitive defects in DLB. These changes are associated with multiple neurotransmitter deficits indicating that cognitive impairment in Lewy body disease is multifactorial. DLB and PDD sharing genetic, neurochemical, and morphologic factors are likely to represent two closely related subtypes of an α-synuclein-associated disease spectrum (Lewy body diseases), beginning with incidental Lewy body disease—PD-nondemented—PDD—DLB (no parkinsonism)—DLB with Alzheimer’s disease (DLB-AD) at the most severe end (Fig. 1c). However, DLB does not begin with PD/PDD and does not always progress to DLB-AD, while others consider them as the same disease. Both DLB and PDD show heterogeneous pathology and neurochemistry, suggesting that they share important common underlying molecular pathogenesis between synucleinopathies and tauopathies (AD). Cognitive impairment is not only induced by α-synuclein-caused neurodegeneration but by multiple regional pathological scores. Recent animal models and human post-mortem studies have provided important insights into the pathophysiology of DLB/PDD showing some differences, e.g., different spreading patterns of α-synuclein pathology, but the basic pathogenic mechanisms leading to the heterogeneity between both disorders deserve further elucidation. The sex ratio in DLB is balanced between AD and PDD and, thus, also suggests that DLB is a distinct disease with characteristics intermediate between AD and PD, while recent MRI findings indicate that DLB is more similar to AD than to PDD. In view of the controversies about the nosology and pathogenesis of both syndromes, there remains a pressing need to differentiate them more clearly and to understand the processes leading these synucleinopathies to cause one disorder or the other. 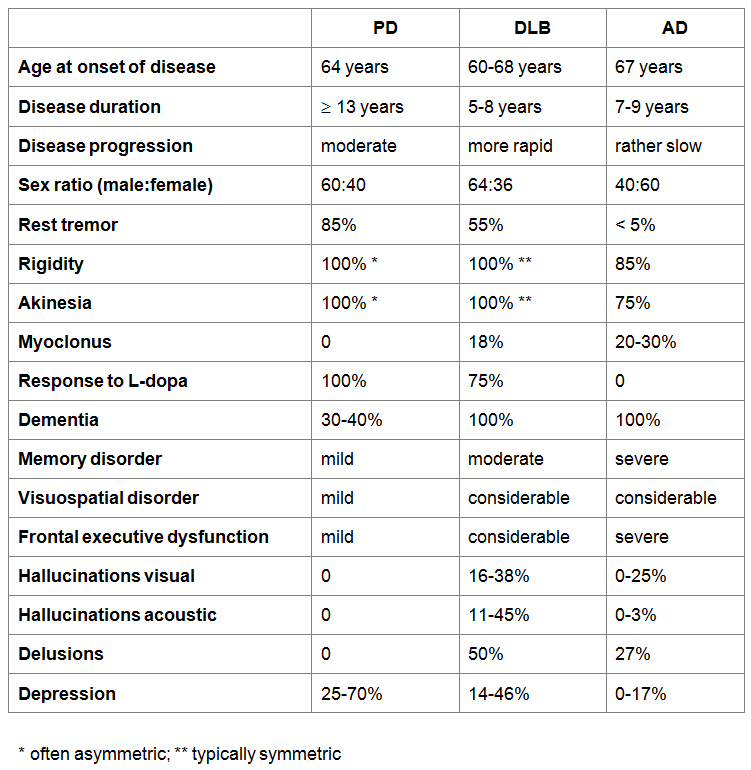 Clinical management of both disorders includes cholinesterase inhibitors, other pharmacologic and nonpharmacologic strategies, but these have only a mild symptomatic effect. Currently, no disease-modifying therapies of Lewy body dementias are available. Clinical management of both DLB and PDD include cholinesterase inhibitors to treat cognitive and psychotic symptoms and levodopa that produces less motor response in DLB than in PDD. The use of antipsychotics should be avoided due to serious adverse reactions in DLB. Preliminary results of antiα-synuclein-immunotherapy may open the way to potential new treatments.