Remember the unpleasant smell of boiled egg? It’s a Hydrogen Sulphide(H2S) an infamous flammable gas known for its smell and toxic effects.The exposure to H2S causes loss of sense of smell (Olfactory Paralysis) while the prolong exposure can cause unconsciousness and even death in some cases.However it’s not all that bad, it is present in our body.Surprised! The recent studies have shown that the mammals including humans produces H2S in controlled manner and useit as signalling molecule in various biological processes.While in diseased state like in case of Cancer, Alzheimer’s disease, Diabetes these H2S level are found to be disturbed. Thus it is believe that if we can find the exact role of H2S in body and can correlate H2S levels in body to diseased state we will not only be able to diagnosethese lethaldiseases in early stage but also can developcure/treatment forthese diseases.

Unfortunately, the detection of H2S is no very easy as it is highly volatile and reactive most of the time during sample preparation and measurement it gets converted to other form leading to false results. In this regard fluorescence based techniques have been sought after on account of advantages including easy sample preparation, fast detection, particularlypossibility to study in living system (in-vivo studies).

Metal-Organic Frameworks are inorganic organic hybrid porous materials made of Organic ligands and central metal ions connected at regular intervals. Among the artificialsystems designed for sensing H2S, metal-organic frameworks (MOFs) based probes offer distinct advantages of liberty in modulating electronic properties, exhibiting molecular sieving effect and the possibility of pre-concentration improves the extent of host-guest interactions. We thought to employ a nitro (-NO2) functionalized porous MOF (UiO-66@NO2, probe 1-NO2) for investigating its potency as a fluorescent probe, with the prior knowledge of nitro group reduction to amine by H2S. The differential electronic features of the two functional groups can be directly reflected in the photoluminescence profiles of the probe and can therefore act as a quantitative H2S sensor. Similar behaviour was observed for azide (-N3) functionalized MOF in presence of H2S. 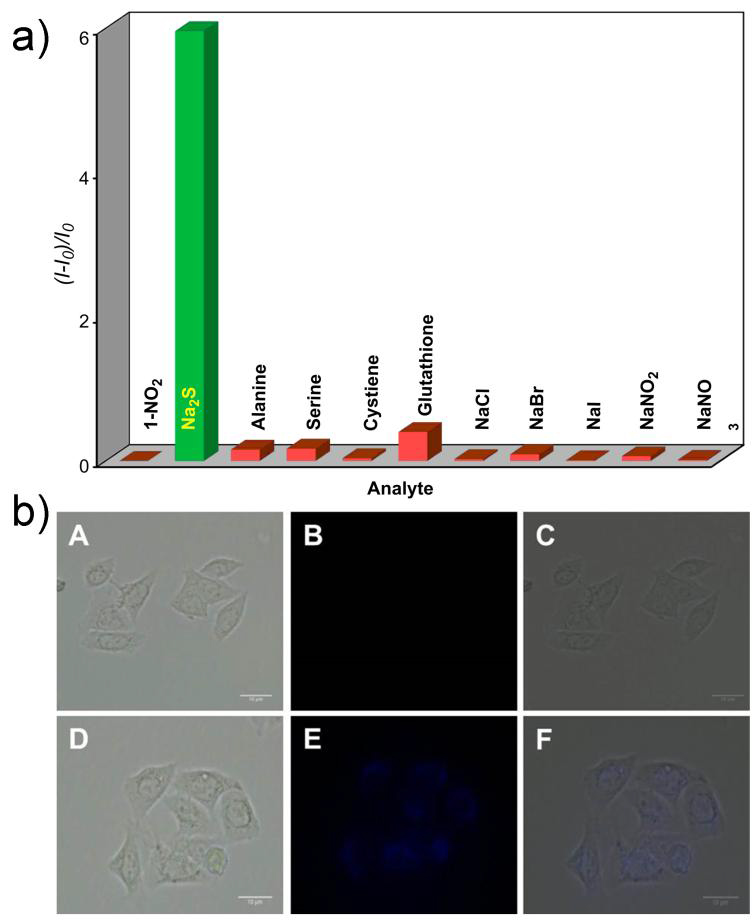 To examine the sensing ability of 1-NO2, we dispersed the compound in mimicking biological fluid system (HEPES buffer, 10 mM, pH 7.4)and recorded its fluorescence spectrum.Poor fluorescence response (Off state) was observed. Addition of Na2S,(source of H2S) to above dispersion resulted in a noticeable rise in the fluorescence intensity or turn-on response(On state).The response was very fast and observed in seconds. However in real biological system millions of different bio-molecules are present thus for a biologically relevant probe, absence of off-target response is very crucial. Especially,the response of the probe in presence of thiol-containing amino acids like glutathione (GSH) and cysteine (Cys) and also commonly reducing anions such as Br–, I–, NO2–, NO3– and Cl– were known to interfere the detection. No remarkable change in the fluorescence intensity was observed and the reactivity of H2S with -NO2 was not found to be affected in the concurrent presence of these interfering species. Additionally the detection limit of the probe was found to be 188 mM which is in the range of concentration of H2S found in biological systems. The preliminary study on the probe showed that it is biocompatible and can detect H2S in HELLA cells.

In conclusion, we have designed and synthesize nitro functionalized MOF based selective and sensitive detection of H2S in biological system.The MOF-based turn-on sensors for H2S are still in the early stages of development, and there is further scope for the improvement of the performance of the material.