One of the most important models for studying amyloid fibril formation is the Aβ peptide, aggregates of which form plaques in the course of Alzheimer`s disease. Formation of Aβ aggregates goes through the nucleation mechanism with exponential acceleration of aggregation after seeds are formed. Though about 22000 papers (from the PubMed database) devoted to studying amyloid formation of Aβ peptide have been published, there is no consensus on the details of the scheme of aggregates formation. Previously we analyzed several models describing scenarios of amyloid fibril formation and gave equations, which connect experimentally measurable characteristic times with nuclei sizes and scenarios. As a direct consequence of equations, a scheme for analysis of amyloid kinetics was proposed. In this paper we have tried to apply such analysis and compared the obtained results to the electron microscopy (EM) images. 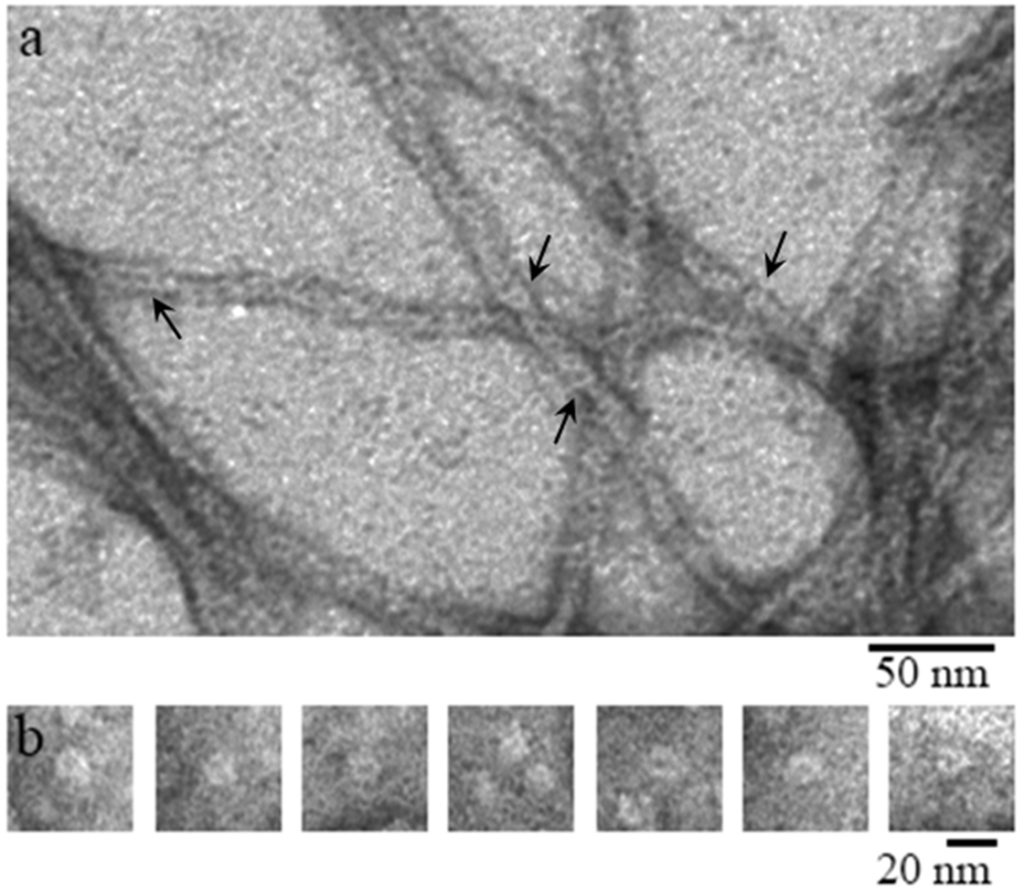 Formation of fibrils was traced by ThT fluorescence. Almost all kinetics had a lag-phase comparable to the aggregation time, and the analysis has shown the nucleus size to be around one monomer. This is a tricky situation since the nucleus size of one monomer may refer to several scenarios. One of the possible scenarios is the formation of some non-amyloid aggregates inside of which some rearrangements occur and seeds (the minimum size of stable state) are formed afterwards. It should be noted that according to the model, such “monomeric” seeds are building blocks for amyloid aggregates too. We obtained the EM images which support this scenario – thus, before formation of amyloid-like aggregates amorphous aggregates are present and then, after some time, ring-shaped oligomers are formed along with amyloid fibrils (Fig. 1). The aggregation process finishes when all non-fibril aggregates disappear. It is notable that though our data on the nucleus size do not coincide with our earlier estimations this could be addressed to the complex process of amyloid formation with high polymorphism of Aβ amyloid aggregates.

How to determine the size of folding nuclei of protofibrils from the concentration dependence of the rate and lag-time of aggregation. I. Modeling the amyloid protofibril formation.
Dovidchenko NV, Finkelstein AV, Galzitskaya OV
J Phys Chem B. 2014 Feb 6