Developmental metaplasticity in cortical codes of firing and structure

Cortical plasticity, underlying the brain’s ability to change, has been largely viewed in two separate contexts: early development, governed largely by genetics, and later adaptation, governed largely by experience. Age-related cortical degradation is yet another aspect of plasticity, or its demise. Cortical plasticity has physical, chemical and biological expressions. While learning and memory have been widely associated with synaptic plasticity, fundamental changes in cortical modes of firing are perhaps the most highly visible expressions of cortical plasticity.  Empirically observed trains of cortical firing impulses and physical modeling of neuronal firing have inspired the firing-rate paradigm of neural information transfer. 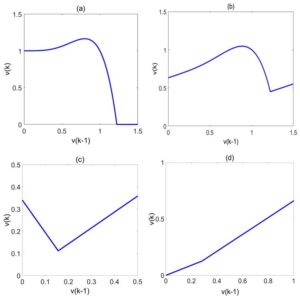 Combining the firing rate and the synaptic plasticity paradigms, we have derived the elementary codes of global attractors, representing the stable modes of cortical firing-rate dynamics, for different developmental stages: pre-critical, critical and maturity. Neuronal silencing, often regarded as a developmental process, controls cortical circuit connectivity throughout life. We find that certain behavioral attributes, previously associated with developmental stages in experimental studies, are segregated by the time constants of the underlying model. We hypothesize that these time constants generally increase with age.

The ability of discrete iteration maps, having the form v(k)=f(v(k-1)), to describe particularly intricate dynamics in low dimensional models with graphical clarity has made them highly popular in mathematical circles for the past half century.

Figure 1 shows the discrete iteration maps of firing rate in a uniformly parametrized 2-neuron circuit corresponding to different developmental stages, specifically, (a) pre-critical period, (b) critical period and (c) maturity period. The units, corresponding to membrane potential, are scalable with those of firing rate (the firing rate to membrane potential ratio has been coarsely determined by experiment as ), and, as in the underlying mathematical model, are omitted. The behavior of the underlying model is governed by the time constants corresponding to neuronal membrane and synapse dynamics. Characteristic changes in the map, appearing as the time constants are increased, are assumed to be associated with the transition from one developmental stage to another. 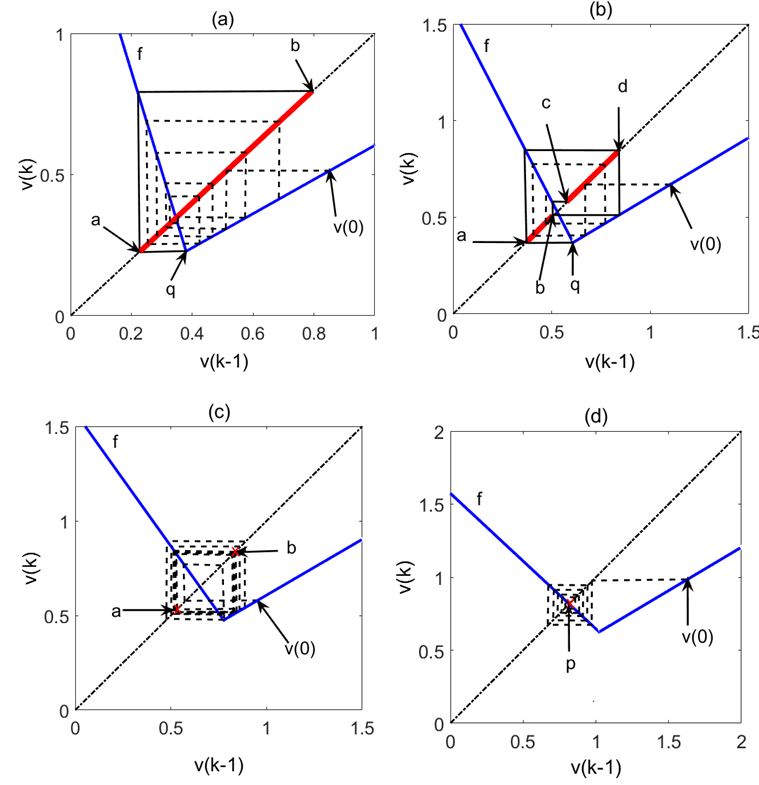 Noting that uniformly parametrized neural circuits of any size, segregated by neuron silencing, facilitate scalar analysis, we employ cobweb diagrams in the illustration and analysis of firing dynamics in such circuits. A cobweb diagram is initiated at some initial firing rate, v(0), on the map, connected horizontally to the diagonal v(k)=v(k-1), then connected vertically to the map, and so on. Figure 2 shows cobweb diagrams for fully-connected circuits of (a) ten, (b) five, (c) two, and (d) one neurons, uniformly-parametrized in accordance with membrane and synapse time constants corresponding to the maturity stage. A dash-dotted  black line represents the diagonal v(k)=v(k-1),  dashed black line segments represent cobweb trajectories initiated at v(0), red line segments and symbols represent global attractors of the firing rate dynamics corresponding to each of the maps, and solid black line segments represent the cobweb trajectory initiated at the bend-point q, defining end points of global attractors on the diagonal v(k)=v(k-1). As we have shown analytically and is illustrated visually in the figure, the map (a) represents a chaotic attractor (sequential values of v(k) obtained from the cobweb trajectory initiated at v(0) are not ordered in size), the map (b) represents a largely-oscillatory sequence (sequential values of v(k) alternate between the two line segments [a b] and [c d]), the map (c) represents an oscillatory attractor (sequential values of v(k) alternate between the two points a and b), and the map (d) represents a fixed-point  attractor (sequential values of v(k) converge to the point p).

Finally, we note that while our findings have been mathematically derived, each of the resulting neural behaviors has been observed in neurobiological experiments and associated with cortical functions, as cited in our publication.