Traditionally, gerontological research is focused on later stages of life cycle. Accumulating evidence, however, suggests that the rate of aging-associated functional decline (senescence) as well as the risk for chronic pathological conditions can originate early in life. Epigenetic (dys)regulation is believed to play a central role in these processes. Errors in the maintenance of the proper epigenetic state (heritable changes in gene expression that do not involve alteration to the underlying DNA sequence) lead to the increase in epigenetic variability over the individual’s lifespan (‘epigenetic drift’), which is an important hallmark of aging. There is, however, consistent evidence that most epigenetic modifications are non-random, and epigenome may respond to environmental stimuli in an adaptive manner to maintain a proper functional capability. 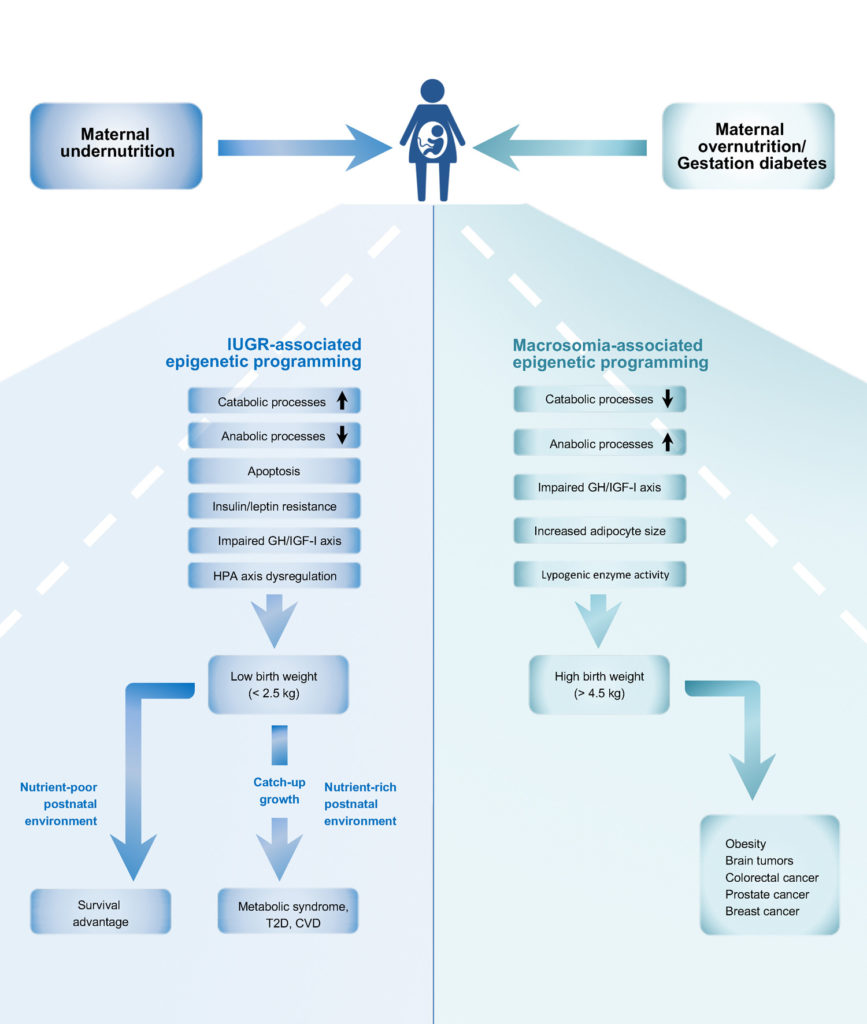 For instance, under conditions of the malnutrition-triggered intrauterine growth restriction (IUGR), compensatory epigenetic alterations may be induced in energy and adipogenic metabolism gene networks. Such adaptive plasticity may give short-term postnatal benefits but result in an increased risk of developing cardio-metabolic disorders in later life. Many lines of evidence suggest that rate and direction of age-related epigenetic drift could be ‘programmed’ by environmental factors in early development, leading thereby to life-course phenotypic effects that can be particularly relevant to aging. Several recent studies, in particular, demonstrate that epigenetic clock (a set of age-sensitive DNA methylation patterns that together strongly predict chronological age) can be developmentally tuned, and the ticking rate of epigenetic clock and subsequent divergence between epigenetic age and chronological age can be programmed in early life. The processes potentially contributed to developmental programming of aging trajectory also include early-life immune maturation, developmental establishment of a stable gut microbiota and life-course dynamics of telomere attrition, as well as programming of hormonal axes such as the growth hormone/insulin-like growth factor-1(GH/IGF-1) axis assumed to be one of the most important physiological processes in determining aging trajectory and longevity.

Available epidemiological evidence suggests that life-course dynamics of the IGF-1 level might likely play a substantial role in associations between prenatal conditions, birth weight and health outcomes in adult life. Indeed, subjects born small for gestational age (birth weight less than 2500 g) are commonly characterized, on the one hand, by low IGF-1 levels which may persist into adulthood, and, on the other hand, by higher risk of insulin resistance and type 2 diabetes (T2D) in adult life. Thus, it may be suggested that long-lasting outcomes of IUGR including lowered IGF-1 levels and low birth weight followed by catch-up growth could be a general causal pathway relating poor growth early in life with adverse adult health outcomes, such as hypertension, insulin resistance, T2D and cardiovascular disease. Fetal macrosomia (commonly defined as a birth weight higher than 4000 g), on the contrary, may be associated with increased life-course IGF-1 levels and, as a consequence, with an increased risk of non-diabetic obesity and cancer in adult life. In conclusion, it may be hypothesized that different aging trajectories can be realized depending on developmentally programmed life-course dynamics of IGF-1. In this hypothetical scenario, IUGR-induced deficit of IGF-1 causes “diabetic” aging trajectory associated with various metabolic disorders in adulthood, while fetal macrosomia-induced excessive levels of IGF-1 lead to “cancerous” aging trajectory (see figure reproduced from original source with permission from Elsevier). If the above reasoning is correct, then both low and high birth weights are predictors of short life expectancy, while the normal birth weight is a predictor of “normal” aging and maximum longevity. Given these considerations, using the specific epigenome-targeted nutritional and/or pharmacological interventions aimed at correction of developmentally-induced epigenetic disturbances would probably provide new opportunities to prevent and treat chronic disorders and to human healthspan extension.