Different perfusion patterns in a patient with acute ischemic stroke

The main goal of the current acute therapies for acute ischemic stroke is to restore perfusion in brain areas supplied by an occluded artery. The use of endovenous thrombolytic drugs and more recently of mechanical thrombectomy by means of intra-arterial devices have largely improved the functional outcome of patients with acute stroke. However, reperfusion of ischemic areas of the brain may be useful or even harmful when it occurs too late. On the other hand, areas of reversible ischemia called “penumbra” can benefit from reperfusion also in late time windows in the presence of efficient blood supply compensation provided by collateral circulation. Thus, brain perfusion imaging techniques have been developed to improve the selection of patients eligible for reperfusion therapies, distinguishing areas of penumbra from non viable tissue. Computed tomography perfusion (CTP) is the most available perfusion technique and is also able to identify lacunar infarcts as hypoperfused areas, otherwise not directly visible in non-enhanced CT, and other conditions that may mimic stroke symptoms as seizures, that may show focal hyperperfusion due to hypermetabolism. 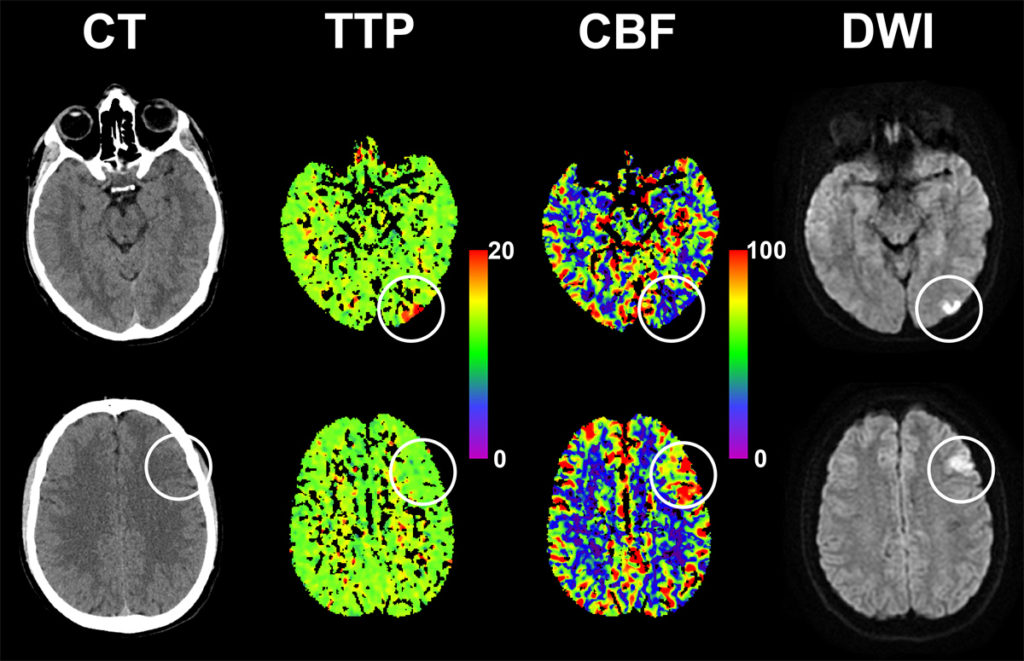 Fig. 1. Non-enhanced computed tomography (CT), CT perfusion, and follow-up diffusion-weighted imaging (DWI) studies. The first row shows a hypoperfused lesion with delay in the time-to-peak (TTP) map and a reduced cerebral blood flow (CBF) area. The second row shows a hyperperfused lesion characterized by a normal TTP map and a hyperperfused area in the CBF map. The non-enhanced CT shows early ischemic changes in this area. In both cases, an ischemic lesion was found in the follow-up DWI.

We present a case of young patient who presented with aphasia and weakness of the right arm and was attended by the emergency stroke team at 4 hours after symptom onset. Multimodal CT assessment in our center included a non-enhanced CT scan that showed areas of low attenuations in part of the left frontal lobe, a CT angiography that ruled out large vessel occlusions and a CTP study. This showed a typical image of hypoperfusion in the left occipital lobe and a hyperperfused area in the left frontal lobe. The patient did not receive any acute reperfusion therapy and he progressively recovered after neuroimaging acquisition. Finally, two ischemic lesions matching with CTP abnormalities were identified at the follow-up MRI.

This case demonstrates that different cortical ischemic areas may coexist showing as different CTP patterns, and also that hyperperfused areas are suggestive of established ischemic lesions. Hyperperfusion is not a frequent finding on CTP and is often considered as suggestive of stroke mimics. However, areas of hyperperfusion on CTP do not rule out ischemic stroke since reperfusion may spontaneously occur in ischemic areas after spontaneous recanalization or due to other mechanisms such as collateral blood flow, extreme vasodilatation and blood brain barrier leakage. In these conditions the ischemic parenchyma is more vulnerable and reperfusion may increase inflammatory responses and the risk of cerebral hemorrhages, especially if thrombolytic agents are used.

In conclusion, hyperperfused areas on CTP may indicate ischemic lesions rather than stroke mimics, but it is unknown if these areas may benefit or not from thrombolytic therapies.