Swallowing the pill we don’t know whether it comes to the target, destroys the harmful objects (microbes, viruses, cancer cells) and/or whether it works correctly at the center of the inflammation. Let’s imagine that each grain of a drug will have a special sensor that will report: “I’m on the spot.. target is destroyed.. mission accomplished”. Possible it ever will, but long before the in vivo (in the living organism) tests, such drugs should be designed in vitro (in the cell culture). 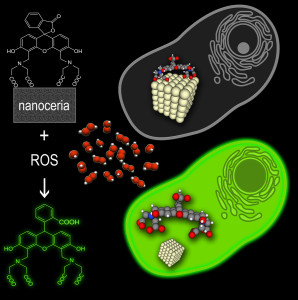 It’s known that cerium oxide in the nanoparticulate form (so-called as nanoceria) is perspective medicine for therapy of dysfunctions caused by oxidative stress. Biomedical applications of nanoceria are promising because of two main reasons: its redox activity and relatively low toxicity. The first factor measures the ability of the nanoceria to participate in the redox processes in living cells, particularly in the scavenging of reactive oxygen species (ROS). The second factor provides that the in vivo application of nanoceria is relatively safe.

One of the most important ROS in the living cell is the hydrogen peroxide (H2O2); it is continuously formed in the processes of aerobic respiration and decomposed into non-toxic constituents (water and oxygen) in the main by the enzymes. When enzymes fail (in the case of some diseases, viral infections, unfavorable conditions, ageing and so forth) the oxidative stress occurs. Here is where the drug of nanoceria is needed, but how do we know when it works if neutralizes ROS?  To determine whether the interaction took place, we have attached to the particle’s surface a very small sensor – an organic molecule (Fig.1.).

Calcein is well-known organic luminescent dye, bright and non-toxic. This molecule was discovered an interesting property: when it is combined with nanoceria and dye is fixed on the surface of nanoparticle, the luminescence is quenched. In turn, nanoceria like a sponge very eagerly absorbs the peroxides, which throw other ligands (and the calcein too) away the surface of nanoparticle. Simple injection of hydrogen peroxide into the solution of non-luminescence nanoceria-calcein complex leads to dye releasing and restoration of its luminescence. Stability of the nanoceria-calcein bond practically does not depend on a cerium oxidation state and foreign ions in system; the complex is blasted at chemisorptions of Н2О2 only. 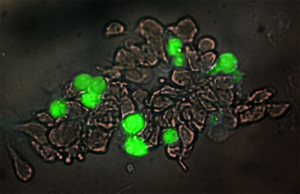 Fig. 2. Viruses cause inflammation and oxidative stress in the ST-cells during breakdown. When nanoceria fights viruses and scavenges ROS, calcein shines brightly in the infected cells only.

Hydrophilic high-ionic molecule of calcein can’t penetrate cell’s membrane and can’t both stain cell as pure dye and leave cytoplasm of cell when collected in it. Non-fluorescent complex nanoceria-calcein is more hydrophobic (less ionic) than pure calcein and fast permeates intact live cells (during 3-5 min). Nanoceria-calcein complex is less cytotoxic than pure nanoceria and can be stored in the cytoplasm till the oxidative stress will occur; then healing will begin and the luminescence will appear.

Thus, treatment of living cells with non-luminescent complex of nanoceria plus calcein will allow observing the process of harmful ROS inactivation in vitro (Fig. 1.). Obviously, both endogenous and exogenous ROS will cause activation of nanoceria-calcein complex and will be monitored in cells culture. For example, viral infections can also cause oxidative stress, playing the key role in damaging both infected cells and surrounding tissues. A good example of such infection is vesicular stomatitis virus (VSV), which causes an acute viral disease of a wide range of mammals, including equine, cattle and swine. So, the epithelial swine testicular cell line (ST-cells) is highly sensitive to VSV. Our research indicates that nanoceria-calcein complex not only increases cells viability as effective drug, but also allows to track the VSV infection process in vitro (Fig. 2.). Obviously, the next step will be to see the localization of infection in the whole sick organism during the healing process in vivo.