Discovery of new genes in schizophrenia: the importance of rare diseases in psychiatry

Schizophrenia is a major psychiatric illness affecting one percent of the population worldwide. Patients suffering from schizophrenia present delusions, hallucinations, abnormal behavior, impairment in daily life and cognitive deficits. Current treatments are insufficient in addressing all of these symptoms. The heritability of schizophrenia is estimated at 80 percent, but the identification of genes associated with this illness has been challenging.

To identify new genetic variants of this disorder, we hypothesized that exploring an extreme and severe form would be helpful, and we chose to focus on childhood-onset schizophrenia, a rare disease with a prevalence of approximately 1 in 40,000. This form has similar symptoms as the adult form, but its onset occurs before the age of 13, and has a very poor outcome. 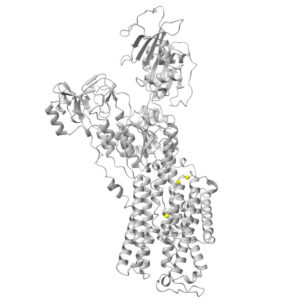 Fig. 1. 3D representation of the protein encoded by the ATP1A3 gene. Yellow markers indicate the mutations identified in childhood-onset schizophrenia cases in the study.

Our team in McGill University (Montreal Neurological Institute and Hospital – Montreal, Canada) has developed collaborations with psychiatrists from France (Department of Child and Adolescent Psychiatry in Rouen University Hospital and Pitié-Salpêtrière Hospital in Paris) and the United States (National Institutes of Health) to recruit and analyze genetic data from 19 patients with childhood-onset schizophrenia and their unaffected parents. We have found that three patients showed a mutation in the ATP1A3 gene (cf picture) while three others showed genetic variants in the FXYD genes, a gene family that contributes to the normal functions of ATP1A3. Mutations affecting ATP1A3 were previously reported in other rare neurological childhood diseases. Our findings provide evidence that this gene is also involved in psychiatric disorders. This work was published in the journal Molecular Psychiatry on June 12, 2018. It was funded by Genome Canada and Genome Quebec and supported by the Canadian Institutes for Health Research (CIHR) and the Healthy Brain for Healthy Lives – McGill University initiative.

The identification of genetic variants is the first step forward in efforts to treat childhood-onset schizophrenia. The immediate impact will be to enable diagnosis of patients and provide genetic information to the families. In the future, personalized therapies may follow and some drug interventions might become available for carriers of ATP1A3 mutations. Our identification of genes responsible for this terrible condition means researchers can focus on developing drug therapies to give patients better outcomes. It will also decrease the guilt the children’s parents often feel, because they think they somehow caused their child’s condition.

More generally, this finding highlights the importance of looking for rare diseases behind the diagnosis of a major psychiatric disorder, especially schizophrenia. The individually rare diseases are collectively common and more than 6,000 have already been identified, most of them being associated with a genetic factor. Rare diseases have attracted growing interests in the last decades but the awareness of their impact in psychiatry is more recent. There is no doubt now that rare genetic variants like microduplications or microdeletions (called CNVs for Copy Number Variants) are present in schizophrenia. The genetic testing Committee of the International Society of Psychiatric Genetics has stated that these type of variants “may have clinical implications for general medical care” and “that identification of pathogenic CNVs in adults with major mental illness may help patients and their families to better understand and accept the diagnosis within a medical context and could provide useful information about risk to relatives.” A multidisciplinary program entitled EnGagE (Enhancing Psychiatric Genetic Counselling, Testing, and Training in Europe) has been funded by the European Union (COST Action CA17130) to share knowledge et enhance the expertise about psychiatric genetics among psychiatrists, geneticists, scientists…

The identification of rare psychiatric diseases may help to redefine the frequent psychiatric disorders, as well as the ways to treat them using a more personalized approach.