Breast cancer (BC) is the most common cancer in females worldwide. Among all BC patients, more than 70% are diagnosed as estrogen receptor positive (ER+). Estrogen is the primary female hormone which is responsible for the development and regulation of female reproductive system. Estrogen is also able to stimulate the proliferation of breast cancer cells. The effect of estrogen is exerted by binding to the endogenous estrogen receptors. In ER+ BC patients, the breast cancer cells have an overexpression of ERs and depend on estrogen for their survival and growth. Thus, endocrine therapy which blocks the activation of estrogen and its binding to ER is an effective way to treat ER+ breast cancer. 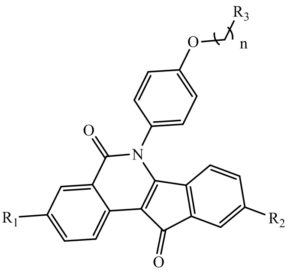 Fig. 1. The structure of compounds as
ER and VEGFR-2 dual inhibitors

Selective estrogen receptor modulators (SERMs) can block the effects of estrogen on BC cells by siting in the estrogen receptors to take the place of estrogen competitively. Tamoxifen is the first SERM and is currently widely used in the treatment and prevention of breast cancer with solid efficacy documented in several randomized-controlled clinical trials. Although SERMs have shown great benefits in treating ER+ BC, they still remain disadvantages. For example, long-term treatment of Tamoxifen increases the occurrence of endometrial cancer. And another common deficiency that limits the use of SERMs is intrinsic and acquired drug resistance, in which breast tumors become refractory to endocrine therapies and relapse. Raf-1/MAPK/ERK, an intracellular signaling pathway responsible for the proliferation of cancer cells, was recently found to be involved in the drug resistance of Tamoxifen for its excessive activation in Tamoxifen resistant BC cells.

Angiogenesis is an essential process that promotes cancer cell growth and distant metastasis in many cancers including breast cancer. Vascular endothelial growth factor receptor-2 (VEGFR-2) is the key effector in promoting angiogenesis and the inhibition of VEGFR-2 has proved to be an effective way for cancer therapy. Moreover, the Raf-1/MAPK/ERK pathway can be activated by VEGFR-2 and promote cell proliferation which indicates a crosstalk between VEGFR-2 and SERM resistance.

Multiple-ligand is a single chemical entity which acts at multiple biomolecular targets. It has been an attractive way to design multiple-ligands in the development of anti-cancer agents. Designed multiple-ligands may exert favorable advantages of improved efficacy and lower incidence of side effects.

In this study, we introduced the discovery and identification of a series of compounds as multiple-ligands of estrogen receptor and VEGFR-2(Figure). These compounds were not only able to block the action of estrogen on breast cancer cells but also able to inhibit VEGFR-2 activation and angiogenesis. This simultaneous action has exhibited promising anti-cancer effects. ER binding test suggested that most of our compounds can competitively bind the ligand-binding domain of estrogen receptors to displace estrogen, thereby hampering the activation of ER. Compounds were screened against two human breast cancer cell lines (MCF-7 and MDA-MB-231) in vitro and showed very promising activity profiles. They also exhibited good in vitro inhibitory activity against human endometrial cancer cells (Ishikawa) which indicated the avoidance of endometrial cancer. In the anti-angiogenic activity tests, some compounds displayed good in vitro inhibition on the activation of VEGFR-2 and the proliferation of human umbilical vein endothelial cells which form the blood vessel. Furthermore, the Raf-1/MAPK/ERK pathway was also found to be inhibited by the most active compound which showed a potential to overcome drug resistance. These results suggested a new and promising route in the discovery of drugs against breast cancer.