Our respiratory system is continuously exposed to potentially harmful particles such as dust, fungi, bacteria and viruses. Indeed, even before the COVID-19 pandemic, respiratory conditions were already one of the leading causes of death worldwide.

The first line of defense against these major environmental insults is a surprising little warrior – a whip like organelle found in all our cells – cilia. Motile cilia are microscopic hair-like organelles that can beat rapidly at ~1000 times per minute. What’s even more remarkable is millions of these cilia can work together to pump out debris and clear up our airways in no time. Remarkably, the coordinated activity of millions these microscopic cilia can transport pathogens out at fairly high speeds, over ~100 times their own length every minute. So next time you sneeze or blow your nose, think about these little warriors at work. 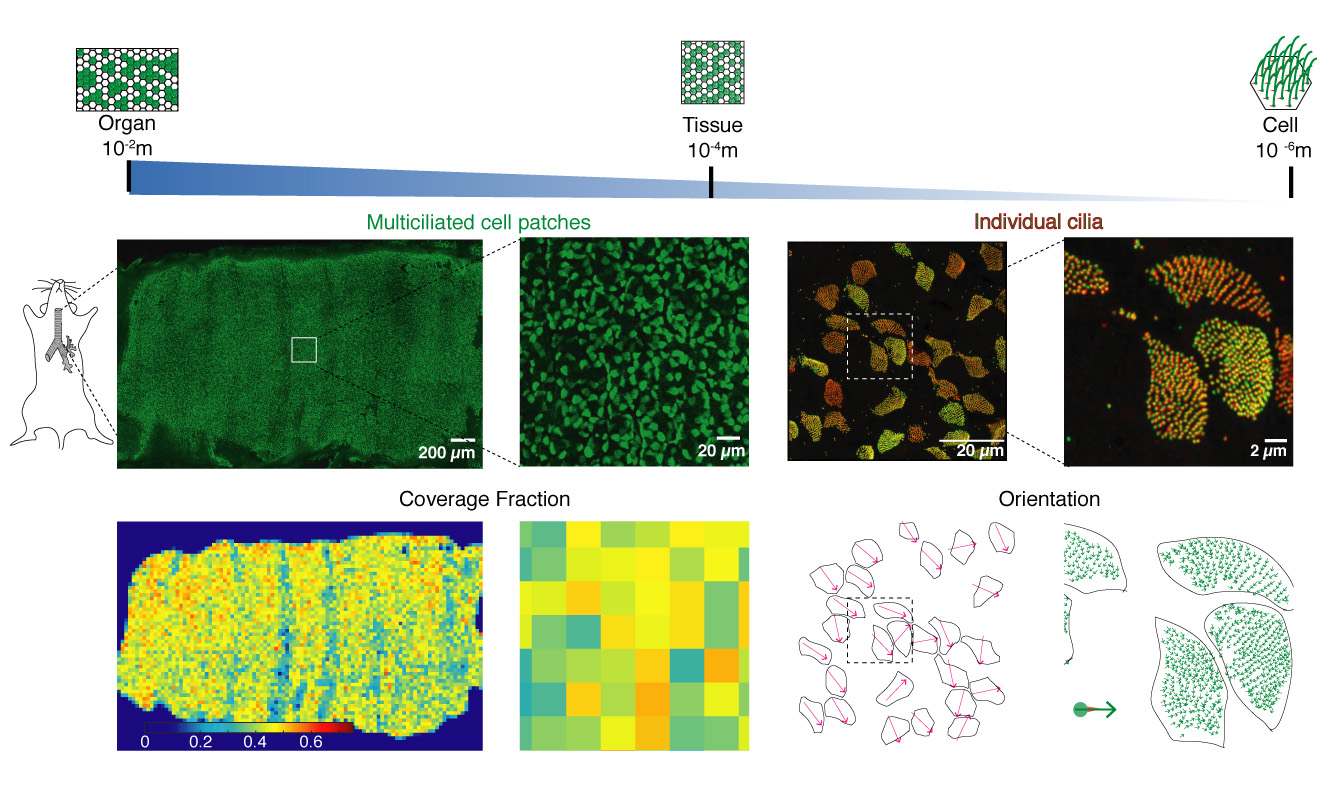 Yet, the airway faces a large organizational challenge. It contains millions of ciliated cells, each cell featuring hundreds of cilia on its surface. To transport mucus in one direction, these cells and cilia must somehow align with each other. Moreover, there are gaps between the ciliated cells, because many other cell types also live in the same tissue. Therefore, the tissue must be organized such that particles can be bridged from one active ciliated region to the next, across the entire respiratory tract.

Every healthy airway features such gaps between cilia, but in diseased tissues the gaps can be larger, or the ciliary array could be less aligned. Therefore, it is crucial to elucidate how the mutual organization of cilia and multiciliated cells influences their ability to generate directed flows.

To understand this fundamental tissue organization, the authors systematically mapped out the mouse trachea. Using fluorescence microscopy, they imaged the smallest and the largest features, from individual cilia to the whole tissue, and everything in between (Fig. 1).

Figure 1 shows that the multi-ciliated cells form a “patchwork” pattern. They form active clusters that alternate with cilia-free areas. The gap size can be very large, around 3 cell diameters. In fact, only ~40% of the tissue is covered with ciliated cells.

Intriguingly, cilia in different clusters are not oriented parallel to each other. There is variation in the orientation of their beating plane. These observations beg the question how fluid is transported across the cilia-free regions and, overall, how can this relatively disorganized pattern of multi ciliated cells produce an organized and directed flow.

To answer these questions, a computational model was developed to simulate the flows generated by “carpets” of multiciliated cells with diverse architectures. Since these carpets were sampled computationally, one can systematically vary the coverage fraction of ciliated cell clusters, the distance between them, and the relative orientation of cilia. These simulations also examine how efficient different carpet patterns are at clearing particles that are dropped into the flow they generate.

Fig. 2. Particle trajectories simulated for a range of fluctuations. Initially, the particles are distributed identically in all the panels. Over time, they are subject to flow and fluctuations with different strength. For small fluctuations the particles get trapped in recirculation zones, but strong fluctuations facilitate their escape and faster clearance.

This analysis led to a big surprise. It is not the tissues that are perfectly aligned that produce the fastest particle clearance. Instead, the carpets that have a moderate amount of disorder, such as those observed in healthy mouse trachea, are the most efficient at clearing particles. So, noise can be beneficial. The reason for this is that ciliated cell clusters form small “rivers” that transport particles, where a moderate amount of disorder helps with connecting the currents of these individual rivers, giving rise to a macroscopic directed flow (Fig. 2).

Beyond understanding airway physiology, this work also prescribes the design principles for different kinds of active carpets. This could open new doors to fabricate new active materials that drive fluid flows with programmable and adaptive functionalities. These could have diverse applications in engineering, including micro-filtration and self-cleaning surfaces.