Salt marshes are among the most productive ecosystems on Earth and are sometimes subjected to pollution. The vegetation in this type of environment is, as a consequence, highly specialized to endure its surroundings. For over four decades, industry waste containing heavy metals was discharged in Ria de Aveiro, a lagoon on the northwest of Portugal. Researchers found that Halimione portulacoides, a typical plant in this lagoon, and highly representative in European salt marshes, is able to accumulate these metals in its tissues: roots, stems and leaves.

Bacteria that live associated with plants, whether inside the plant (endophytic) or on the surface of the plant (epiphytic) or near the roots (rhizospheric), are known to be relevant for promoting the growth of plants. This is especially true in the presence of stresses for the plant, as is the case of presence of metals in the soil. These bacteria can improve the nutrient uptake for the plant, prevent prejudicial effects of pathogenic microorganisms, and aid in the detoxification of pollutants. 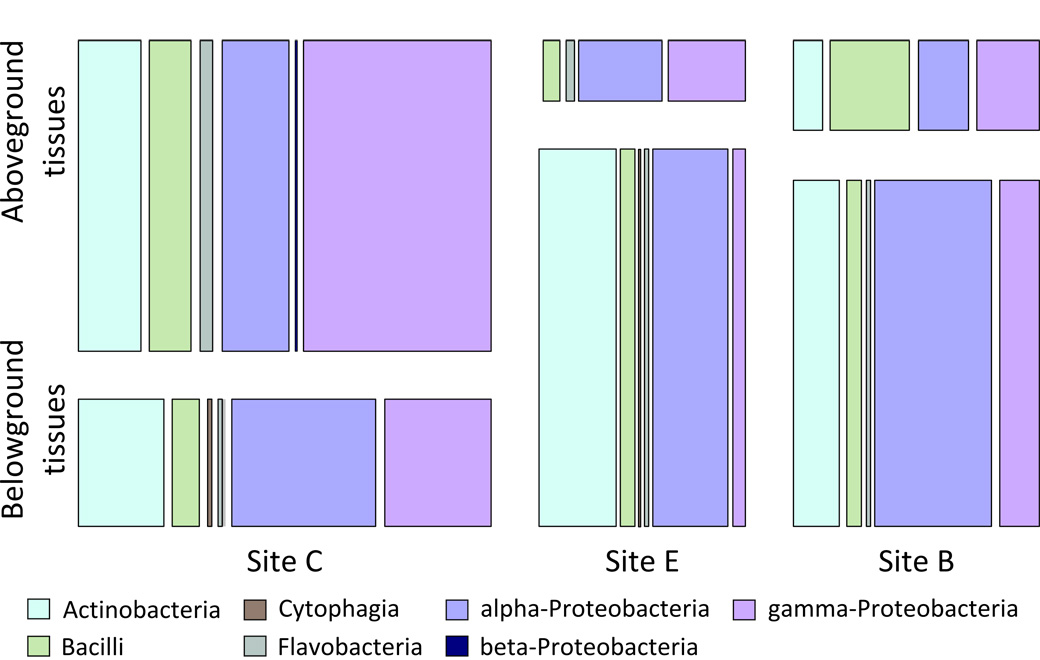 Fig. 1. Distribution of endophytic isolates by isolation sites (C, E and B) and plant tissues (aboveground – stems and leaves; and belowground – roots), and further, by taxonomic class.

We studied the endophytic bacteria of the plant Halimione portulacoides, collected from the polluted lagoon of Ria de Aveiro (sites B and E, most and intermediate contamination, respectively) and collected from non-polluted sites (site C). The objective was to understand the diversity of the bacteria, to characterize them and find traits that could help the plant to thrive in such environments.

We collected soil and healthy plants in the three sites. We used the soil and tissues of these plants to analyze the amount of metals in them, with roots separated from stems and leaves. In order to study only the bacteria living inside the plants, we sterilized their surface. The tissues were then mashed and put into Petri dishes so that bacteria could grow. We obtained 665 bacteria, analyzed their genetic information and concluded that 467 of these were unique strains. To understand how these bacteria promote the growth of the plant, we analyzed their ability to produce six different enzymes and specific traits related to plant growth promotion. 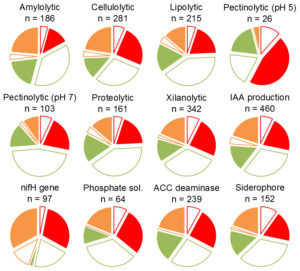 In our results, we confirmed that the soil and tissues of plants collected in polluted sites had, indeed, a higher amount of metals in them. Overall, the roots accumulated higher amounts of metals than the stems and leaves. A similar number of bacteria were obtained from polluted sites and non-polluted sites (Fig. 1). Upon analysis of the genetic information of the bacteria, we attributed a classification to these bacteria. Twenty nine of these bacteria could not be reliably classified, which suggests that they can be new and undescribed species. Some genera of bacteria were present both in polluted and non-polluted sites (Altererythrobacter, Bacillus, Citromicrobium, Demequina, Labrenzia, Marinilactibacillus, Martelella, Microbacterium, Micrococcus, Pseudomonas, Sphingorhabdus, Stakelama, Vibrio and Zunongwangia), others were only exclusively found in one type of environment (non-polluted: Salinicola). Some bacteria were exclusively found in the roots (Hoeflea, Labrenzia and Microbacterium). We observed that the composition of the bacteria community change according to the presence of pollutants.

All the enzymes that we tested for (amylase, cellulase, protease, xylanase, pectinase and lipase) were found in our collection of bacteria (Fig. 2). The same was observed for traits that aid in plant growth promotion, such as improvement of phosphorous and nitrogen uptake and production of a hormone that induces cell division and, as a consequence, allows the plant to grow and develop.

This work revealed that this plant, relevant for the treatment of polluted soils, is inhabited by a diverse bacteria community. This community changes according to the type of environment, and has a potential for novel species and relevant compounds.