Marine pufferfish of the genus Takifugu, including Takifugu pardalis, contain the potent neurotoxin tetrodotoxin (TTX). TTX is distributed not only in pufferfish, but also in various other organisms, many of which are toxified exogenously by the food chain starting with TTX-producing bacteria. Therefore, pufferfish that are artificially reared with non-toxic feed from hatching do not contain TTX. On the other hand, small-sized freshwater pufferfish, including Pao suvattii, contain saxitoxins (STXs) instead of TTX. STXs comprise a group of neurotoxins involved in the toxification of bivalves, and the characteristics of the typical component STX are similar to those of TTX, including the molecular weight, toxicity, and intoxication mechanism. Although freshwater pufferfish are thought to accumulate STXs through the food chain starting with STX-producing cyanobacteria, it is unclear whether the marine Takifugu pufferfish can accumulate STXs equally to freshwater pufferfish, or whether freshwater pufferfish can accumulate TTX equally to marine Takifugu pufferfish if the toxin supply in the food is sufficient. In this study, we administered TTX and/or STXs to artificially reared non-toxic specimens of T. pardalis and P. suvattii to clarify the differences in toxin selectivity between marine and freshwater pufferfish. 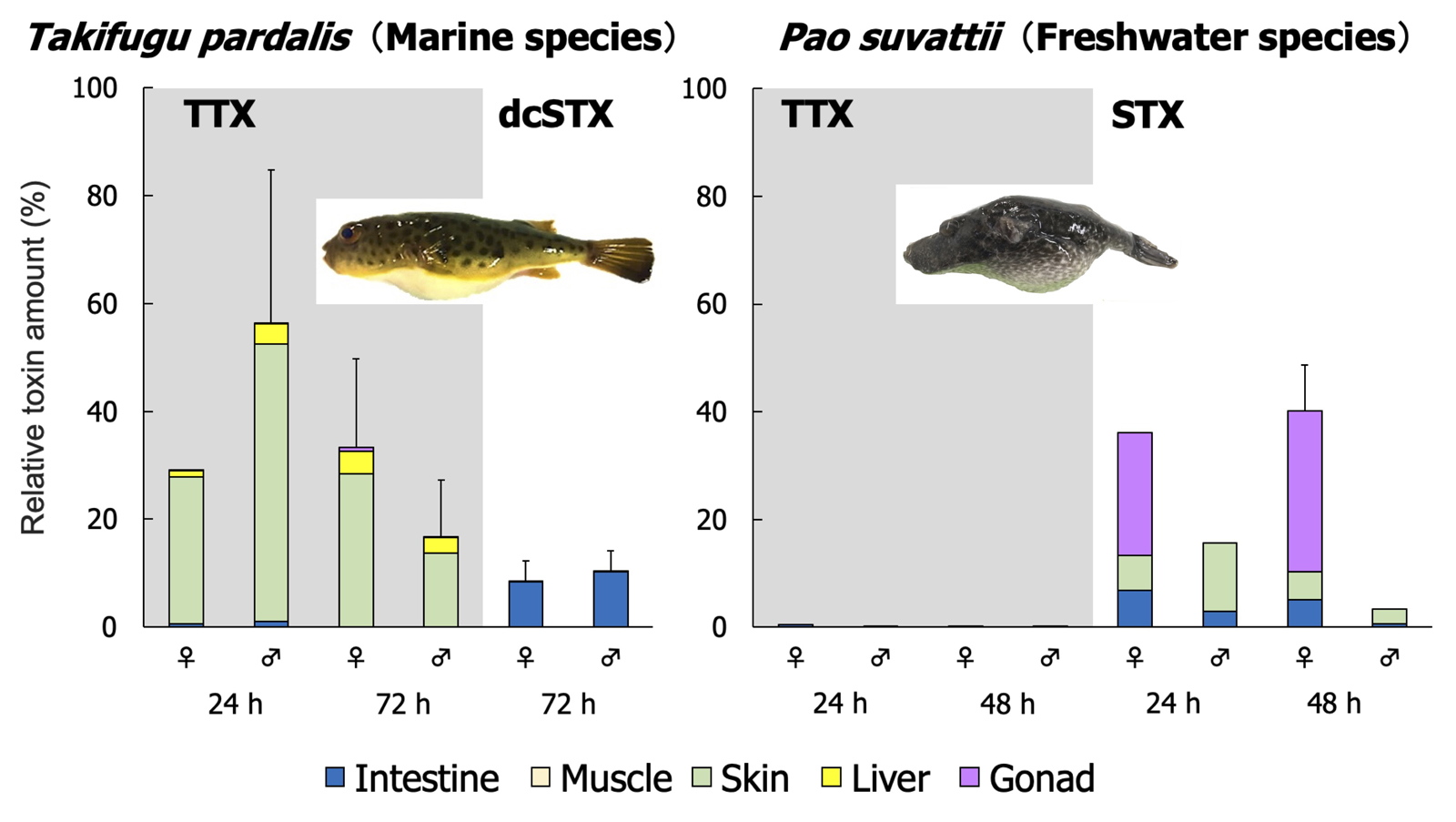 T. pardalis specimens were administered feed homogenate containing TTX or decarbamoylSTX (dcSTX) (dose of toxin, 55.2 nmol/fish) and P. suvattii specimens were administered feed homogenate containing TTX + STX (dose of each toxin, 19.2 nmol/fish) by oral gavage. The toxin content in the intestine, muscle, skin, liver, and gonads was quantified after 24 and 48 or 72 h by instrumental analyses. In T. pardalis, TTX administered into the intestine was absorbed into the body, and transferred and retained mainly in the skin and liver, while dcSTX was hardly retained in the body, although it partly remained in the intestine (Fig. 1). In strong contrast, in P. suvattii, little TTX remained in the body, whereas STX was absorbed into the body, and transferred and retained in the ovary and skin. The findings revealed that TTX/STX selectivity differs between the marine species T. pardalis and the freshwater species P. suvattii. T. pardalis, which naturally harbors TTX, selectively accumulates TTX and P. suvattii, which naturally harbors STXs, selectively accumulates STXs. In other words, the ratio of TTX/STX harbored by pufferfish is presumed to depend more strongly on the inherent TTX/STX selectivity of pufferfish than the prevalence of TTX/STX in prey organisms, though the molecular mechanisms remain to be elucidated.

Puffer fish saxitoxin and tetrodotoxin binding protein (PSTBP) isolated from the plasma of T. pardalis by Yotsu-Yamashita et al. (2001) has been implicated in the accumulation of TTX in Takifugu pufferfish. PSTBP-homologous proteins are widely found in marine toxic pufferfish of the genera Takifugu and Arothron, but not in non-toxic species and general fish. Our ongoing studies indicate that freshwater pufferfish of the genus Pao do not have the PSTBP gene, suggesting that PSTBP is not involved in STX accumulation or selectivity of freshwater pufferfish. Recently, we have obtained data suggesting that tributyltin-binding protein type 2 (TBT-bp2), the putative molecular evolutionary origin of PSTBP, are involved in PST accumulation in Pao freshwater pufferfish (Zhu et al., Toxins 2020;12:689). By analyzing and comparing the molecular phylogeny of such toxin accumulation-related proteins with the TTX/STX distribution profile in various marine and freshwater pufferfish species, it may be possible to estimate the evolutionary process in which the pufferfish acquired TTX/STXs.