Do you have pain on the lateral side of your knee (often diagnosed as iliotibial Band Syndrome)? 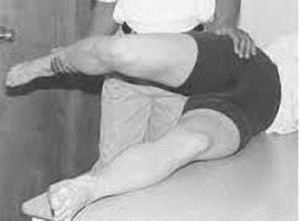 The primary method for determining tightness of the iliotibial band is using a physical examination test called “Ober’s Test”. This test consists of placing an individual in side-lying with the limb to be tested facing up. The examiner flexes the knee of limb being tested to 90° followed by raising the lower limb upwards and keeping it in line with the trunk. Next, the examiner lowers the limb towards the ground while keeping the thigh in line with the trunk. If the limb stops above horizontal, the iliotibial band is considered to be “tight”, especially if the other side drops below horizontal when tested (Fig. 1).

Our research used lightly embalmed cadavers to determine if Ober’s test findings changed by comparing results between performing the test with the iliotibial band intact versus cutting through the band (horizontally). Additionally, Ober’s test was performed after cutting through the muscles above the hip joint (on the lateral side) and the hip joint capsule to assess whether these tissues had any effect on Ober’s test results.