Fish is a source of long-chain polyunsaturated n-3 fatty acids (LCPUFA), and its consumption is associated with prolonged length of gestation,  decreased pre-term birth rates, increased birth weight. However, fish may contain a number of pollutants which may adversely affect gestational length, fetal growth and birth outcomes. Because fish contains both favorable and unfavorable substances, the net effect of  its consumption during pregnancy is still uncertain.

Between April and July 2013, we selected 114 women who gave birth to living babies, and divided them according to type and frequency of the fish consumed.

Fig. 1. Left panel. Monthly frequency of fish consumption in 114 pregnant women. Right panel. Distribution of women among the no fish eaters group and the 4 groups of fish eaters. 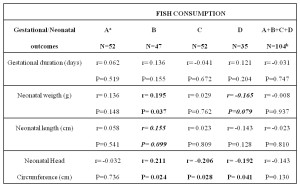 Fig. 2. Correlation between the type of fresh fish intake and gestational/ neonatal outcomes. a Type of fish: A (tuna and swordfish), B (mackerel, salmon, anchovy, garfish, spatula, sardine), C (sea gilt-head bream, sea bass, cod, sea bream, perch), D (shellfish). b Numbers do not add up to 104 (and % do not add up to 100) because some women consumed more than one type of fish. P values are typed bold-face if statistically significant.

Comparing the rates of gestational complications, PIH was significantly more frequent in non-fish eaters (group 0) than in fish eaters (20% vs 4.8%, P = 0.056). Among fish eaters, preterm birth occurred less frequently in group B compared with the other groups (2.1% vs 10.4%, P = 0.086) . Supplementation with DHA did not influence gestational or neonatal outcomes.

This is the first study in our geographical area on fish consumption in pregnant women and its influence on gestational and neonatal outcomes, taking into account the different categories of seafood and DHA supplementation. The mean frequency of fish consumption in our sample of pregnant women is almost half than the one recommended by FDA ( 1.2 times per week vs 2.0 per week).

Our conclusions can only be suggestive that maternal consumption of fish influences fetal growth depending on the amount and the type of fish consumed. In agreement with Oken we think that the  increased intake of fish with high content in DHA and low content in mercury during gestation is healthy.