Does immunotherapy in Multiple Sclerosis increase the risk of developing PML?

Progressive multifocal leukoencephalopathy (PML) is a rare and life-threatening brain disease caused by the JC virus. In multiple sclerosis (MS), natalizumab (Tysabri, Biogen) was already known to substantially increase the risk for PML by suppressing the immune system.

Recently, three PML cases have been reported in MS patients, two treated with Fingolimod (Gilenya, Novartis), the third with dimethylfumarate (Tecfidera, Biogen). As more and more therapies are trying to suppress the immune-system in the hope of stopping the progression of Multiple Sclerosis and as PML poses an important health risk, the clinical community should be vigilant and able of including all (new) available information into the most appropriate statistical model. 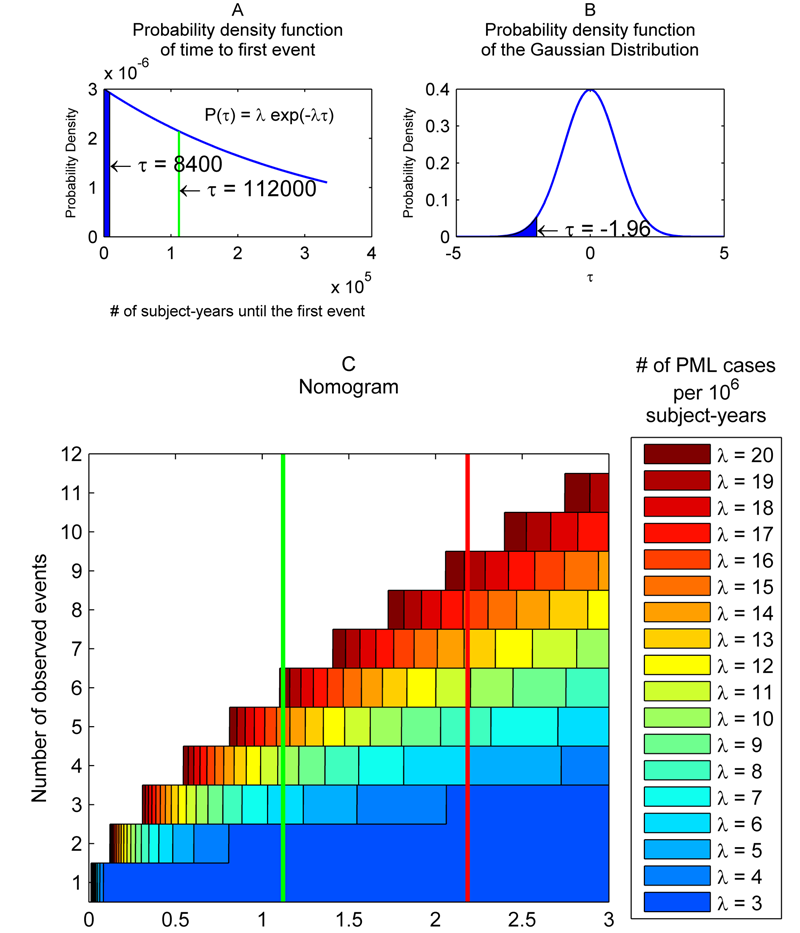 For the analysis presented in this paper, we assumed no elevated risk for PML in patients treated with either Fingolimod, either with dimethylfumarate and analysed whether the number of observed cases fall within reasonable limits.

As those probabilities are sufficiently large (> 5%), the currently available evidence does not allow to refute the initial hypothesis, i.e. we have no sufficient evidence of an elevated PML risk caused by either dimethylfumarate or fingolimod.

In the case of a single event (as is the case for dimethylfumarate), the probability distribution of the variable “time to next event” can be plotted (cf. Fig 1A). If this single event would have occurred in less than 8439 observed subject-years, we should be worried that dimethylfumarate induces an elevated risk of PML.

As the frequency of PML in healthy controls (here estimated from the literature as 3 cases per million subject-years) is an important parameter, we have provided a nomogram that allows an easy interpretation. The assumed background level corresponds to the darkest blue plot. The interpretation of the plot is such that for this background level, 3 cases are needed in 112 000 observed subject-years (green line) to reach significance and at least 4 cases in 218 500 patient-years (red line).

Assessing PML risk under immunotherapy : if all you have is a hammer, everything looks like a nail.
Van Schependom J, Gielen J, Laton J, Nagels G
Mult Scler. 2015 Jul 21