Does thyroid hormone deficiency in fetal life have adverse effects on cardiovascular system during adulthood?

Although newborn screening tests detect the fetal hypothyroidism and treatment by thyroxine is initiated promptly, this treatment does not always prevent the irreversible disorders created by TH insufficiency during fetal period.

Here, we made use of a rat model of fetal hypothyroidism (FH), which is based on administration of 6-propyl-2-thiouracil in drinking water of pregnant rats from the first day of pregnancy until delivery day (a model of transient hypothyroidism). Afterward, we evaluated the effects of this deficiency on cardiovascular system in adult male offspring. We observed decrease in hemodynamic parameters including systolic blood pressure, diastolic blood pressure, and mean arterial pressure in rats with fetal hypothyroidism (Tab. 1). In a previous study we could also show that heart size as well as left ventricular developed pressure and the peak rates of positive and negative changes in left ventricular pressure (indices of contractility) were lower in the isolated heart of offspring with FH.

We also examined three types of arteries (thoracic aorta, superior mesenteric and small intestine), which have specific effects on blood pressure. Our results showed that intima-media thickness (IMT) and density of nuclei of endothelial cells (ECs) are lower in aorta (Fig. 1) and superior mesenteric arteries of adult offspring with FH than in control group. Blood pressure is known to have a direct association with both IMT and ECs.

Releasing both vasoconstrictor and vasodilator agents by ECs could affect hemodynamic parameters. 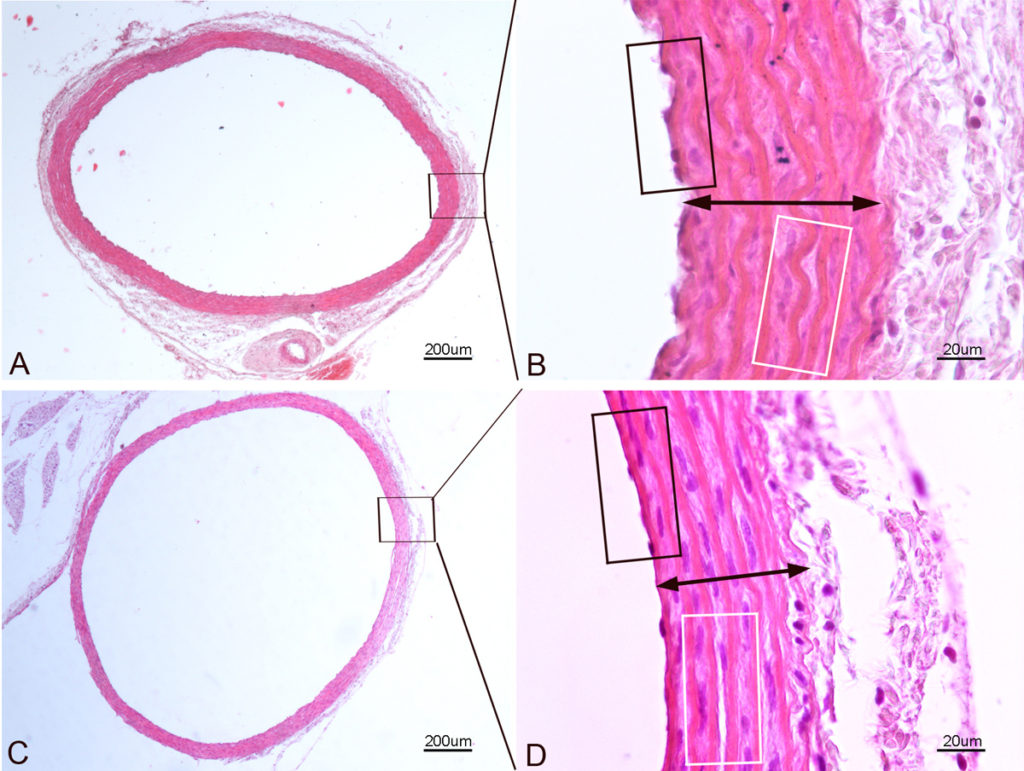 Fig. 1. Histological changes in the thoracic aorta wall of rats with fetal hypothyroidism. Panels A & B show aorta section from control rats and panels C & D show this artery in the fetal hypothyroidism. The intima-media thickness is illustrated with a black arrow. Nuclei of endothelial cell and nuclei of smooth muscle cells have been indicated by a black and white rectangle respectively.

In conclusion, we assessed for the first time the FH effects on both vascular structure and function of heart. These findings show that THs are key factor in development of the cardiovascular system, and warrant paying more attention to pregnant women with hypothyroidism.