Instead of relying on traditional drug modalities, gene therapies rely on delivery of  nucleic acids into patient’s cells to prevent, slow, stop or treat diseases. In the past decades, gene therapy has been broadly studied in pre-clinical and clinical trials. Adeno-associated virus (AAV) vectors rely on a small non-pathogenic viral shell for gene delivery. To date, several AAV vector drugs have achieved the approval of the United States Food and Drug Administration for the treatment of rare monogenetic diseases. The first of these such drugs, Luxterna, is now utilized in the posterior eye for the treatment of a rare form of inherited blindness. However, to date no AAV-based gene drugs have been applied to treat blindness resulting from diseases in the anterior eye. Interestingly, AAV vector administration to anterior eye includes several options and in the present study, we investigated AAV gene delivery by multiple capsid serotypes to multiple ocular and periocular compartments following subconjunctival (SC) injection, which is relatively simple and safe without resultant ocular tissue damage. 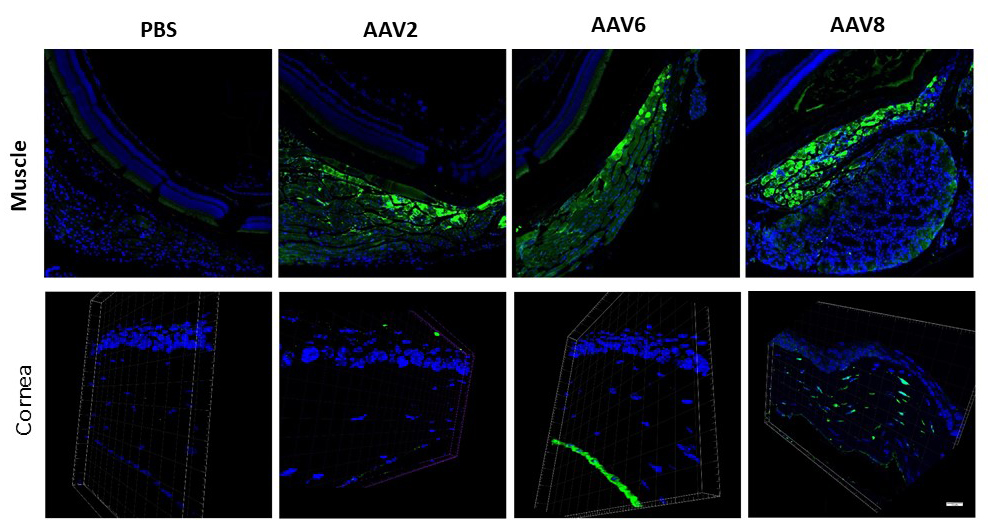 To determine the utility of AAV treatment of various ocular disorders following SC injection, we performed a survey in mice with several natural AAV capsids. First, injection tolerability was evaluated following SC injection of a dye to monitor distribution. No safety concerns were noted with dye dispersion observed primarily in the periocular tissues with no obvious penetration in the eye. In contrast, following AAV vector injection, the transduction efficiency and vector distribution was AAV serotype dependent in several tissues including the eye lid, conjunctiva, and cornea, as well as the periocular tissues including eye muscles (Fig. 1). One of the most striking findings is related to discrete cell transduction in the cornea; AAV serotype 6 (AAV6) vectors appeared restricted to the corneal endothelium layer while AAV8 particles transduced the corneal stromal layer specifically (Fig. 1).

The results indicated that, depending on the target tissue involved in anterior ocular diseases, the choice of the AAV serotype and the suitability of the SC injection should be taken into consideration. For example, for corneal lysosomal storage diseases, in which the corneal stromal layer involved, one may consider using AAV8. Alternatively, for treatment of Fuch’s dystrophy which is due to deficiencies in the corneal endothelial layer, AAV6 vectors administrated via SC injection may be a prudent choice as they transduce the only relevant corneal cell type. Collectively, the data herein serve as a foundation for selection and the further development of AAV vectors for ocular disorders following a simple and safe SC injection.