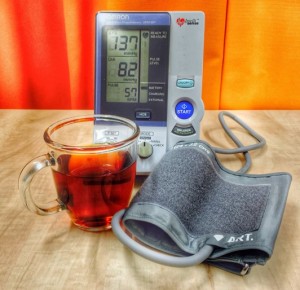 High blood pressure is a common condition in which the chronic force of the blood to the walls of the arteries may eventually cause health problems. According to the World Health Organization, high blood pressure causes almost 13% of all deaths worldwide. Next to medical treatment, changes in lifestyle and diet have demonstrated to counteract high blood pressure. With respect to diet, restriction of calories and salt intake are important, but in our recent clinical study with medically untreated hypertensive volunteers, we showed that drinking ordinary black tea may also be of benefit. Daily consumption of two cups of black tea for eight days reduced blood pressure by about 2% and even by 4% shortly after the last cup of tea. This may sound as quite modest, but even such a small decrease is associated with about 10% lower risk for having a stroke or heart attack. Further analysis revealed that tea affected the stiffness of the arteries. Another interesting observation was that in the same group of people eating 50 grams of saturated fat (representing a heavy meal) caused an acute rise in blood pressure. Drinking tea abolished the fat-induced blood pressure rise. Whether drinking tea with a meal should be encouraged requires more research. Others have demonstrated similar effects of tea on blood pressure, which has recently convinced the Dutch Health Council to recommend drinking tea as part of a healthy diet.