Aortic stenosis (AS) is the most common type of valvular heart disease and its prevalence increases exponentially with age. Degenerative changes continue to be the most common pathologic causes. In terms of pathologic AS phenotypes, there are two main courses, fibrosis and calcification. Extensive thickening due to fibrosis can be observed during the process of AS. On the other hand, calcific nodule formation is often found in later stages of degenerative aortic valves. These two pathologic phenotypes variously contributed to the development of AS. 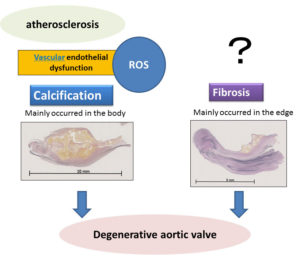 Different mechanisms are considered to contribute to the progression of AS in pathologically different aortic valves, such as predominantly fibrotic valve and predominantly calcified valve.

We explored the difference of characteristics of these pathologic different valves in AS, using 50 consecutive aortic valve samples extracted during the operation of aortic valve replacement in AS.

On the other hand, oxidative stress differently contributed these pathologic changes. Three-nitrotyrosine, which is a marker of reactive nitrogen species, was detected at a significantly greater intensity in the severely calcified type and the grade of calcification was finely correlated with the detection of 3-nitrotyrosine.

The progression of AS develops through multiple pathways such as inflammation, angiogenesis, osteogenesis and extracellular matrix remodeling, but the predominant force differs in each patients. The phenotypic changes of fibrosis and calcification are evoked from different cellular backgrounds so that the different localizations of aortic thickening are developed.

The causative mechanism of disease progression was presumed to be significantly different between the two pathologic types, calcification and fibrosis. The risk factors for calcification of the aortic valve have been demonstrated in numerous reports, whereas the risk for fibrosis had not been elucidated yet. The more vigorous investigation about the mechanism of fibrosis is also warranted.