Duloxetine is a dual serotonin-norepinephrine receptor inhibitor that is commonly used as an antidepressant. This drug has traditionally been used for chronic pain conditions, such as fibromyalgia and back pain, showing positive recovery outcomes. Given these analgesic properties and the advent of multimodal analgesic regimens in surgical settings, recent randomized trials have hypothesized that perioperative duloxetine could potentially reduce acute pain after surgery, spare opioid utilization and improve patient outcomes. Therefore, a meta-analysis looking at the impact of duloxetine for postoperative outcomes was needed in order to draw better conclusions. 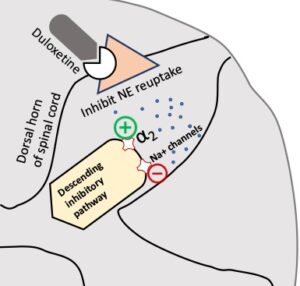 In this work, a total of 9 trials comprising 574 patients were included. After pooling these studies, duloxetine significantly reduced pain scores from 4 hours up to 48 hours after surgery with a moderate clinical effect. Importantly, this drug was also useful to decrease opioid consumption within the first 48 hours and reduced the risk of postoperative nausea and vomiting by 31% compared with placebo. Other side effects were evaluated, such as pruritus, headache or dizziness, but there were no statistically significant differences.

Our findings highlight the effectiveness of duloxetine administered before surgery for postoperative pain control. Most of the trials used a short scheme of 60mg PO 1 to 2 hours before surgery and an additional dose 24 hours after surgery. It is important to note that few studies have examined the efficacy of this drug as part of a multimodal analgesic regimen, thus further investigation within this context should be undertaken in order to include duloxetine in the multimodal armamentarium.

From the pharmacokinetic standpoint, duloxetine reaches a peak plasma concentration approximately 6 hours after dosing and has an elimination half-life of 10-12 hours. This drug may enhance the effect of anesthetic drugs such as benzodiazepines or increase the risk of serotoninergic effects from opioids like meperidine. It is therefore recommended to consider these aspects when using duloxetine.

With regards to the mechanism of action, several studies have shown the long-term analgesic effects of duloxetine through neural modulation. According to experimental studies, duloxetine inhibits the nociceptive inputs along the spinal cord. It is thought to act on voltage-gated channels (isoforms Nav1.7 and Nav1.4) located especially in unmyelinated C-type nerve fibers. There is also evidence suggesting the effects on the descending inhibitory pathways located at the dorsal horn of the spinal cord (activating alpha-2 receptors through the increment of norepinephrine and inhibiting Na+ channels).

Further evidence is needed to better understand the role and mechanism of action of duloxetine in postoperative acute pain.