Ecotoxicology at the era of biocontrol expansion

The French network ECOTOX questioned recently the implementation of ecotoxicology tools and concepts within the elaboration of biocontrol strategies. Ecotoxicology is defined as the science which studies the impacts of human activity (industry, agriculture, urban growth…) on living beings in the environment. It is a multidisciplinary science in which physiologists molecular biologists, chemists, ecologists… cooperate.

Biocontrol strategies are based on the use of living organisms or on the use of natural substances (also known as biopesticides) to control the populations of pests, weeds or deleterious microorganisms. The living organisms gather macroorganisms acting as predators or parasitoids (e.g. insects or nematodes) or microorganisms (e.g. bacteria, fungi, viruses) acting as pest pathogens or biostimulants (promoting the plant immunity against pest). Natural substances group mineral preparations (e.g. sulfur) or compounds extracted from animals (e.g. pheromones or tallow), microorganisms (e.g. toxins) or plants (e.g. essential oils or plant blends). At a first glance, biocontrol solutions are attractive because of their natural origin which suggest that they could constitute environmentally-safe alternative to agrochemicals. The aim of biocontrol strategies is to control the populations of organisms harmful for human’s activities or their health. As a consequence, it appears necessary to address the ecotoxicological impacts of biocontrol strategies to ensure their sustainability. 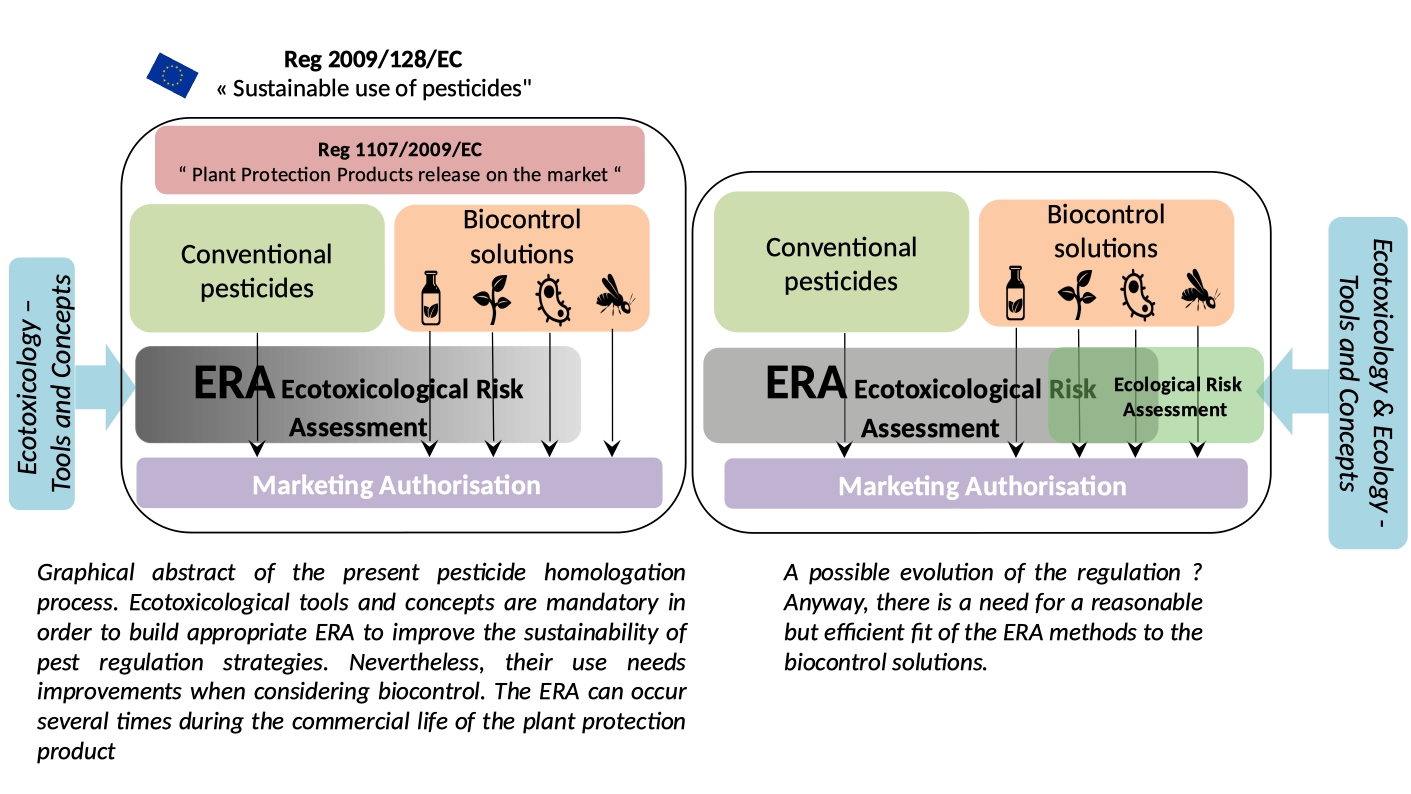 Three questions came up:  i) which biopesticides are in need to be studied in priority, ii) to what extend such studies should be done and on which organisms and iii) last but not least, what can ecotoxicology teach us in order to improve biocontrol regulations and homologation processes.

As for conventional pesticides, the biopesticide the most used, the most toxic and/or the most present in the environment, have to be the most studied. Divergences between synthetic and natural active ingredients appeared when we considered the use of living organisms. Indeed, the use, i.e. the release in the environment, of living organisms either macro- or microorganisms can be conceptually viewed as a possible source of invasion. Ecological studies are relevant for macro-organisms, but the micro-organisms study appeals for both microbial ecology and microbial ecotoxicology to draw a complete figure of their environmental impact as many of them produce toxins.

Biocontrol regulations are diverse upon the countries which can bring to divergences in the legal definition of biocontrol. Apart an obvious need for homogenizing the regulations internationally, environmental effects of biocontrol agents have to be tested. We highlighted several similarities between conventional pesticides and biopesticides from the point of view of an ecotoxicologist. Technically speaking, several methods used to trace the active compounds of the pesticides in the environment can be also used to trace the active ingredients of the biopesticides. The Ecotoxicological Risk Assessment (ERA) concept can thus be successfully applied to natural substances too. Actually, most of the technics and concepts used with synthetic compounds can also be used with natural substances.

In many cases, conventional pesticides have been banned because of their side effects on non-target organisms (including Human health) and/or loss of efficiency (resistance). Both parameters have to be considered for an appropriate use of biocontrol products and strategies in order to both respect ecosystem services provided by ecosystems and environment health. Introducing the concepts and methods of ecotoxicology in biocontrol strategies elaboration is an important lever to ensure the sustainability of the biocontrol.