Inflammatory bowel disease (IBD) is a collective term for ulcerative colitis (UC) and Crohn’s disease (CD). IBD is no longer a disease mainly seen in Europe and North America and is now a global disease. The disease is characterized by repeated relapse (active stage) and remission (quiescent stage). The etiology of IBD is generally stated as unknown. However, we regard a westernized diet in an affluent society as a ubiquitous environmental factor among various environmental factors underlying IBD. It is apparent now that diet shapes gut microbiota. A westernized diet, i.e., high in animal protein and fat and low in dietary fiber, tends to decrease microbial diversity (dysbiosis), resulting in production of microbial metabolites that are proinflammatory and detrimental to our health. This is a risk factor not only for IBD but also for other metabolic chronic diseases. In contrast, a plant-based diet (PBD), i.e., low in animal protein and fat and high in dietary fiber, tends to increase microbial diversity, resulting in sufficient production of beneficial metabolites such as butyrate that are anti-inflammatory. PBDs are listed as variations of USDA healthy eating patterns and are recommended to the public to prevent common chronic diseases. We have provided PBD for IBD inpatients since 2003 when educational hospitalization was also started. 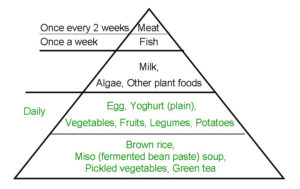 Lifestyle modification including dietary habits is not easy. Replacement of an omnivorous (westernized) diet with a PBD can be achieved by a short period of educational hospitalization. The percentage of patients admitted for educational hospitalization out of the total number of admitted patients with UC was approximately 30%. UC patients who did not need immediate treatment chose a convenient time, e.g., their (school or company) seasonal holidays. Subjects were 60 cases (initial episode cases 29, relapse cases 31; proctitis 31, left-sided colitis 7, extensive colitis 22; median age 34, interquartile range (IQR) 22-54; referred cases 38, non-referred 22). The median days of hospitalization was 13 (IQR 11-16).

PBD was a lacto-ovo-vegetarian diet (protein 16% of energy, fat 19 %, carbohydrate 66%) with fish once a week and meat once every 2 weeks (Fig. 1). PBD score (see below) was 35. A single serving was about 30 kcal per kg standard body weight. Patients were provided with educational material on lifestyle diseases, healthy lifestyle habits, pathogenesis of IBD, and information on PBD. At the end of the hospitalization, a qualified dietitian gave dietary guidance to the patient and the person who prepared the patient’s meals. Patients were advised to continue with the PBD after discharge. 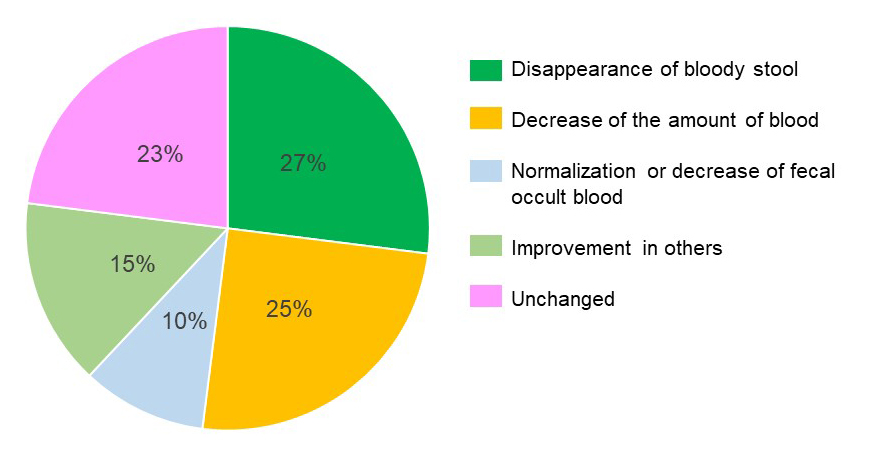 Eight cases relapsed during follow-up. The cumulative relapse rates at 1, 2, 3, 4, and 5 years of follow-up were 2%, 4%, 7%, 19%, and 19%, respectively. These relapse rates are far better than those previously reported, e.g., around 50% at 1 year for initial episode cases. Four UC patients achieved remission without medication during the educational hospitalization. Except for our case report, this is the first reported successful induction of remission by dietary manipulation without medication. The majority (77%) of patients experienced some improvement such as disappearance or decrease of bloody stool during the hospitalization (Fig. 2). A PBD score (PBDS) was calculated from a questionnaire. A higher PBDS indicated greater adherence to the PBD. The mean short-term (median 14 months) and long-term (3 years 10 months) PBDS after hospitalization were 21.6 and 18.7, which were significantly higher than the mean baseline PBDS of 7.3 and 12.3, respectively. Educational hospitalization seemed to enhance the self-management skills of patients against relapse.