Effect of Femoral offset in THA ?

The Femoral Offset (FO) is defined as the perpendicular distance between the femoral head’s center of rotation and the long axis of the femur, which is estimated using an anteroposterior (AP) radiograph of the pelvis as shown in Figure 1. In total hip replacement (THR), it is assessed preoperatively, and the surgeons can precisely control the FO to optimize abductor muscle strength, range of motion (ROM), and stability. Clinical studies and computer modeling have indicated a correlation between an increase in ROM and abductor muscle strength with increased FO. However, some authors have suggested that if the anatomical offset is not restored, the patient may develop fatigue, impingement, limp, or prosthesis dislocation. A decrease of the FO in clinical studies has been implicated in reduced ROM and abductor muscle strength, gait abnormalities, and increased polyethylene wear.  Several studies have reported on whether FO affects the muscle strength and ROM, but limited data exists on whether the FO affects stem stability during gait. Therefore, our objective was (1) to determine the change in muscle activity at the hip joint during gait for different FOs in the context of THR and (2) to evaluate the bone implant micromotion of the femoral stem during gait. 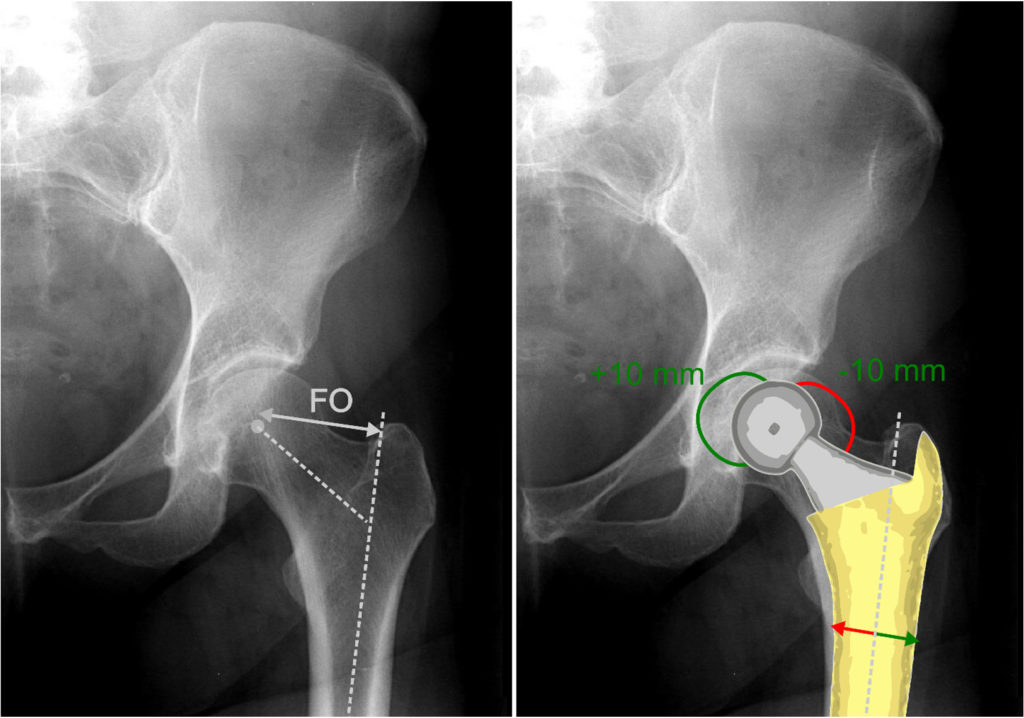 A Trabecular femoral stem prosthesis (Trabecular Metal™, Zimmer, USA) was included in an OpenSim model and five case studies were analyzed for resultant forces during gait: decreased (-10 and -5 mm), increased (+5 and +10 mm), and restored (0 mm) FOs. Boundary conditions and corresponding vertical peak load of each FO obtained from the OpenSim for a gait cycle were applied, and the model was solved using ANSYS 13.0 to evaluate the stress distribution at the bone-stem interface in the medial and lateral elements contained in two rings of 12 mm height around the proximal and distal portion of the stem. Our largest value for micromotion of 100.0 um was below the critical limit and was comparable to values obtained using cadaveric femurs and no significant differences in micromotion were noted across the varying FOs. The lack of correlation between FO and micromotion suggests that a variation of the FO within 10 mm of the anatomical offset does not affect bone implant micromotion during gait, but does have an effect on the pattern of muscle loading forces during gait.