The major function of the kidneys is to eliminate waste products and excess fluid from the body, through the production of urine. Patients with kidney failure need dialysis, typically three sessions per week, as an artificial replacement for lost kidney function. The fluid that patients accumulate between dialysis sessions is referred to as interdialytic weight gain (IDWG). Patients who accumulate a lot of fluid (i.e. have high IDWG) can develop complications that cause heart problems and reduce life expectancy. IDWG is affected by the amount of sodium (or salt) these patients consume in their diet because sodium absorption is accompanied by fluid absorption, and high amounts of sodium can also make patients thirsty. Patients treated with dialysis should restrict dietary sodium intake, but sometimes this is difficult to achieve owing to the amount of salt in processed foods. Therefore, a drug that reduces sodium absorption could be beneficial to these patients. 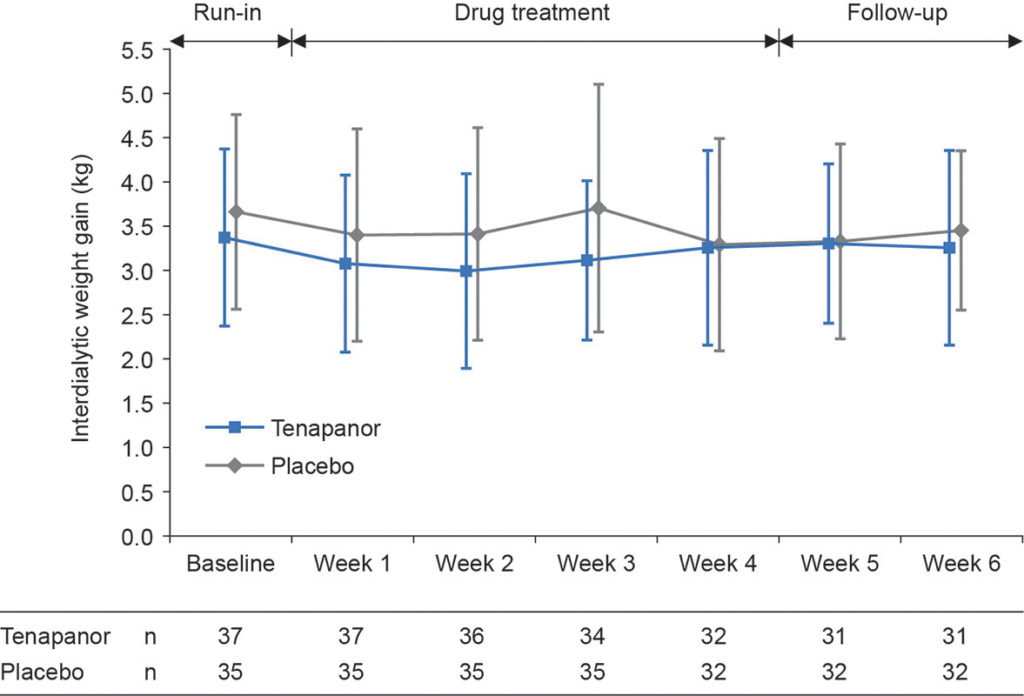 Fig. 1. Interdialytic weight gain (IDWG) during the study. Data are shown as mean ± 1 standard deviation. At a significance level of 0.05, the differences between patients treated with tenapanor and placebo in the change in mean IDWG expressed as a percentage of baseline post-dialysis weight over weeks 1–4 were not statistically significant (p = 0.12–0.79).

Tenapanor (Ardelyx Inc., Fremont, CA, USA) is a novel agent that reduces absorption of dietary sodium. It works by blocking the activity of a gut transporter called sodium/hydrogen exchanger isoform 3 (NHE3), which plays an important role in controlling sodium levels and regulating the amount of fluid in the body. One key potential benefit of tenapanor is that very low levels of the drug are absorbed into the blood, therefore lowering the risk of developing side effects.

A phase 2, randomized, double-blind, placebo-controlled clinical trial assessed whether tenapanor, by reducing absorption of sodium, could reduce IDWG in patients with advanced kidney disease treated with hemodialysis (a commonly used form of dialysis). After a 2-week run-in period, 72 patients were assigned to tenapanor at doses of 5–45 mg twice daily (37 patients) or placebo (35 patients) and received treatment as outpatients for 4 weeks, before a 2-week follow-up period. Over the treatment period, no significant differences in IDWG between patients treated with tenapanor and those treated with placebo were seen (Fig. 1). Similar results were observed in a separate group (16 patients) treated as inpatients for 1 week and outpatients for 3 weeks. During the 1-week inpatient period, stool sodium levels were measured. Tenapanor treatment resulted in significantly higher stool sodium levels than placebo (Fig. 2), consistent with tenapanor reducing sodium absorption. Stool weight was also significantly higher in patients receiving tenapanor (mean ± standard deviation, 173 ± 68 g/day) relative to placebo (86 ± 30 g/day; p < 0.01). Evaluation of the drug profile in the body confirmed that only very small amounts of tenapanor were absorbed into the blood. Diarrhea was the most commonly reported side effect of tenapanor, which was as expected because the increase in stool weight resulting from higher stool sodium and water content also had the effect of softening the stools. 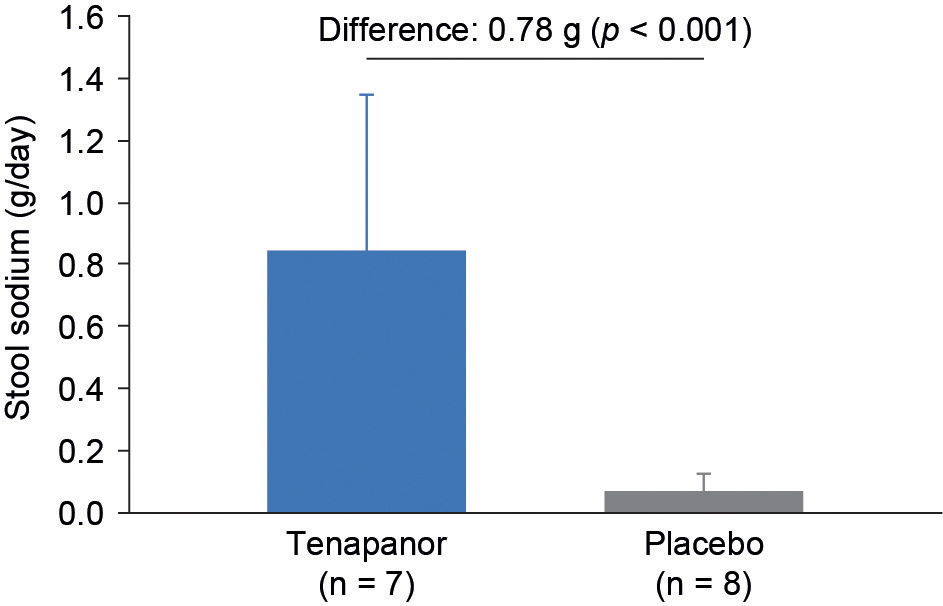 Fig. 2. Stool sodium levels in patients receiving tenapanor or placebo as inpatients for 1 week. Data are shown as mean + 1 standard deviation over the 1-week period. At a significance level of 0.05, the difference between treatments was significant.

The observations of increased stool sodium and weight in patients who received tenapanor compared with those who received placebo show that tenapanor has effects in patients on dialysis. The effect on stool sodium is equivalent to a reduction in consumption of table salt of about 2 g/day, which could be beneficial in helping these patients reduce their overall sodium load. However, there was no observed effect on IDWG. This could be due to multiple factors, such as the body mobilizing its natural reserves of sodium to counterbalance the reduction in absorbed sodium, dietary sodium intake (which was not controlled in the outpatient setting) or the fluid lost due to diarrhea leading to increased thirst and fluid consumption, and the dialysis process itself compensating for reduced fluid uptake. Further studies are required to evaluate the potential clinical benefits of pharmacologically reducing sodium absorption in patients on dialysis.