Protein supplementation has become common practice for many competitive and recreational athletes. Since a variety of protein sources and multi-ingredient formulations are marketed, athletes and nutritional coaches would need to know more on the effectiveness of such products. Different formulations may include, for example, carbohydrates, creatine, BCAAs, L-carnitine, casein, soy, or bovine colostrum, in addition to whey protein. The research question was whether the protein alone supplementation has comparable effects to enriched formulas or these additional ingredients might provide an enhanced effect on resistance training and muscle mass gain.

We collected all studies that compared two groups of resistance trained adults in muscle mass and strength after a minimum period of 6 weeks. In these studies one group was administered whey protein-containing supplements, administered alone or as a part of a multi-ingredient formula, and the other group was administered a calorie equivalent contrast supplement from carbohydrates or other non-whey protein sources. After examining more than 3000 studies, only 9 publications matched with the inclusion criteria for this review.

When participants ingested whey protein, meaningful extra gains in muscle mass and strength, measured in terms of 1-RM (the load than can be lifted once but not two times) in bench press, squat or leg press exercises were observed. The following figure depicts the average extra gain increase, in kg of muscle mass or maximal strength, that would be elicited from the ingestion of only whey protein or multi-ingredient compared to when athletes ingest only carbohydrate or other protein sources (baseline values). 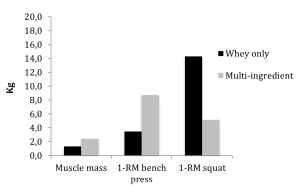 In studies that whey protein containing supplements have maximized resistance training outcomes in well-trained individuals, meaningful responses have been mainly observed when supplements were administered based on the participants’ body weight (1.2 to 1.5 g per kg per day) and consumed throughout the day in 3 to 4 servings, for example: breakfast, lunch or pre workout, post workout and/or night.

Since trained individuals have been shown to display a limited margin of improvement compared to novice or less trained counterparts, from the practical point of view, consuming whey protein containing supplements would have a meaningful impact for well-trained athletes. For example, consuming only whey protein instead of carbohydrate would create an additional increase of 1.3 kg or 3.5 kg on muscle mass and 1-RM bench press respectively. Furthermore, when a multi-ingredient including whey protein, carbohydrate and creatine is ingested, an extra increase on maximal strength would be also obtained. For example, for a typical 80 kg recreationally trained body builder with a 1-RM baseline performance of ~100 kg in bench press and ~120 kg in squat, these figures would represent an extra increment of about 2.3% of body weight (from muscle mass), 3.5% of 1-RM bench press, and 4.1% of 1RM squat. These outcomes would be meaningful for a well-trained athlete after 6 to 12 weeks of training.

In summary, the results from our investigation indicate that when resistance trained individuals consume whey protein alone or as a part of multi-ingredient, they would maximise the expected training outcomes in terms of muscle mass and strength gains when compared with the use of only carbohydrate or other plants based protein sources such as rice or soy. Nevertheless, it is important to highlight that this benefits on muscle mass and upper body would be more evident when multi-ingredients combining whey, carbohydrate and creatine are ingested before, during and after the workout.