When the skin is cut, or otherwise injured, a spontaneous electrical current is created immediately at the wound and this promotes healing. Several studies have demonstrated how naturally generated electrical fields cause movement of skin epithelial cells, for example, within the wound to stimulate tissue repair. Our new studies reveal that the functions of human macrophages, a type of white blood cell, are also strongly influenced by electrical signals of strengths similar to those generated in the body, and that these aid in driving the healing process. Macrophages are key cells in wound healing, in particular during inflammation and repair and are also essential in fighting and controlling bacterial infection. Unravelling the signals that control macrophage functions has focussed primarily on chemical and biological mediators, such as cytokines and bacterial products, with little known about their responses to the physical stimulus of an electric field. 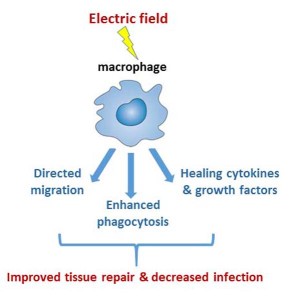 We show that electric fields strongly impact the direction in which macrophages move. On tissue wounding, the centre of the wound becomes the negative pole (cathode) and the wound edge becomes the positive pole (anode). The flow of ions from the wound edge to the centre creates an electrical potential. Under the influence of an electric field, we showed that macrophages move towards the positive pole. This equates to movement to the edge of the wound, where macrophages would then produce chemical mediators to influence neighbouring cells to accelerate healing. In contrast, blood monocytes, the precursors of macrophages, migrated in the opposite direction (to the cathode). Thus, on tissue damage, monocytes would be predicted to be attracted from damaged blood vessels to the centre of the wound before maturing to macrophages and moving anodally to the wound edge. This may offer an alternative explanation to why, on tissue wounding and immediate receipt of an electrical signal, monocytes /macrophages migrate into the breach to begin wound repair.

Strikingly, we discovered that electric fields also significantly enhanced the ability of macrophages to engulf and digest extracellular particles (phagocytosis). Phagocytosis is an important process in wound healing through which macrophages clean the wound site, limit infection and allow the repair process to proceed. Critically, electric fields enhanced the uptake and clearance of a variety of targets, including latex beads, apoptotic neutrophils (expended white blood cells) and the opportunist fungal pathogen Candida albicans, all of which engage different classes of recognition receptors on the macrophage surface. These electric field-induced functional changes were accompanied by clustering of phagocytic receptors and enhanced activity of important signalling molecules that drive phagocytosis. Electric fields also selectively augmented the production of protein modulators associated with the healing process.

In some instances, such as diabetes, the body’s ability to heal is compromised and wounds can become infected. These conditions are huge burdens personally and to Health Services. Often there is a lack of macrophages present in such wounds. In these instances, the application of  ‘synthetic’ electric fields using clinical devices would assist the repair process, not only by attracting macrophages to damaged sites to support healing but also by changing their properties to facilitate wound repair and importantly to reduce infection (Fig. 1.). The use of synthetic electrical signals or ‘electrotherapy’ has been used to treat a wide array of symptoms e.g. Transcutaneous Electrical Nerve Stimulation (TENS) and there are now several clinical devices for wound healing based purely on electrical stimulation. Through application of synthetic electric fields, our findings suggest a novel approach to speed up tissue repair and reduce infection in conditions where macrophage activity is critical.