Stimuli responsive materials are promising for designing the next generation of drug delivery systems. Such materials would enable drugs to be released on-demand or in response to patient needs, specifically at the target site, minimizing side effects. Electric-stimuli responsive systems are particularly interesting for this purpose because they can be used to develop programmable drug delivery implants which can be easily miniaturized. 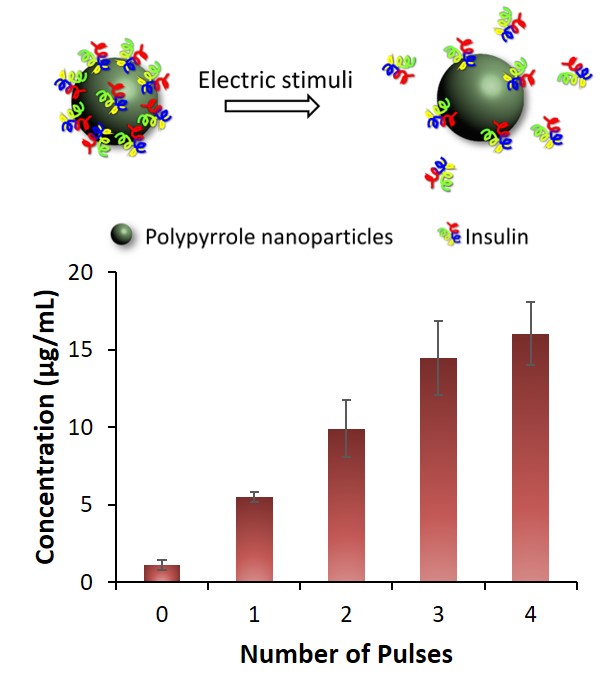 Fig. 1. Insulin is loaded on the surface of the polypyrrole nanoparticles. When -1 V is applied for 2 min as a pulse, the attached insulin can be released. The amount of insulin released increases with increasing number of stimulation pulses.

Although several small molecule drugs have been released from electric-stimulus responsive materials, releasing peptides and protein-based therapeutics is significantly more challenging. These molecules have emerged as a new class of highly potent and target-specific pharmaceutical agents. However, lack of effective delivery methods restricts their widespread clinical applications. Typically, these molecules have less than 2% oral bioavailability. Consequently, they are administered through injections which may be invasive, painful, and prone to infections. An additional limitation arises in case of patients with chronic diseases who are likely to not adhere to prescribed regimens in the long term.

In our recent paper published in Nanoscale in 2017, we have shown that it is possible to mitigate several of the aforementioned challenges by using nanoparticles of conducting polymers as carrier materials for storing the therapeutic molecules. Conducting polymers are organic polymers that conduct electricity. They change their shape and size when they are electrically stimulated, thereby releasing the incorporated drug. In our study, we have used insulin as a clinically relevant model polypeptide and polypyrrole as the carrier material. Insulin was bound to the surface of the polypyrrole nanoparticles, resulting in drug loading as high as 51 wt%. When a weak voltage (‑1 V) was applied, the polymer backbone was reduced, altering the strength of interaction between the nanoparticle and insulin, thereby evoking drug release (Fig. 1). The benefit of using nanoparticles of conducting polymers as opposed to other forms (e.g. films) was that substantially larger drug loading could be obtained compared to previously reported approaches owing to the large surface-to-volume ratio of the nanoparticles.

We confirmed that the biological activity of insulin was not compromised in the process of electrical stimulation by performing experiments in mice. A solution of insulin released from the nanoparticles and a solution of fresh insulin at the same concentration were injected into two sets of mice. The drop in blood glucose levels was monitored over time as a surrogate of insulin activity. Both sets of mice showed similar blood glucose profiles ascertaining that the insulin discharged from the nanoparticles was bioactive (Fig. 2).

Fig. 2. The bioactivity of the insulin released from the nanoparticles after electrical stimulation was the same as a standard solution of insulin at the same concentration. The bioactivity was determined by measuring the gradual drop in blood glucose levels of mice injected with the released and standard insulin solutions.

Insulin could be released in a pulsed manner with repeated stimuli (Fig. 1), suggesting the potential of using conducting polymer nanoparticles for developing externally controllable, programmable, and implantable drug delivery systems. These devices would create an avenue for the development of personalized medicine. Although we have used insulin in these studies, our approach is general, and could be extended to other polypeptides useful for the treatment of various chronic diseases that require controlled, localized and repetitive drug doses.