Most patients with chronic illnesses are treated with oral drugs and injections. These delivery methods are plagued by low drug efficacy and nonspecific side effects. In addition, studies estimate that as high as 60% of the patients do not take their medicine on time owing to a variety of reasons ranging from forgetfulness to fear of needles.

We have developed a strategy that can store drugs locally and release them on demand, and in the future, could be automated to release specific quantities of drugs at predetermined time points. We use a polymer with pH-sensitive solubility as a drug carrier and coat an electrode with a solution containing both the drug and the polymer. After the solution evaporates, a thin nanoscale film of drug-encapsulated polymer is attached to the electrode. Another layer of polymer that is not pH-sensitive in the pH range of interest is used as a secondary coat to prevent film delamination (Fig. 1A). Upon applying an electric potential or current to the electrode, water is reduced at the electrode surface, generating hydroxyl ions which increase the local pH in the vicinity of the electrode. The increased pH favors dissolution of the pH-sensitive carrier polymer with concomitant drug release within a few seconds (Fig. 1B and 1C). 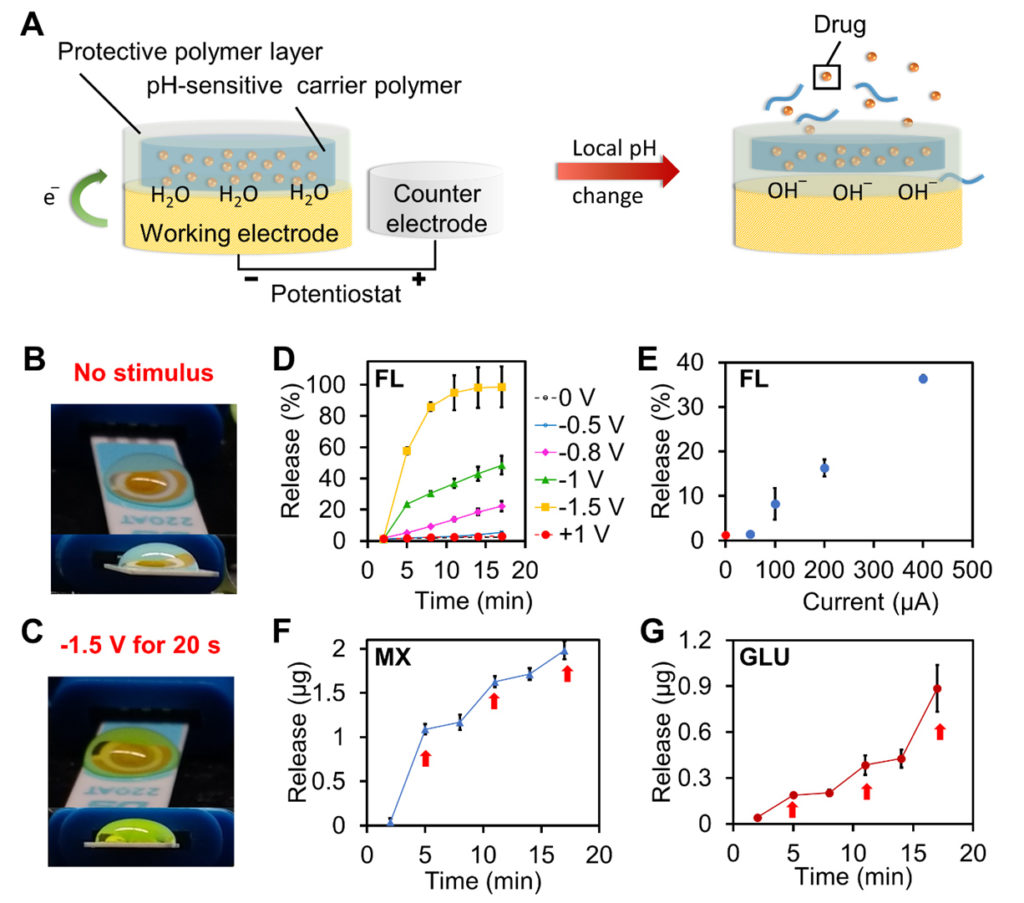 Fig. 1. Conceptual representation of our drug delivery strategy (A). Local pH changes upon application of an electric field result in dissolution of a nanometric drug-loaded polymeric film with pH-sensitive solubility and concomitant drug release Photograph of a film loaded with fluorescein (FL, a green dye used for ease of visualization) in an isotonic saline solution when an electric field is not applied (B). FL is released when a voltage (-1.5 V) is applied resulting in the characteristic green color of the solution (C). FL release increases with application of increasing voltages (D) and currents (E). Each voltage/current data point represents a stimulation time of 20 s. On-off release of (F) meloxicam, MX, and (G) glucagon, GLU, an anti-cancer drug and an antihypoglycemic medication, respectively. 0 V and -1 V for 20 s were applied alternately every 5 min. The red arrows indicate the release of drug that corresponds to application of electric stimuli.

We have demonstrated that our strategy is effective by using a well-known copolymer, Eudragit S100, as a model carrier. Eudragit S100 is used in enteric coatings of drugs such that the polymer remains intact in the acidic pH of the stomach, but dissolves fast in the more alkaline small intestine, thereby releasing drugs. In our work, we have repurposed this polymer and shown that drug release can be turned on or off on demand at neutral or body pH with the application or removal of electricity. The amount of drug released can be increased or decreased by controlling the magnitude of electric potential or current applied (Fig. 1D and 1E). It should be noted that while larger voltages and currents (on the order of tens to hundreds of volts and several milliamperes) can cause damage to tissues, our device operates at less than 2 volts and only a few hundred microamperes.

Importantly, we have shown the generality of this method by releasing five different molecules, including meloxicam, an anti-inflammatory drug, and glucagon, an antihypoglycemic medication, both of which can benefit from an on-demand delivery scheme (Fig. 1F and 1G). Although Eudragit S100 is used as a model, our strategy can be extended to other pH-sensitive polymers as well. The demonstration that such an electroresponsive drug delivery system can be built from completely nontoxic, FDA-approved, biocompatible materials that respond to relatively low voltages (<-2 V), represents a major advance in the field. In the future, our drug delivery system could be coupled to bioresorbable electronics to treat chronic diseases that necessitate repeated drug doses, including cancer, neurological disorders, and chronic pain.