In the Emergency Department (ED), patients are initially assessed in a process called “triage.” The patient’s chief complaint is documented along with his or her vital signs, including: heart rate, blood pressure, temperature, respiratory rate, and oxygen levels. The triage process attempts to sort patients so that the sickest can be seen the quickest. This initial screen is a critical first step in the treatment of patients, and every minute can matter when it involves the care of patients with severe disease such as “sepsis” or “septic shock”.

Sepsis is a state of inflammation that affects the entire human body. It is the reaction of the immune system against an infectious process. When sepsis becomes severe enough it can cause a life-threatening condition called septic shock. During septic shock the organs, tissues, and cells of the body do not receive the oxygen and nutrients required for life, and blood pressure becomes dangerously low. Untreated bacterial infections of the kidneys, lungs, skin, blood, digestive tract, or central nervous system are the most common causes of sepsis.

Septic shock is not a rare event; in fact it affects approximately 230,000 patients in the USA each year, with more than 40,000 deaths. Multiple large research trials have shown that the best outcomes for patients with septic shock happen when they are treated early and aggressively with antibiotics and lots of fluids through an intravenous catheter (IV). This can prove difficult in a crowded ED when many patients do not appear outwardly very ill until late in the disease progression. Diagnosing and treating these patients quickly is definitely an area in which patient care can be improved.

Our study at the Medical University of South Carolina (MUSC) in Charleston, SC showcases how an automatic alert built into the Electronic Health Record (EHR) system (the electronic “medical chart”) during the triage process can lead to a significant reduction in time to identify, and then time to start appropriate treatment for patients with sepsis. The alert automatically triggers when healthcare providers enter abnormal vital signs into the EHR (the actual criteria are included in Fig. 1). It prompts both the nurse and the physician to quickly assess the patient, as well as provides a quick way for the treatment of sepsis and septic shock to be ordered and initiated. 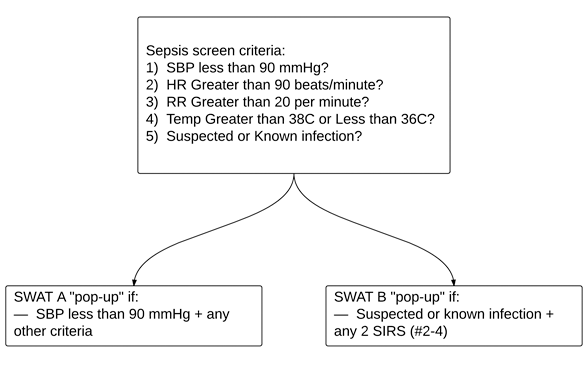 Fig. 1. This is our triage sepsis alert, which is written into the background of the electronic health record. SWAT A and SWAT B designate the severity of illness, with SWAT A patients generally being more ill. (SBP = systolic blood pressure, HR = heart rate, RR = respiratory rate, SIRS = systemic inflammatory response syndrome).

We found that after the implementation of this EHR-based triage “sepsis alert”, or as we call it at MUSC – the sepsis workup and treatment protocol (SWAT) – patients with the clinical diagnosis of sepsis and septic shock received fluids through an IV around 31 minutes faster than before, and antibiotics were given to patients an average of 59 minutes faster. Both of these differences were “statistically significant” (in other words, not due to chance), although it should be noted that we did not find a difference in overall mortality (death) rates in the groups before and after the new SWAT protocol and alert.

With EHRs being the obvious future of data collection and patient documentation in healthcare it seems prudent for the system to help healthcare providers spot and treat the sickest patient faster. Our study could be a model for other hospitals as it significantly expedites the treatment of some of the sickest patients to come through the front door of the hospital.