EML1: an entry point to study cellular mechanisms at the origin of brain malformations

Cerebral cortical development is a tightly regulated process, depending on dividing progenitor cells that ultimately produce neurons that then migrate to find their appropriate positions in the developing cortex. Certain genetic conditions as well as environmental factors perturb cortical development, resulting in severe cortical malformations such as microcephaly (‘small brain’), lissencephaly (‘smooth brain’) or heterotopia (abnormally positioned neurons), associated with intellectual disability and epilepsy. It is crucial to understand the different steps of cortex development (cell proliferation, neuronal differentiation, migration, synapse formation and circuit establishment) to shed light on the mechanisms that go awry in these severe brain disorders. 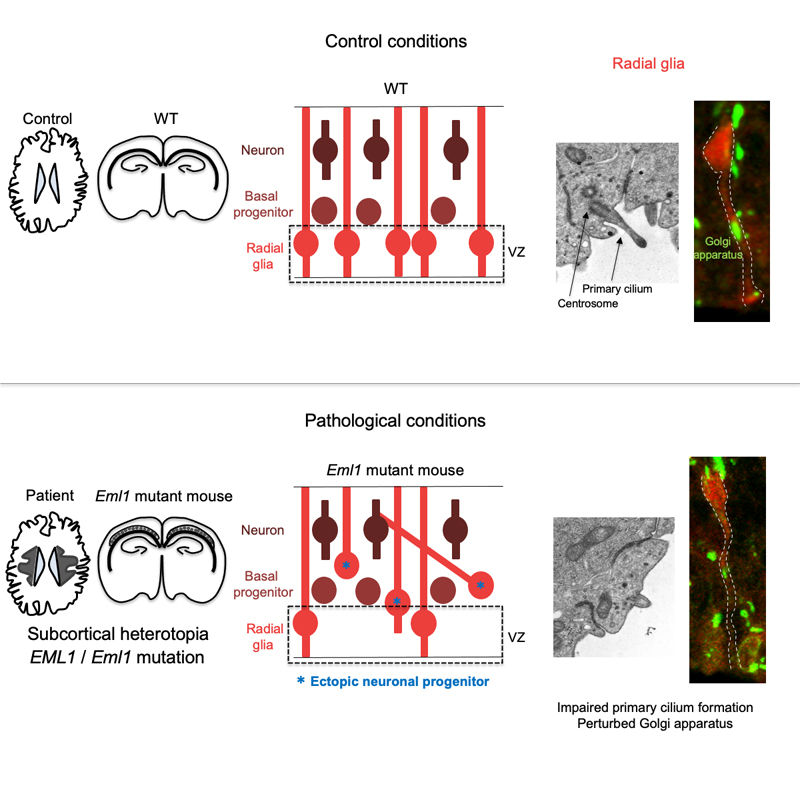 Genetic studies have revealed mutations in cytoskeleton genes affecting different steps of cortical development including neuronal progenitor behavior and neuron migration. One such gene, EML1, codes for ‘Echinoderm-microtubule associated protein 1’ that binds to the microtubule cytoskeleton. EML1 mutations have now been identified in six families presenting severe subcortical heterotopia, corpus callosum abnormalities and macrocephaly. Concomitant to the identification of the first families presenting EML1 mutations, we characterized a spontaneously arisen Eml1 mutant mouse, also presenting subcortical heterotopia. Only rare models for this malformation have been described and EML1 remains one of the only genes known to cause this pathology both in rodent and human. Therefore, Eml1 mutant mice represent a unique entry point to study mechanisms at the origin of heterotopia.

From early stages of cortical development, Eml1-mutant mice show misplaced neuronal progenitors, dividing outside of the normal proliferative zone. We focused on understanding which subcellular processes were hindered due to Eml1 loss, potentially prompting these progenitors to leave the germinal zone and divide in other regions of the cortex.

The centrosome and primary cilium are microtubule-based subcellular structures known to control several aspects of progenitor behavior including cell cycle dynamics and maintenance of polarity. Through confocal and electron microscopy analyses we discovered that at early stages of cortical development, these microtubule structures were reduced in number and aberrant in Eml1 mutant progenitors localized in the germinal zone. Additionally, we discovered that fibroblasts from EML1 patients also showed similar abnormalities when compared to control fibroblasts. When inducing cells to enter a quiescent state and thus grow a primary cilium, we observed that EML1 mutant fibroblasts did so to a lesser extent than control cells, pinpointing defects in the assembly of primary cilia.

Although Eml1 associates with the microtubule network within the cell cytoplasm, we did not observe its presence within the primary cilium compartment. Thus, rather than directly affecting primary cilium growth, Eml1 loss was likely to impact upstream mechanisms. Protein transport from the Golgi apparatus to the primary cilium is key to ensure proper formation of this organelle. Therefore, we examined this structure as well as Golgi-to-plasma membrane trafficking in Eml1-mutant progenitors. Our analyses revealed that not only the ultrastructure and location of the Golgi apparatus were perturbed but also trafficking was hampered in Eml1 mutant progenitors. Thus, the combined perturbation of the Golgi apparatus and primary cilia in Eml1 mutant progenitors may trigger the detachment of these cells from the proliferative zone, leading them to divide in aberrant positions in the cortical wall, and initiating the heterotopia phenotype.

Our work hence uncovered an unprecedented role for the heterotopia protein Eml1/EML1 in primary cilium formation, pointing to the Golgi apparatus as an upstream regulator involved in the etiology of this disorder. By studying the role of Eml1 in progenitors, we shed light on cellular pathways little studied in these cells and neurodevelopment in general, which are at the origin of severe cortical malformations, such as heterotopia.