In this work, we analyzed a massive database of brain connectivity data from the Allen Mouse Brain Connectivity Atlas, which contains data from experiments where researchers inject viral tracers into different regions of the mouse brain. The tracer then follows the fibers connecting the brain to reveal the set of brain regions connected to that target region. These data allow us to understand how this web of brain interconnectivity is structured.

Schematic of hubs and non-hubs in the mouse brain. Hubs are highly connected brain regions that mediate much of the signal traffic flowing across the brain.

Consistent with previous work looking at the brains of worms, cats, macaques and humans, we found that the mouse brain contains a small number of highly connected ‘hub’ brain regions that have an unusually large number of connections to the rest of the brain. These regions are called ‘hubs’ in analogy to hubs of the international airport network (like London Heathrow) that are highly connected to other international airports. The integration of information in the brain is thought to occur across the brain’s network of connections via these highly connected ‘hubs’ of the brain — much like a large proportion of air passengers fly across the world via airport hubs like London Heathrow and JFK. This is important because our thoughts, feelings, and consciousness rely on this integration of information in the brain.

Having confirmed the presence of hubs in the mouse brain, we then investigated whether they were associated with some distinctive genetic signature. The expression of genes involves reading part of your DNA to produce a particular molecule, and different parts of the body (including different parts of the brain) produce different molecules to function. If brain connections are like the ‘hardware’ connecting different regions of the brain, then this gene expression is kind of like the ‘software’ running at each brain region. We built up a picture of the expression levels of over 17,000 genes in each of 213 brain regions (like a massive barcode containing 17,000 numbers), and then measured the similarity of all pairs of brain regions by how similar these gene expression barcodes were. This is like asking the question: which pairs of brain regions are running the most similar software? Could it be those involving hubs?! 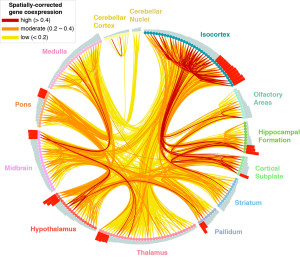 A visualization of the connectivity between different areas of the mouse brain (shown as small circles along the perimeter of the ring). The number of connections each region has with the rest of the brain is visualized with a bar outside the ring, which are colored red for highly connected hub regions. The similarity of gene expression of a pair of connected regions is shown using color, from low (yellow), moderate (orange), to high (red).

Our findings suggest that not all brain connections are equal – connections involving brain network hubs have a highly distinctive pattern of gene expression, marking hubs as energy hungry control centers of the brain. This suggests that the association between brain disorders and dysfunction of brain network hubs may be related to the regulation of energy that is required to meet the high activity requirements of these critical brain areas.

A transcriptional signature of hub connectivity in the mouse connectome.
Fulcher BD, Fornito A
Proc Natl Acad Sci U S A. 2016 Feb 2