Enrichment, quantification and glycan analysis of prostate cancer oncomarker in a single step

In recent decades, there is an increasing trend in prostate cancer occurrence and mortality worldwide, caused partly by a more available diagnostics, prolonged life period but also increased risk factors present in the environment. Most commonly, age is a strong “risk factor” for a prostate cancer. During a screening, digital rectal examination and PSA (prostate specific antigen) level in blood are commonly investigated. If either of these markers is considered suspicious, free PSA level (fPSA%) is also determined. As a next step, patient should undergo a biopsy to confirm/distinguish prostate cancer and benign conditions, such as hyperplasia (a common condition in older men). Recently, glycosylation of a PSA was shown to strongly correlate with a malign disease occurrence and progression. Different features, such as increased branching, fucosylation and increased α-2,3-sialylation are present. There is a widely accepted premise one needs to analyze more than just one type of serum oncomarkers to make the diagnostics more accurate, such as the combination of nucleic acids and proteins. In our recent study, we developed a sensitive device for the determination of PSA glycosylation and the PSA enrichment from real human samples –  in a single step. 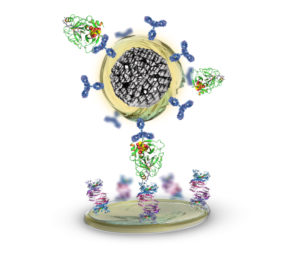 Fig. 1. Schematic presentation of a sandwich format of fPSA glycoprofilation. The modified electrode interface with immobilized lectin (lower part of the picture) is used for the glycoprofilation after a successful binding of fPSA (green backbone) in a complex with antibody-modified microparticles with a magnetic core.

At first, microparticles with a magnetic core and gold surface were prepared. The surface was subsequently modified with a zwitterionic (betaine derived diazonium compounds) derivatives to resist any non-specific interactions. These particles were subsequently modified using anti-fPSA antibody, and were applied to a diluted human serum sample. The fPSA bound to these particles was subsequently let to interact with an electrode surface modified with the same diazonium compound modified with a lectin (glycan-binding protein). This way, the fPSA glycosylation could be accurately measured using label-free electrochemical technique, such as electrochemical impedance spectroscopy. In a clinically relevant range, this method was shown to accurately measure fPSA concentrations (with a recovery index of 108%). Using different lectins (with a different specificity), it should be possible to accurately estimate the glycoprofile of this oncomarker in a real sample. Moreover, PSA is present in blood in two different forms – as a free enzyme (fPSA) and in a form of a complex (bound to serine protease inhibitors, such as α-2-macroglobulin and antichymotrypsine). It is an important issue to accurately estimate the glycosylation of a marker, that is organ-specific (fPSA), and not other glycoproteins, that are not affected by organ-localized cancer disease, such as the latter protein in a complex with PSA.

This method yields several advantages – compared to commonly used methods applied in the area of glycobiology (such as mass spectrometry), it is less expensive, time- and sample-consuming, with the possibility for a miniaturization. However, since there is still a wide range of so-called grey zone in the PSA (fPSA) level in blood for reliable diagnostics (most commonly specified between 4-10 ng mL-1), there is a need for new prostate cancer biomarkers (with higher specificity and sensitivity), or a combination of these.