The selectivity of biological processes, within living organisms, is driven by the information contained within linear macromolecules: DNA and proteins. While information in DNA is written within the long sequences using different combinations of 4 different nucleotides, information in proteins is also written within long sequences, but using different combinations of 20 amino acids. DNA carries the complete backup information of any organism, but proteins are macromolecules that read the necessary parts of DNA information to actually perform all selective biological activity through a number of very specific interactions.

The meaning and influence of light to biomolecular processes/interactions and consequently to health has been analysed using the Resonant Recognition Model (RRM), which proposes that biological processes/interactions are based on electromagnetic resonances between interacting biomolecules at specific electromagnetic frequencies within the infra-red, visible and ultra-violet frequency ranges. Each interaction can be presented by the certain RRM frequency critical for resonant activation of specific biological function of DNA and proteins. 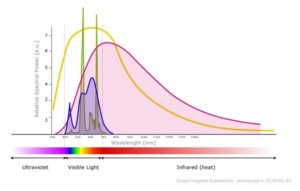 Fig. 2. Diagram of the spectrum a LED lamp (blue), a CFL (green) and an incandescent (purple) superimposed the solar spectrum (yellow).

Here for the first time, the environmental light electromagnetic radiation was investigated as source and influence of biomolecular interactions, related biological functions and consequent health effects. In addition, the relationship between the theoretical Resonant Recognition Model (RRM) and sun light, as origin of life, gives the possible explanation on how life processes have evolved and are controlled in more complexed organisms, where the sun light could not penetrate all cells and cellular processes. Although biological processes are currently looked as a large number of different events, we have shown that they are grouped in a relatively small number of general functions enabling the simpler approach to understanding macromolecular interactions, biological functions and related health effects. Accordingly, the role of water and possible influence of artificial light on biological processes has been shown. Having all this in mind, we can conclude that the Resonant Recognition Model (RRM) is a powerful tool in analysis of DNA and protein functions/interactions, which are proposed to be based on resonant electromagnetic energy transfer.