Epileptic encephalopathies in children: Animal models may change the word “catastrophic” to “hopeful”

Seizures are a sign of brain dysfunction caused by abnormal, hyperexcitable brain circuits. Clinical seizures range from brief staring spells to massive whole – body convulsions. The developing brain is especially prone to seizures and seizure-related brain damage. Epileptic encephalopathies (EE) are one class of epilepsy in young children in which the seizures themselves cause further neurological impairment. EE are often described as “catastrophic”, reflecting their association with lifelong disability. EE are extraordinarily difficult to treat with medicines and they exact an immense toll on the lives of patients, families and the health care system. Yet, our understanding of the basic mechanisms of EE is woefully incomplete, which limits the development of effective new therapies.

Fig. 1. Like human epileptic encephalopathies (EE), animal models of EE comprise numerous etiologies that affect brain development and function. In EE, it is presumed that the seizures (here depicted as yellow lightning bolts) themselves are a major determinant of outcome. Treatment at various time points are aimed at improving outcomes.

This article reviews recently described animal models of EE, allowing study of the causes, mechanisms and consequences of severe seizures during brain development. Although it is very difficult to replicate clinical features of human EE in animals, at the molecular and cellular levels, nervous system function is similar regardless of species, and there has been substantial recent progress in creating EE models to enhance our understanding of these devastating epilepsies.

The question arises: Do these EE models provide any clinical clarity? The answer is yes, when appropriate neurobiological hypotheses are posited and when it is acknowledged that none of the models exactly mimics the human disorder. The chronic models (ARX mutations, TTX, multiple toxin, chronic stress) all have spasms or chronic seizures, allowing assessment of neurobehavioral consequences and permitting clinical trials. The evolution of spasms to other seizure types is seen in several models and this certainly occurs clinically, making this an important phenomenon to unravel. The acute models, in which spasms-like seizures occur only after application of an inciting agent, can inform about mechanisms underlying seizure susceptibility, generation, and spread. The genetic models (ARX, Down syndrome) mimic human disease more directly, increasing understanding of how these gene mutations engender neuronal hyperexcitability. All the models can be used to explore the peculiar age-specificity of the epileptic encephalopathies, which are undoubtedly a function of the myriad developmental processes occurring early in brain development. 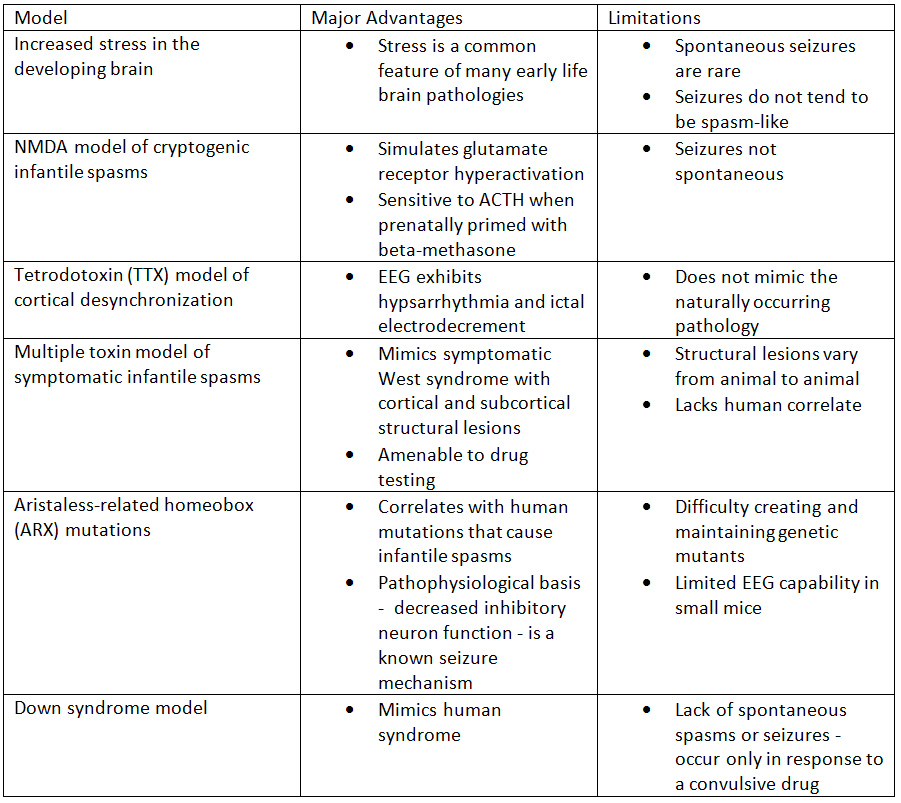 Finally, responses to novel and established treatments can be screened in these models. In human West syndrome, all-or-none responsiveness is expected of a successful treatment, with cessation of both hypsarrhythmia and spasms. The clinical goal is often more modest – improving quality of life, reducing seizure burden, and minimizing medications used. Antiepileptogenic and disease-modifying therapies may emerge, and the roles of anti-inflammatory treatments, epigenetic influences, and environmental enrichment will become clear as potential mechanisms and treatments are studied using animal models in coming years.