Epithelial wound healing: a matter of life and death

Wound healing is a crucial property for the maintenance of the structural and functional integrity of an individual. In the whole organism it usually requires the participation of many cellular types. The fundamental aspects of wound healing, however, can be studied employing isolated tissues in culture. Under this condition, the discontinuities in the cultured tissue produced by experimental injuries are restituted by two main processes: migration and proliferation of the cells at the wound borders. In non-injured tissues, both in culture and in situ, these processes are subject to tight control mechanisms. Thus, for instance, when an epithelial tissue has reached its final stage of development and maturation, the proliferation rate is kept to a minimum. In well developed epithelia each cell establishes close contacts with its neighbors and the underlying support (the cell substrate), a fundamental property to prevent cell detachment and migration. In the whole organism, the cells that overcome this control represent a potential menace, since they could invade and colonize other distant tissues. Cells have developed further mechanisms to control this contingency, most importantly, programmed cell death. In this way, a normal epithelial cell that disengages from its substrate activates a cell death program. Employing a model of bovine corneal endothelial (BCE) cells in culture, we found that many of the cells that actively migrate to cover the injury area die by apoptosis, a specific type of programmed cell death. 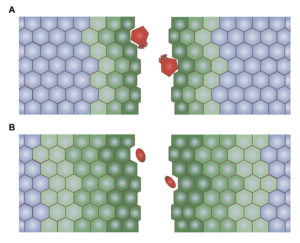 Fig. 1. Once a wound is produced, the dying (in red) and the border cells undergoing mechanical stress release factors that determine the propagation of signals towards the rest of the tissue. The figure represents the initial stages of the calcium wave (in green) at two successive time points (A and B, respectively).

A mechanical wound triggers signals that propagate from the border cells toward the rest of the tissue. These signals stimulate diverse cellular processes involved in the healing response, such as migration and proliferation. One of the best characterized signals is a calcium wave, a transient increase (i.e., lasting few minutes) in cytosolic calcium produced as a consequence of the release of factors from the cells that died or experienced mechanical stress during the injury (Fig. 1). The main purpose of our study was to investigate the role of the calcium wave in the proliferative and apoptotic responses of BCE cells in culture during wound healing. For this, we performed a pharmacological inhibition of the calcium wave. The inhibition was applied only during the duration of the wave and had no consequences on the cell viability. As shown in Fig. 2, in the absence of the calcium wave the proliferation rate of the cells at the wound border is slightly lower and the apoptosis is much higher than in the untreated (control) cells. These results suggest that the calcium wave is involved in the stimulation of cell proliferation and in the inhibition of programmed cell death during wound healing in BCE cells. 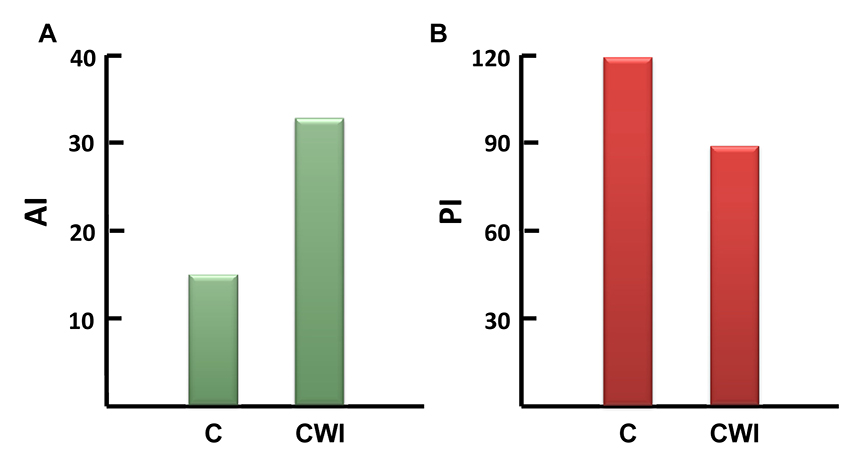 Fig. 2. Effect of calcium wave inhibition (CWI) on the apoptotic (AI) and proliferation (PI) indexes during wound healing in BCE cells in culture. AI was measured as the number of apoptotic bodies and PI as the number of nuclei performing DNA synthesis, both per linear millimeter of wound. Data taken at 18 (A) and 24 (B) hours after wounding. C: control tissue (i.e. without inhibiting the calcium wave).

As mentioned above, programs of cell death are activated to dispose of potentially harmful migrating cells. Since wound healing requires the migration of a large number of cells to restitute the integrity of the damaged tissue, an excessive apoptotic response is disadvantageous. Our findings permit us to suggest a new physiological role for the calcium wave, to prevent an excessive cell death and promote sufficient cell proliferation during wound healing, and hence contribute to an efficient process of restitution of an injured tissue.