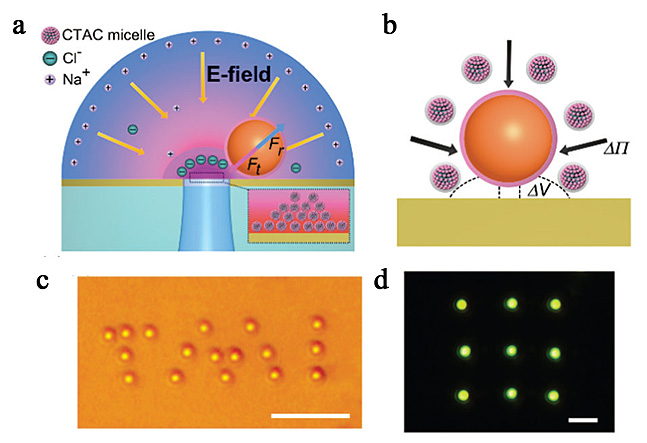 To overcome those limitations, Linhan Lin, Xiaolei Peng, and Yuebing Zheng, engineers at The University of Texas at Austin, have conceived and developed an opto-thermoelectric printing (OTP) method in a low-power and reconfigurable manner. OTP is based on the Seeback effect, i.e. thermoelectric fields arising from the concentration gradient of ions in fluids, which drive the migration of colloidal particles in a light-controlled temperature field. OTP enables real-time trapping and printing of colloidal particles at single-particle resolution, as well as selective erasing and reprinting.

In the system of OTP, a mixed solution of colloidal particles, NaCl, and cetyltrimethylammonium chloride (CTAC) molecules was put above an Au substrate. CTAC molecules decompose into CTA+ groups and Cl– ions in the solution. CTA+ groups modify the surface of colloidal particles to positively charged. CTA+ groups also self-assemble into positively charged micelles, i.e. aggregates of CTA+. Once a laser beam was focused onto the substrate, a temperature gradient is created at the substrate-solution interface, where the temperature is the highest at the beam center and rapidly decay to room temperature as the distance to the beam center. Since Na+ ions move faster than Cl– ions in the temperature gradient, Cl– ions accumulate at the hot region while Na+ ions accumulate at the cold region, leading to a thermoelectric field E directing from the cold to hot region. Under the thermoelectric field E, positively charged particles are delivered and trapped near the beam center, balanced by a repulsion force from the accumulated CTAC micelles (Fig. 1a). When the temperature gradient is enhanced through increasing the laser power, CTAC micelles at the particle-substrate gap are drained and the gap distance is reduced (Fig. 1b). As a result, an osmotic-pressure from the micelles in the solution prints the particles onto the substrate. For demonstration, seven 1 mm polystyrene (PS) spheres were printed into a “TMI” pattern while nine 500 nm PS spheres into a 3 ´ 3 array (Fig. 1c-d).

Reconfigurable printing was achieved by centering the laser beam with the printed particles. The accumulation of CTAC micelles in the thermoelectric field breaks the particle-substrate bonding and releases the particle back into the solution (Fig. 2a). As an example, initially printed “sad”-face pattern of 2 mm PS spheres was transformed into a “smiley”-face pattern by selectively releasing one of the printed spheres and reprinting it at a new site (Fig. 2b). With the low-power and versatile operation, OTP will find fascinating applications in colloidal sciences and nanofabrication. The work acknowledges the financial support of the Beckman Young Investigator Program.