It is well – known that continuous exposure to ultraviolet ( UV ) radiation from sunlight can cause mild to severe skin damage, characterized by wrinkles, inflammation, photoaging, pigmentation, photo – carcinogenesis, photo – dermatoses etc. Most of these adverse effects are caused by UVA (320-400 nm) rays, which trigger the cellular reactive oxygen species (ROS) production. Overwhelming production of ROS eventually causes oxidative damage to cellular proteins, lipids and DNA that is terminated by death of healthy skin cells. In order to avoid the UVA-induced skin damage, skin protective agents, such as sunscreen lotions or creams are developed and have been widely used for years. However, most of these skin protective agents are relatively less effective against UVA phototoxicity and/or not affordable for many people to use regularly. Yet, there is dearth in developing of the novel and effective skin protective agents that could prevent the UVA-induced signs of early aging. To reach this goal laboratory investigations are undergoing to explore the biochemical changes occurs during UVA-induced skin damage. Since UVA-induced ROS and subsequent oxidative stress played a significant role in skin damage, increasing of skin cells’ antioxidant capacity by antioxidants supplement could be a valuable strategy to prevent the skin damage. 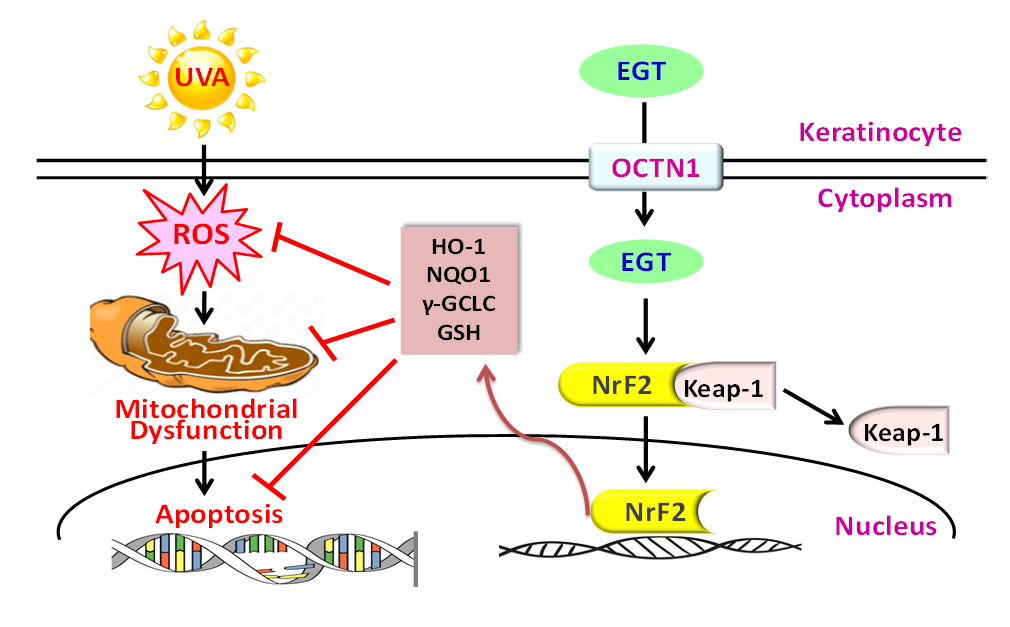 L-Ergothioneine (EGT) is a low-molecular-mass thiol based antioxidant (naturally occurring amino acid) that can be synthesized by certain mushroom species, and high levels of EGT can be found in red and black beans, red meat, liver, kidney and grains. EGT has been used in preparation of many cosmetics and skin care products. Some laboratory studies demonstrated that human skin cells can take up, accumulate and utilize the EGT and its transporter protein OCTN1, as an integral part of antioxidant defense system and skin protection. Millimolar concentration of EGT treatment has been reported to protect the human skin cells against UVA/visible light-induced DNA damage. In this context, we used nanomolar concentrations of EGT (125-500 nM) and demonstrated its dermato-protective effects on human keratinocytes against UVA-induced adverse effects.

Experimental evidence from our study confirmed that EGT pretreatment reversed the UVA-induced cell death, ROS generation, DNA damage and apoptosis of keratinocytes. Mitochondria, the key cell organelles for survival found to loss their membrane potential and antioxidant capacity upon UVA exposure. However, EGT treatment prior to UVA irradiation prevents the loss of mitochondrial membrane potential, and correspondingly increased the intracellular glutathione levels. Maintaining of intracellular glutathione homeostasis is fundamental to keep the balance between pro- and antioxidants, and to escape the cells from ROS-induced destructive damages. These protective effects in our study are accompanied with increased antioxidant genes, such as HO-1, NQO-1 and γ-GCLC in EGT pretreated keratinocytes. Elevation of these antioxidant genes under stress condition is mean to eradicate the toxic free radical or ROS, thereby enhance cell survival. By this action, EGT restored the ruined antioxidant homeostasis, and boost skin cells’ antioxidant capacity to fight against UVA irradiation. Most importantly, EGT-induced increased antioxidant capacity is found to be mediated via activation of Nrf2/ARE signaling pathway. Nrf2 is an oxidative stress marker, which translocate into nucleus under stress, and recruits the small Maf (sMaf) protein. The Nrf2-sMaf complex then bind to ARE (antioxidant response element) that activate the promoter region of many genes encoding antioxidants. EGT increased Nrf2 translocation and ARE activity is considered to be the key molecular phenomenon in protecting the skin cells against UVA damage. Furthermore, silencing of Nrf2 or EGT transporter protein (OCTN1) signaling with siRNA showed no such protective effects of EGT against UVA-induced cell death, ROS and apoptosis. These experimental evidence convinces the vitality of Nrf2 translocation and EGT protective efficacy in preventing the UVA-induced skin damage. Based on these results, our study suggest that EGT can be used as a key substance to treat UVA-induced skin damage, and also can consider to use in developing of novel skin care products or healthy sunscreens.