Cellular adaptation to environmental changes often entails transcriptional responses that promote survival and proliferation. In certain cases, “memory” of previous experiences promotes a much faster transcriptional response upon second exposure to the same stimuli, leading to faster adaptation. This phenomenon called the epigenetic transcriptional memory can be inherited through several cell divisions. How such epigenetic phenomena evolved and their contribution to fitness is not well understood. We addressed these questions using the GAL genes in baker’s yeast Saccharomyces species as model. 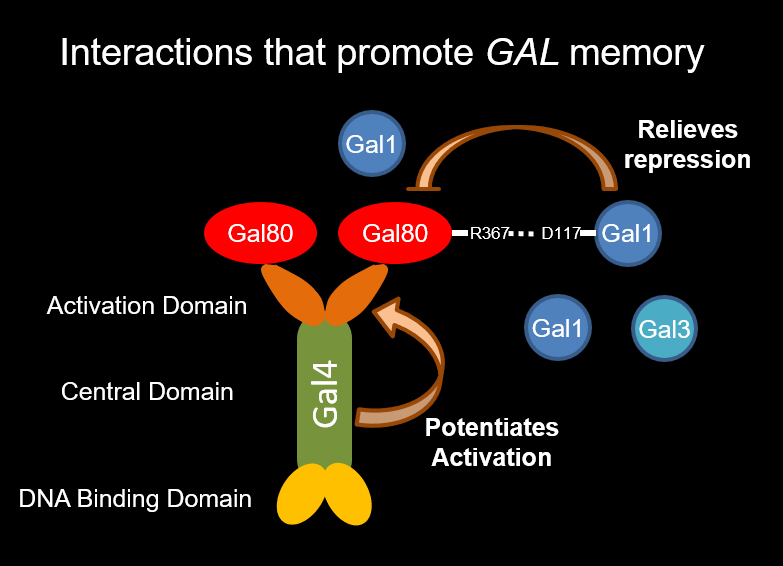 The GAL genes encode proteins that are required for growth in galactose and are tightly repressed in glucose. When cells are shifted from glucose to galactose the initial rate of GAL gene transcription is very slow, leading to a long lag phase before cells begin to divide again. However, cells that have previously grown in galactose before being shifted to glucose induce the GAL genes rapidly. This phenomenon persists for eight generations after shifting cells to glucose. The explanation for this difference has to do with the concentration of critical transcription factors. During the initial induction, most cells have fewer molecules of the Gal3 coactivator relative to Gal80 repressor. As a result, the expression is heterogenous and only some cells respond during the early phase of induction. During memory, on the other hand the expression is homogenous and fast due to presence of Gal1, which is very similar to Gal3 (Fig. 1). Gal1 is abundantly produced in the first round of induction and is then diluted gradually with each cell division. Gal1 is both an enzyme and a Gal3-like coactivator. The residual Gal1 left after eight generations is sufficient to relieve Gal80 inhibition of Gal4 transcription factor.

We found that faster expression of GAL genes during memory confers a huge fitness advantage eliminating the lag phase upon shift from glucose to galactose. A genetic screen uncovered a point mutation in GAL1, gal1-D117V, that specifically abrogated transcriptional memory. Asp117 in Gal1 forms a salt bridge with an arginine in Gal80 and this mutation disrupts this interaction. The mutant Gal1 neither binds to Gal80 nor relieves its repression, resulting in loss of memory. Our screen also identified a novel role of Gal4 central domain in potentiating Gal4 activation levels during memory. The central domain of Gal4 was considered as an inert linker that bridges the N-terminal DNA binding domain and the C-terminal activation domain of Gal4. We show that this domain potentiates Gal4-mediated activation and disrupts memory. 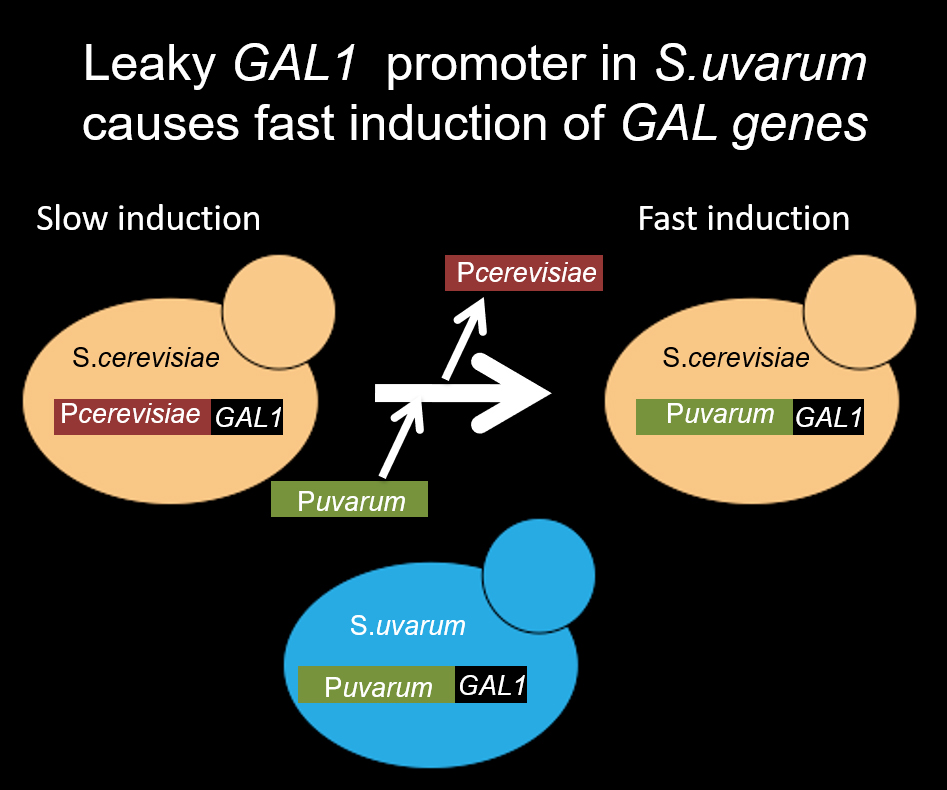 GAL transcriptional memory evolved from an ancestral state after the expression of GAL1 became more completely repressed in S. cerevisiae. In a related yeast species, S. uvarum, previous growth in galactose does not improve adaptation to galactose. Rather, the rate of GAL gene induction and adaptation to growth in galactose is always fast in S. uvarum. This is due to leaky GAL1 expression in S. uvarum. By swapping the GAL1 promoter in S. cerevisiae with the GAL1 promoter from S. uvarum (Fig. 2), this rapid activation of GAL genes and adaptation to growth in galactose was recapitulated. While advantageous in galactose, we found that the leaky GAL1 expression hampered growth in mixtures of glucose and galactose. Thus, leaky GAL1 expression is a double-edged sword, providing an adaptive advantage in some conditions and a fitness cost in others. Epigenetic GAL1 transcriptional memory provides a mechanism to both maximize fitness in the presence of glucose and to reclaim fitness benefits upon second exposure to galactose.